Check out recaps of other episodes by clicking the the Project Runway tab. 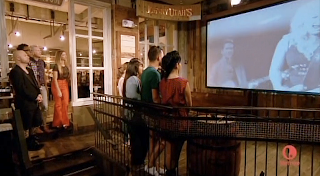 Note - one negative this season I would like to mention is that the lighting on the runway - hence the images I can offer - isn't great at times.  On dark garments the details don't pop. Something the producers should think about improving next season.

From now on the teams on Project Runway get mixed up quite a bit.  Today it's with the use of the hated button bag! Before the designers were put into pairs, Heidi Klum admonished them to choose wisely, "It is increasingly important that your voice be heard." RIGHT!

Let's be real. The first few buttons selected had a big choice - those they chose had none.  The buttons drawn in the middle received some choice - those they chose had none. And the last 2 were just plain stuck with each other.  So of the 8, in reality only about 4 people had some decent influence on who they worked with. Being told to chose wisely was a fallacy which only added to their stress.

To receive their challenge instruction, the designers were sent to a bar - Johnny Utah's. The new client turned out to be one of country music's biggest stars - Miranda Lambert - whose look is definitely contemporary Country Western. Each team was to create both a performance look and a red carpet look. For inspiration they were able to view a video of the singer on stage performing and there was a dossier available featuring looks she had worn in the past. Tim Gunn added a few helpful hints - for performances Lambert wanted a look that was a little bit country and a little bit rock and roll. For the red carpet look her preference was chic, young, fresh and not overly designed. She also loves her curves and wanted to see them celebrated. Each team could break up the work anyway they want and the 2 looks did not have to be cohesive. 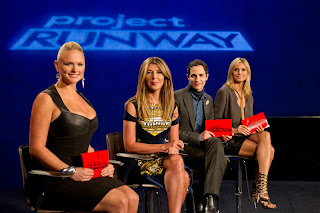 Tim warned them they were going to be judged as a TEAM. "If you have the most amazing look on the runway, but your teammate is a stinkpot - not that there's any stink pots here - you cannot win."  One person from the top team wins, one person from the bottom teams goes home. They were then given 30 minutes to consult, 30 minutes to shop at Moods and $400 per team. No surprise the guest judge this week was Miranda Lambert.

Now to the judging. The team challenge did keep a few contenders sidelined. I also have to admit I was surprised to see so much black on the runway. The garments were for stage and the red carpet. To see a mostly black palette was a disappointment. Only one designer really stepped out of the shadows in terms of colour - Kate.

The top 2 teams were Richard/Stanley (Richard took the win) and Amanda/Benjamin. I actually really loved Richard's dress from the front as did all the judges. There was a bit of drama in the workroom as he forgot to buy lining for the mesh dress. After finding no extra fabric around, he cut up 2 black Mood's t-shirts to make a small tube dress for underneath. Richard was lucky that he and Stanley had purchased them with extra challenge money or they couldn't have been used. He would have had to send a see-through dress down the runway risking elimination. Instead he won. What I personally didn't like about his garment was from the side seams back it was just a plain black dress.  As long as she was facing the audience it was great, but turn sideways and the pow is gone. The judges didn't seem to mind this, but I found it jarring. A stage costume should look great from all angles. Stanley's dress received mixed reviews mainly because there was way too much volume in the skirt. I think the other negative is the plunging neckline is far too wide for such a busty client. The bodice would definitely need to be reworked if Lambert were to wear it.

I personally loved the look and styling of Amanda's dress. Still had that great swing PLUS the back is similar to the front. If she turned on stage to face a band member, you would see the same interesting design and movement. Amanda also created all the fringe herself from fabric - a lot of work. Shine was added with a great necklace, a detail which would have let Lambert make the look her own. Well done! Benjamin's dress looked deceptively simple. There was an entire built-in undergarment that would work well on a fuller figured woman - no Spanx needed. Lambert was unsure, but the rest of the judges thought it would be a dynamite look on her.  The image doesn't show it - but there is a nice detail on the right bodice to give interest and shimmer and at least it was a deep blue instead of black.

I want to give you a chance as well to see some of the other great looks. Remember - the top 2 were chosen for the team's combined scores and then the winner chosen from there. Same with the bottom teams. I liked the offerings from Patricia (great swing) and Layana's (great neckline for Lambert, but the slit is a bit too high) and applaud the fact that neither went with straight black.  When it comes to Kate and Tu I only liked one look - Kate's. I loved the hard/soft feel created with the 2 different fabrics and the colour is just bright enough to give it a pow factor without overpowering Lambert. It was so refreshing to see something more exuberant after the sea of black with a little navy thrown in. Tu's was a miss in my eyes - I can't image Lambert ever wearing this.  He is lucky he was paired with Kate. 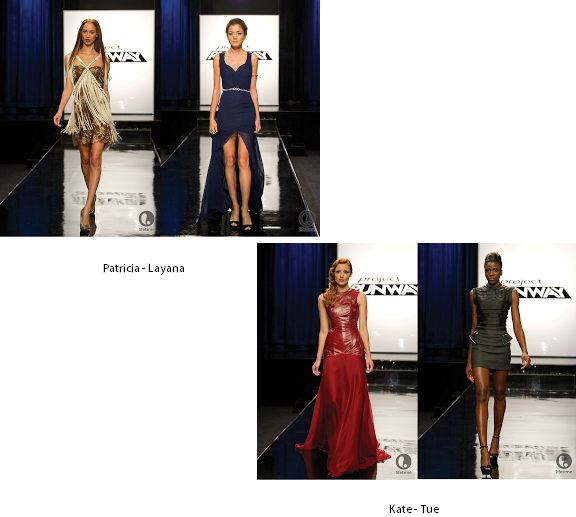 In looking at the images above and below, I think the bottom teams were wisely chosen. The surprise here was the Michelle didn't rise to the top in this challenge.  One thing every judge agreed on was that the leather fringe necklace was a no-go - uninteresting and too dated. Neither looked popped as something fresh or original. Matthew's "red carpet" look fell shortest in the judges eyes.  He was sent home.

The designer that was stunned by his bottom finish was Daniel.  He spent hours hours working on and raving about the Soutache technique he used on the bodice - all done with leather strips. Then he added another element by fringing the hem of the skirt with a fork - a detail that didn't really work with the rest of the dress. I think Daniel forgot Tim's hint that the designer didn't like her clothing over-worked. When all judges panned his design he was floored. While I didn't dislike Samantha's, it just wasn't a stand-out or new. If she had been paired with a different designer, she might have ended up in the middle instead of the bottom. 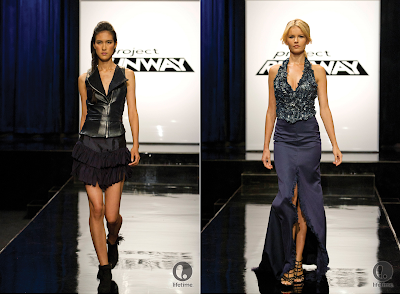 If you would like to see any of these dresses in a larger format, you can go to Rate the Runway on the Project Runway website.
country western Heidi Klum Johnny Utah Miranda Lambert moods Project Runway rate the runway red carpet rock and roll Soutache Spanx stage performance Tim Gunn