on April 05, 2013
Check out recaps of other episodes by clicking the the Project Runway tab. 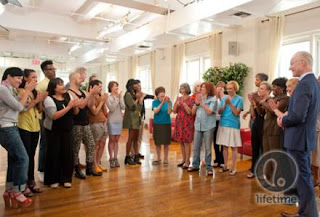 As Michelle had no partner this week to work with, Heidi Klum brings out the dreaded button bag again and places Michelle with Layana and Patricia. Might be just desserts as the designer stated many time she didn't want to work with Patricia. I always wonder if a little bird tells the Project Runway producers these things and they set it up to see the fireworks.

Next the designers head over to the Midtown Loft where the join a group of senior ladies taking a dance class.  You guessed it, these are their clients this week. I love it every time the designers have to try and make someone without a model body look good.  The teams are randomly assigned models and then decide amongst themselves who works with who.  Each team member will make one garment and the looks do not have to be cohesive. Before they get started, Tim Gunn reminds them, "In the real world you work with clients of all ages.  Fashion is both ageless and timeless. You as a designer need to channel who you are through the wants and needs of your client." They are given 30  minutes to consult and sketch, a budget of $200 per look and 1 day to complete the challenge. 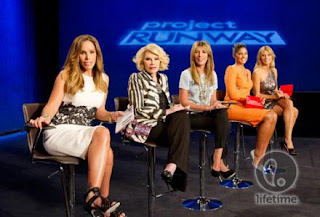 Since Zac Posen was absent this week, his seat was filled by fashion designer Rachel Roy. Then there were 2  guest judges - mother/daughter team Joan and Melissa Rivers. I found Roy to offer very thoughtful comments and hope she will be used more as a judge.  Joan and Melissa brought the sass - no surprise there.

The clients this week were absolutely amazing! They were lively, positive and full of sass.  Each was clear about what they liked and didn't like and in general they were very kind to the designers working with them. Shy Kate's client offered her the advice to get out there and start sleeping around, "Don't believe it's the Golden Years.  Be a slut. Do whatever you want, I'm glad I did!" Benjamin's client was one of the older ladies there, but still full of the devil. When she came for her fitting, she smacked Stanley on the butt as she walked by. Needless to say he was pretty surprised.

I'm going to start by saying again, this team challenge is interesting in some ways, but has been taken too far. Michelle yet again got screwed. I honestly think she had the winning design. Her cliente loved the dress and radiated exuberance on the runway. The choice of print, palette, design and styling were bang on. Layana's was strong as well. Why then were they just given a pass. In the judge's own words Michelle and Layana had the highest scores overall, but they scored Patricia's so low it took them out of the top. Something is wrong when 2 designers have the top score as not all pairings went well as you'll see below. Also, for anyone involved in TV - look at the personality displayed by Michelle's model - someone should find a place to use this woman.  I was captivated by her confidence and energy!

Now to the top teams. Richard did a good job creating a stylish look that was comfortable - something his client really wanted. That said, the silhouette really was a bit bulky. It looked better when she was moving, but this short-coming really pops in the photo. Judges comments included - youthful, easy, chic, but a bit overpowering. Stanley took the win for his great suit. The client originally wanted palazzo pants, but he talked her into the slim legs and it was a great choice. I think he worked with a distinct advantage here - a tall client with a great slim figure. Most of the other women could not have worn this look. I think this should have acknowledged this and factored it into their scores. The judges did note the pants were a tad short and the crotch needed a bit of work, but overall it was very sophisticated.

Now here is where it really gets interesting. Daniel did create a great look, but the judges totally blasted Samantha's. How is it that this team ended up in the top 2 instead of Michelle's team if they really disliked one look?  I don't hate Samantha's as I heard the client talk about what she liked and she admitted she loved it.  Probably the only thing I would change is the weird little sleeves - a bit too young.
Bottom Teams -

I disagreed with the judges choice above to put Daniel's team instead of Michelle's team in the top 2 which would have completely changed the outcome. Now I find I myself again disagreeing with the judging as to who goes home. I have no problem with the 2 teams they put in the bottom - in fact I totally agree - but I do not agree even slightly with the outcome.

Let's start with Benjamin and Kate. Benjamin's client was lovely and she really loved the dress. I think it was definitely a miss and deserved to be in the bottom, but the fact the client was happy should weigh in here. There were problems with fit and construction, but I saw much bigger problems with the other designs offerings and Benjamin's look was finished and polished. Amanda not only selected a horrible print, the silhouette was just wrong and inappropriate for an older woman. The centre back of the dress had a huge tailoring mistake you could see from a mile away. From the back it looked like a beginner sewer's work. The client also didn't care for it. I thought she was a goner for sure if it was one of these two. I just don't get it.


Kate had the unhappy experience of being in the bottom 2 because of Tu. Kate's look was really attractive on her client AND her client loved it. The black top set off her light hair and pale skin and the vibrant print skirt with a bit of fullness spoke of spring and mirrored her happy energy. Tu just had no idea where to go with this challenge and only managed to get a look on the runway because Kate stepped in to help him. the dress was unfinished and held together by a belt. Had it come undone, it would have fallen off. The client was not happy with the dress. So the question now arises, if you have an unhappy client, an unfinished dress held together by a belt, and the judges saying it didn't work anyway because it just had too much fabric - WHY IS TU STILL ON THE SHOW AND BENJAMIN SENT HOME?

While I don't always agree 100 percent with the judges choices, I usually understand where they are coming from.  This week I didn't get who they sent home at all. I would have loved to see someone of Benjamin's talent in the final grouping, or at least on the show for a few more weeks instead of Tu or Amanda.  If he had been the only one to miss the mark, it would have made sense.  BUT add in unfinished garments and unhappy clients and I feel Tu or Amanda were the clear choice.