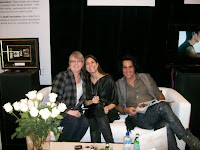 When Vancouver hosted the winter Olympics in 2010, I was offered an opportunity to meet Raphael and Lisa-Marie Mazzucco at the Lancôme Canada launch of their special edition make-up boxes. Fame'd Magazine which I was editor of at the time focused on promoting local. As both were originally from Vancouver, I felt a Behind the Scenes story on their journey to becoming internationally recognized artists would be an inspiring addition to the magazine.

I was able to briefly meet them at the launch, offer a copy of the magazine and ask if they would be interested. While the answer was yes, trying to organize a time in their busy schedule was almost impossible - but in the end a 45 minute slot was found. We sat outside the Opus Hotel where they were staying at a table in front of Caffe Artigiano sipping coffee and laughing constantly. Each added asides to the other's story. They were warm, funny, wildly interesting and oh so much fun to interview. Published in March 2010 - this article is just a very small excerpt of what they shared. Perhaps it's time for a new one! 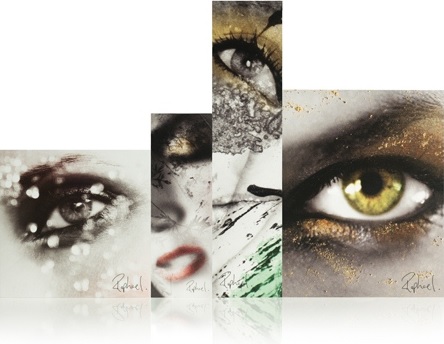 Sitting at a table on Davie Street with Raphael and Lisa-Marie Mazzucco, it quickly becomes clear they are each others number one fan. Raphael is a top fashion photographer with extensive credits including 12 Guess campaigns. Lisa-Marie is a make-up artist who has stepped behind the camera to become the “go-to” photographer for classical musicians. Recently they worked together to create Lancôme's Gold Fascination campaign – a tribute to Canada's elite female athletes. Inspired by Raphael's mixed media artwork, it is a stunning collaboration.

Both artists have their roots in Vancouver. Raphael was born and raised in Coquitlam. At 16 he left for Europe to play amateur soccer and returned to play professionally for the Whitecaps until the league folded. With time on his hands, he picked up a camera. “I loved it. I would just walk around Vancouver and shoot anything. Nettwerk Records started using me to photograph bands and I began to work with model agencies. It was a very quick transition.” Lisa-Marie moved to Vancouver at the age of four. She studied piano, ballet and was a competitive ice skater. Make-up fascinated her from an early age and she was always experimenting. A few stints as a model in Japan followed school and then she was back in Vancouver. The pair met just as Raphael started photography and it was instant chemistry. When Raphael decided to move to Italy, Lisa-Marie was ready to go.

In Milan they lived in a 700 square foot apartment where they produced six shoots a day. Lisa-Marie would do the styling, hair, make-up and then head to the kitchen table to do the post-production work. Raphael would push the furniture aside and use the bedroom to shoot in, then head into the kitchen to cook dinner. “Living in that small space really helped my photography,” Raphael recalls. “We would notice that mistakes could be the most beautiful part of a photograph.” One day the phone rang - a top Italian photographer had called them by mistake. He ended up talking with Raphael for over an hour and introduced him all over Italy. After a few years, the couple decided to head to Amsterdam where they celebrated the birth of their son. While in Amsterdam they both acquired agents and began to work with other artists. Dutch Magazine was a strong supporter of Raphael, providing him pages and pages of editorial work for his portfolio. The couple followed this with a brief stay in Montreal where the worked with clients such as Elle Canada.

Then it was time for their leap of faith – a move to New York which had always been the final goal. “There are moments in your life where if that moment didn't happen, the rest of your life would have taken a totally different direction,” Lisa-Marie remembers. “We were looking for an apartment and I was supposed to take a check to the landlord and I missed him, so we didn't get it. Raphael was upset, I was crying, and then I remembered one apartment we hadn't looked at yet. There was no electricity, no bathroom, no kitchen and it was after dark so we couldn't see. We just walked around feeling the walls and said we'd take it. The man living in the apartment above us was an agent who just lost his photographer of ten years. He signed Raphael and is still his agent today. If I had not lost that apartment, we would not have met him.”

For Raphael, this launched his career into the upper echelons. He now travels for months at a time. Although often on set with up to 40 people, he manages to find his own space “I'm very spontaneous. I'll grab the model and take off. I like a girl very natural with almost no makeup and hair that looks like it's been on the beach all day. If I had three words for my work it would be raw, organic and romantic.” For Lisa-Marie, it was time to take a sabbatical and be with her son. Six years later she was ready to head back to work and chose to step behind the camera. This developed into a niche working exclusively with classical musicians. “Photographing classical musicians is all mine. I do the hair, I do the make-up, I do the retouching - it's my whole project from beginning to end.” Her style is romantic, classical and soft. There were a few mishaps in the beginning such as one of her early shoots with violinist Soovin Kim, “I wanted to shoot him up on this four foot rock, so I told him to give me his violin. I was holding my camera so I stuck it between my knees as I didn't have an assistant. He went pure white - the earth stood still. The violin was worth two million dollars.”

When Lancôme approached the couple, they were delighted. For five years Raphael has been creating mixed media artwork by building layers of photographs, painting and resin into stunning canvases. He decided to use the same concept in creating imagery for the Gold Fascination campaign. After the initial photographs were taken, they applied make-up onto the photographs with brushes, dabbing or mashing with their fingers and sprinkling. Then he would re-shoot the photograph to create new images in an organic process that is trademark Raphael. The finished work was used to create limited edition make-up boxes - unique pieces of art.

After 20 years in the industry, the Mazzuccos are still going strong. When asked advice for others in the industry Raphael offers, “If you want to be a photographer, you need to understand that all the photographs you take are your map, your quest. Just be true to yourself and act on what you feel. Grab everything great and be inspired by many different people.” Good advice.