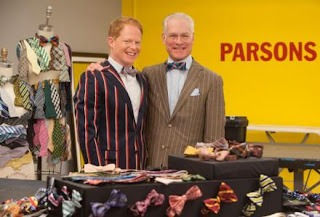 The show opened on a couple down moments. First was a flash forward to Sandros fighting and creating drama with several other designers backstage and then STORMING out of the building. Perhaps the pressure was getting to him. Unfortunate as there is something interesting to be said for his design aesthetic. We then move to 36 hours earlier and are given another downer. Jeremy's grandmother has died and because of being on the show, he will not be able to attend her funeral. Enough side drama. Let's move to this week's challenge.

When the designers entered the workroom they were surrounded by tons of bowties of all colours and patterns. Several immediately thought menswear. Tim Gunn then introduced a special guest - Jesse Tyler Ferguson of Modern Family who, with fiance Justin Mikita, founded Tie the Knot. This menswear-based charity and advocacy organization advocates for the civil rights of gay and lesbian Americans throughout the U.S. - especially the right to marry. Jesse was hilarious commenting, "I vomited bowties on you." Tim then tells them the bowties will serve as the point of departure for whatever they wanted to create. Most were relieved it wasn't a menswear challenge. They had to incorporate at least one, but no limit on how many. The bowtie couldn't just be tied on, it had to be evolved. They had 30 minutes to sketch, 30 minutes at Mood Fabrics with an estimated budget of $200 and one day.  Jesse was to be the guest judge this week.

I wish the show had time to include as least a brief encounter between Tim and each of the designers during his early critique so I could give you more on those that fell in the middle ground. We always get a lot of info on the top and the bottom, but sometimes those that fall in the middle early on are sleepers that gain momentum as they get more experience. It would be great to hear a little of their inspiration and Tim's feedback each week just in case they suddenly start to click on the show.

Bradon shared that this challenge was special for him because he had been with his partner over 18 years and would love to get married legally in the U.S. Tim first commented that he loved the short top made of ties pieced together with a hand stitch. How Bradon pulled off the jacket and shorts to go with it I do not know. The cool, but complicated top took most of his time. The shorts were made last minute and the day of the runway show he still had to make a jacket. The top really was the highlight of this outfit and probably the main reason for his win (well, maybe add in that the challenge inspired him to propose to his partner from the runway). Love the back so included an extra image! Comments included - I think this is fabulous, I love how you created the top just with bowties, I love the texture and am particularly impressed with your mix of fabrics, the colour and melange of textures are so fabulous, so cool, this is brave and it's fantastic.
Dom wanted to create an origami influenced neck detail with the ties. She chose all striped fabrics in reference to the equal sign as the organization was all about equality. Initially she was going to pipe around the ties, but Tim had her take a second look as he felt it made them look too heavy. He was right. The final look was much cleaner and lighter. Comments included - your model looks amazing again, it's a lot of stripes to play with and it all works, a show-stopper, fabulous, this is so adorable, I love the happiness, it's a celebration, I love it so much and great job. This easily could have won as well, so the judges really had to make a hard choice.
Kate created a look with a hunting party/equestrian inspiration. On the runway she changed it to a nod to traditional men's wedding attire. Tim seemed very positive overall with just some notes on the pant detailing. At fittings Kate admitted she was nervous about the pants because she's never really done one. WHAT? Every designer should know how to do a pant. Very few bowties were incorporated so she was lucky to be top 3 based. Comments included - clever cookie, a very sexy and modern look, I especially love the pants, the pants are SICK, I want this and a head-to-toe look.
Sandros commented continually he was going to ask,"What do you want from me?" if he didn't win. When Tim came to check progress, the conversation arose again. Tim finally told him to not make design decisions based on what he thought the judges wanted to see saying, "You need to be who you are!" Sandros requested feedback on the runway anyway, even though he was safe. Zac responded harshly, "It looks like someone went home with a man in an evening gown and came home with a tie attached...It looks like the walk of shame after an awards show. Great construction behind it...the taste and story not very flattering." Backstage Sandros had a fight with Helen that put her in tears and then we pick up the scene of him storming out. Added in are him flipping off and then striking the cameraman. Tim let the judges know what happened and that Sandros was currently missing. Heidi then annouced that Sandros had eliminated himself and due to his outburst, would not be allowed to return to the show - the rest are therefore safe.
Jeremy admitted he was feeling totally off his game because of the death of his grandmother. What he was working on was an updated tuxedo look with only a tie detail around the back of the neck. Tim cautioned him on the use of lace. A sign of what was to come was Jeremy's comment, "I'll at least be safe, hopefully!" The ties were used only as banners over the jacket which was not really incorporating them in the design. Comments included - you have a gorgeous girl and made her look madam, it doesn't look modern or fashion forward, beautifully made, but the overall effect is lacklustre, I have a problem with the fact you highlighted her belly button, looks like a 68 year old actress receiving her honours and she looks wonderful but very old. 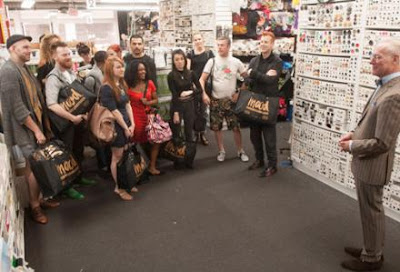 Miranda caught Tim's eye with her houndstooth short jacket, but he was concerned about the prim fussiness of the pink blouse worn underneath. While she changed the blouse, it ended up still not working, so in a last ditch effort to make it sexier, she cropped it. That might have worked if she had made it fitted, but the loose silhouette didn't work with the shorter length - something even she recognized when her model was on the runway. The only use of the bowtie was a bit of trim at the neck edge of the blouse. Comments included - I don't think the challenge was to hide the bowtie completely, I want to see it used in a clever way, looks very 80's and I don't think this is a cool 80's moment, the top is the killer here, making a jacket is not easy but I just wished you had focused on something a little more modern and this did not turn out well.
Sue noted the challenge for her was working with small bits of fabric. She also spent double the suggested budget at Moods. Tim was surprised to see she had two garments under construction, probably one of the reasons she spent twice the budget. The idea she ran with was a black dress with an exo-skeleton of ties. As her model went down the runway she commented her look was very avant garde and that probably not everyone would understand it, but she liked it. Comments included - what a mess, it is so crazy, I don't understand it, what was she thinking memorable instead of memorable in a good way, less is more, don't get so esoteric, octopussy, Sigourney Weaver in Alien, it's bizarre, very arts and crafts, coming out of the sea covered in kelp and I think it's a failure.
Alexander was extremely happy with his bowtie outfit and thought it was his best work yet. He felt he worked the bowties better than anyone else. Not my favourite. I said last week I didn't think he had a great critical eye when it comes to his own work and that stands true this week as well. Alexandria wanted to offer a clean, smart look like one would have if wearing a bowtie. I liked the silhouette, but I think the balance of colours falls a bit flat on the runway. More pop in the palette would have made a difference. The back view was definitely more eye-catching. Helen was thrown that Tim wasn't very positive about her initial design. Confidence gone, she left the workroom for a short break fighting back tears. On the runway, I found the blue bowtie strapping didn't blend with the rest of the design and was poorly constructed. Heidi commented that Helen was very lucky she had immunity this week as the dress was a MESS! Nina noted, "This was so bad that I'm wondering if last time you won because you had Kate as your partner. I would love to see something better next time." Helen felt it bullshit that they suggested her win last week was because of Kate.
Justin was happy with his design and how the ties are incorporated, but admitted it just didn't have the impact he was hoping for. This was definitely not one of my favourites and could have easily been in the bottom in my opinion, but I think Justin might be a sleeper. He seems to have a very realistic critical eye when it comes to his work on the runway that, IF (a big IF) he can capitalize on, will help him slowly gain momentum each challenge. Karen was offering, "A chic woman going out on the town with her boyfriend," and I think she fulfilled that mission. The black/white scheme worked well and the pop of red - shoes, bag and lips - were great accents. Ken was content with his edgy, sleek look and felt the ties were incorporated well, but was worried about the exposed zipper not laying flat. It earned him a safe slot in the middle.

New this week were comments on the website from a few of the other designers about who they felt should have been top and bottom. Most did not agree with the judges.

Bradon
TOP Sandro "Inner construction of the gown is great work for one day."
BOTTOM Miranda "Look has been done too many times."