on September 26, 2013
All runway images courtesy of Peter Jensen Photography 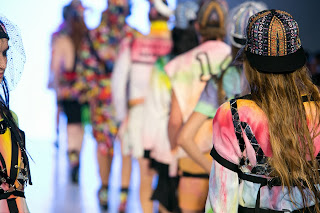 What a joy to have a designer show at Vancouver Fashion Week that I have followed for many years. This was my 4th season covering this talented artist from Korea and he again rocked the runway! Want to see a few photos from his previous runway shows at VFW?  Check out September 2012 and a retrospective showing four previous seasons called The Evolution of HaSangBeg.

One of the best moments of the whole week for me was the day before his show. This handsome young man in a long, tan trench coat comes up, says hi and asks if I will be there for his show the next day. If you know me, you know by the end of fashion week I'm so mushy brained I wouldn't recognize my own kids.  I say yes, of course, and then ask which show is his. When he says HaSangBeg, I'm actually speechless. I've only spoken to him once before and every time I see him he's dressed in anything but a tan trench coat.  My first order of business was to grab a photographer and get a picture of the moment, but he quickly escaped with a big smile on his face. This was his incognito wear and he didn't want it photographed.

The next day I came extra early so I would hopefully have a chance to connect with him and finally snap a picture of us together before he started gearing up for the show. By the time I have covered someone for five seasons, this has usually already happened. Not so with HaSangBeg. The crowd of admirers after a show is just too hard to navigate. Somehow I managed just the right moment. It was great to just relax, share a quick hug and let him walk me through the looks currently hanging enticingly on his rolling racks. This talented designer is still not all that into divulging a lot of personal information such as where he trained (although rumor has it some of this was covered in a TV interview after his show), but he is oh-so-friendly and down to earth - a truly nice person. Looking at his latest collection I was again, as always, in awe of his talent.

Every show he puts on is produced with perfectly balanced layers of simple and complex. I don't even know how to explain it other than to just dive in. Some of the silhouettes seen were actually very simple - beautifully proportioned but not elaborate in design. However, the fabrics were extremely complex. No the looks you saw weren't created from a purchased bolt of fabric. I am going to put the surprise information on the fabric later, so read on. Other looks were more complex in design or embellishment, but paired with a solid colour or quieter print fabric.

Another way HaSangBeg amped things up was with layering and detailing. Harnesses (some attached), intriguing metal triangles that were used both as sewn on embellishment and to create unique accessories such as an unusual metal bra top, matching baseball caps embellished with horns or chain and macrame'd fringe were all used to complete the looks. One great long coat had detachable white fringe attached with white straps at the elbows that took it out of the box. Cool design - unique twist. Another great styling note was the boots!  Totally street worthy, they were offered in all three digital prints. I definitely need a pair - hell with age appropriate!

The palette was COLOUR with a capital C - from bold primaries to bright watercolour pastels (yes pastels can be bright). While there were a few garments offered in black such as a dress, t-shirt, shorts, pants and skirt, they were used more as a stage on which to showcase the dramatic, colour palate.This S/S '14 collection was young, hip, edgy and desirable. Break it down into individual pieces and there was a range of options that could speak to the style demands of a diverse group of clients. In a conversation the next day, I told the designer I thought this collection could easily be a sell-out and I stand by that. As always, it's about reaching the right customer.

Now for the great fabric story. The light blue and dark striped fabric are his own prints. They were created by hand-beading two separate pieces of fabric (a four week process for each). Then quality images were taken of the finished fabric and scanned into the computer. These images were used to create the two striped textiles. For the lava lamp looking fabric in bright primary colours, he took six weeks to hook a rung with the design. Again, a quality image was taken, scanned in and used to create the digital print. If you looked close enough you could see the texture of the yarn visible in the print. WOW! Looking at these images I realize I didn't even get a chance to ask about the 3rd watercolour print.


What continues to take my breath away is that this designer brings a look to each new collection that stands apart from the previous ones.  Like fine wine, a fan will be able to tell you what season a garment is from. That's not to say there aren't elements that find their way into each collection, but the overall look is unique. Where does HaSangBeg go from here?  Home to participate in Seoul Fashion Week.  No doubt his show will be SRO and the cameras again will be flashing non-stop.