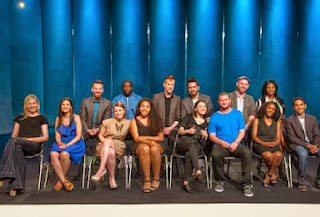 This week the designers waited in the backstage lounge to hear what the new day would hold. Tim Gunn came in with Rob Le Bras-Brown, the Senior VP of HP Worldwide Marketing and everyone sat up. It was the challenge they had all been waiting for since episode one.

Episode 11 would be the HP Intel Textile Design Challenge. The designers would be creating their own original print on the latest technology from Hewlett-Packard - the HP ENVY Rove. The inspiration for this challenge - a group of Next Generation innovators. They would not be the model or client, only the inspiration for the look. The print would be inspired by their muses, but the garment could be whatever they wanted it to be.

As the winner of the last challenge, Helen was allowed to select first and chose Ryan Keeley, an abstract artist, photographer and gallery owner who combines painting with new media and technology. The rest had to chose in an order dictated by the dreaded button bag - Bradon chose Nigel Sylvester, professional BMX rider, entrepreneur and youth mentor; Alexandria chose Ilana Greenberg, Creative Director at GD USA and a top graphic designer who uses her creativity to advocate social causes; Alexander chose Thiago Silva, executive pastry chef at Catch NY and named one of Zagat's 30 under 30!; Kate chose Maria Gonzalez, a 17-year-old who works with Girls Who Code (a nonprofit that teaches computer science skills to young women) and created an app called Say Something to help NYer's help homeless people;  Justin chose Miss USA 2012 Nana Meriweather who co-founded a non-profit in South Africa where her mother was born that focuses on education and health; and Dom chose Premal Sha, co-founder of Kiva which crowd funds loans for entrepreneurs world-wide.


The designers were given one hour to meet with their muses to hopefully find the inspiration they needed to rock the runway this week, and then one hour to create their design after this meeting. The winner and their Next Generation partner would receive technology from HP including the Split X2, a combined desktop and tablet that splits, and the new Rogue that leaves the desktop behind. After their interviews, some brought souvenirs to the workspace - Alexander, a cake that melted in the 90 degree heat and Helen, a picture created by her muse with her image in it. Then they are given 30 minutes to shop at Mood Fabrics for additional fabric and a suggested budget of $100 to be debited from their GoBank account. Guest judge this week was fashion designer Peter Som. Note - after the workshop critiques Tim commented everyone seemed to be over thinking it and he was going to be a worried dad all night. When Heidi said on the runway that one or more may be out, she followed through this time with a double elimination.