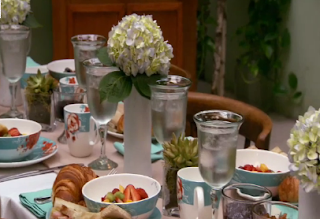 Heidi Klum strolls onto the runway this week and announces the designers deserve a morning off. They have a southern-style brunch waiting and are told to relax, unwind and have some fun. Everyone knows right away something is up. Brunch moves along at an easy, friendly pace until Tim Gunn walks in and says, "Good morning everyone!" Dead silence ensues. Love Alexandria's wit! She comments, "Game's up - brunch is over - time to work."

The purpose of the brunch was to have a lovely, civilized, relaxed time because those are the qualities of the woman they will be designing for - the modern Southern woman. More specifically, the Belk's customer.  Ken feels he has an advantage as he lives in the south and sees this woman every day. That turns out not to be the case. Special notes given the designers on the Southern woman include: she dresses vibrantly and expressively, is always fashionably put together, knows how to use accessories and loves colour and feminine details. The look can be day or evening and must be completed in one day. Designers are given 30 minutes to sketch and a budget of $200-$250. Then it's off to Mood Fabrics. The winning look will be sold in Belk Stores and on www.belk.com. Guest judges this week are Belk's Executive VP of Private Brands, John Thomas, and "Supermarket Superstar" host Stacy Keibler.


I didn't totally agree with the judges this week. Bradon is the winner hands down for me as well. His dress was risky, extremely well constructed and full of unusual detailing. I personally felt Kate's dress was unflattering. Heidi agreed with me - the other judges loved it. I would have instead included Justin's. It was totally top three for me. The bottom three gets harder now as the weaker designers have left. Seeing the garments close-up now becomes a real factor - something I cannot do. In a unusual twist this week, two designers end up winning - one from the bottom three. Surprise!


Dom wants to do something inspired by water. The dress she sketches is similar to the one on the left above except the bottom is a beautiful black/white print. As she has only been safe every week, she considers showing the judges something different, not include the print and go very minimal in design. A mistake as her original sketch had more interest and energy. Tim questions whether this is under designed (too basic). It looks better on the runway than in the image. The high split in particular is nice, but somehow those 2 colours just don't quite meld and it is too simple. Comments include - I love the coastal vibe, prom, it looks like a dress I can see in the mall, not fashion forward, maybe you scaled back a little too much, I hate the colour, it looks like hospital scrubs, I need to see what oomph you have as a designer and I'm very disappointed.

Ken designs a floor-length maxi dress with the idea that is can be dressed down for brunch or up for a dinner date. He originally wants a flowing silk print, but notices most of the designers are choosing prints, so changes to a solid colour. Tim loves the colour and feels he's on the right track. It looks okay on the runway, but perhaps a bit daring in the plunge at the side seams. Comments include - you chose a great colour, I'm not that interested in the dress, it's not a wow piece, a beautifully cut purple nightgown, very unflattering, a very safe design, pedestrian, heavy, a dress that blends in, fashion is about taking smart risks, I'm not excited by the dress, I've seen this before and a little bridesmaid-y (truth).

Jeremy sketches out several blazer shapes. Tim feels he's doing a great job trying to make the jacket modern, but encourages him to think outside the box on the dress too and not to be too matchy-matchy with accessories. Unfortunately he bangs the dress out two hours before the runway show so it's pretty simple. I do like the red pop of colour and can see many women wearing this look if the dress was a bit shorter, but the question is whether it is modern? Comments include - this does not look very modern, very madam, college fashion show, I'm not happy about the silhouette, it looks like a casino jacket, the first dress you learn how to sew, it doesn't seem hip, the length is a bit weird, nothing could have saved this jacket, I can't get past the print and this look just missed the mark.

The judges felt those that missed the mark did so because they did not understand who the customer was and sent the bottom three back into the workroom to create a 2nd garment IN JUST 60 MINUTES. They are allowed to have one designer help them and they can use any of the fabric left in the workroom. Insane to say the least. Two of the three did a better job the second time around.

I AM TOTALLY IN LOVE with Dom's 2nd dress - the photo does not do it justice. It moved beautifully on the runway and had a really interesting back. Top three for me if it had been in the first show. All the judges went crazy over it - Heidi said if it was in the store she would buy it. Zac Posen said it would have received top marks from him and that is was the best piece he had seen from her. In a surprising turn of events, her dressed was also chosen by Belk to go into production! Wow!

Ken's 2nd dress was given the nod of approval as well - it was now more modern and sexy with most judges happy overall. Heidi was hesitant as she felt it was a bit short and forced looking. So better, but not a home run.

Jeremy's dress did get the nod that it was a lot better, but compared to the others his was very simple. While the judges said Jeremy's second design is better than the first, I personally don't like how it looks on the model and think it looks very K-Mart. He was sent home.


Alexandria is fearful as she has to design for a woman she is unfamiliar with and struggles to find an appropriate design. Her idea - a nice dress. Oh-oh! She changes her design and fabrics several times.  Tim feels it's looking very Bohemian instead of Modern Southern - sort of Southern Navajo. After seeing all the trims Tim comments she's going crazy quilt and then says it's hideous and she might go home. He encourages her to go back to her original plaid which is what she used in the final look. When her look goes down the runway she knows it's not her best work and is happy to just be safe.

Helen decides her woman is going to a cotillion, but had no idea what that meant. She chose a bright yellow fabric for underneath, a floral sheer to go over and a more refined silhouette. When she describes it to Tim she uses words such as fresh, outdoors, champagne and dinner party. Another designer cattily commented - it's like the 60's threw up. Don't know about throwing up, but it is very 60's and old looking to me. The skirt is also way too tight to really walk comfortably. The model pulled it off, but if you tripped or bumped into someone at a party, you'd be toast. After she was declared safe, she noted offstage she was upset as she felt it was a winner. Sour grapes are never attractive.

Justin's sketch is a 2 piece garment. Tim's feedback is that the colour combination of Black/Orange is too Halloween. He likes the coral which he feels is very modern. Unfortunately Justin only has two yards so knows he has to think hard to make it work. He ends up creating this dress with only two pattern pieces showing a very technically proficient side of him I didn't know about. Wow! REALLY loved the way it moved on the runway, the interesting way it was constructed and the look from the back. This one was top three for me personally. If it was in another colour I would wear it myself.