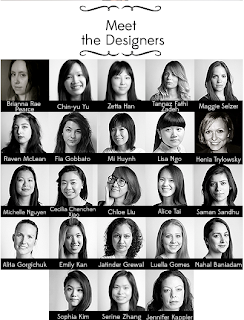 The very first fashion show I attended as a writer was Vancouver Community College's Fiat Mode graduation show in September 2007 - 6 years ago - and I haven't missed a show since. The month before that show I interviewed my first design student - also from this school.  So when I sat in the audience last night to see the new group of talented students from this school show their graduation collections, it felt like coming home.

There are a couple of things I liked about the VCC show. First, there was a great range of collections from ready-to-wear to out of the box conceptional. This season students found their inspiration in a wide range of really unique places such as earthquakes, Tron, vintage basketball shirts and white jellyfish! The other thing I loved was that each designer showed five complete looks - this is the only school to use this format. It gives the audience a better feel for a student's range and skill. When someone puts five great looks down the runway that are all sewn impeccably it really makes a statement. I do need to note that as there are only two looks shown, some of these designers had others that showed a much wider range. EX. -One student you see her casual looks, but she also offered high-end gowns.

Over the years the show has been produced in the Rocky Mountain Station, the Italian Cultural Centre and now in it's latest season - in the Vancouver Community College Broadway Campus. I have to admit, I liked the more intimate setting. It was in an open atrium on the 2nd floor with the portfolios in a side room on the floor below where you entered. Missed the portfolio room display until after the show when most were already gone.

The challenge? The runway was in an L-shaped layout. Enter Sarah Murray of Fashion Capsule. I have had the privilege of knowing this talented professional (PR, Sales Agent, Writer, Teacher, Runway Show Producer) for a long time and she is known for creative runway show ideas such as musical chairs or carrying in the set. Want to know more? Check out my article for Fame'd reprinted here called Much Much More.