on October 08, 2013
All images courtesy of Peter Jensen Photography 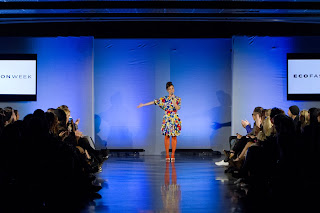 I know I am repeating myself, but I truly feel the Thrift Chic Challenge and 68 Pound Challenge shows are so in line with the principles of Eco Fashion Week - encouraging us in the audience to seriously consider keeping great clothing in circulation by shopping vintage, consignment, used and re-purposed. What better way to do this than by having four talented designers offer us their take on what the possibilities are? I wouldn't miss these shows for the world.

As this was the first night on the main runway, founder Myriam Laroche stepped out to welcome us, remind us that the fashion industry is in a very unhealthy place at this time and that EFW is all about starting a dialog. Next we met three of the sponsors who helped make this event possible: Vancouver Deputy Mayor Heather Deal, Philip Jung - the general manager of La Biosthetique - and Rachel Ricketts from the lawyer firm Heenan Blaikie.  Then it was on to the shows.

First up was the Thrift Chic Challenge presented by Value Village. Here the designers are given a budget of $500 to create an entire collection from garments to accessories. The catch? EVERYTHING has to be purchased from one of the local Value Village stores and very little altering can be done. I am always shocked in particular that they are able to find great shoes in just the right sizes. The three who took on the challenge this year were Kenneth Wyse, Dandilion Wind Opaine and Claire Bouvier. This mix excited me right from the first announcement as they all have totally different aesthetics. I knew I would be blown away before I ever took my seat. 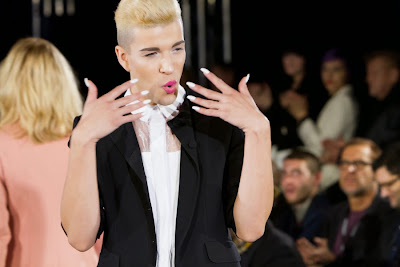 ...is a born and raised Vancouverite with an international style. He has always been drawn to the arts and interned with several clothing companies and graphic design firms. At 18, it was off to Milan to study photography at the IED (European Institute of Design). What followed was an intense immersion in the world of fashion, models, art and Milan Fashion Week. "Milan changed me. It allowed me to express myself in a way I never had before." Now back in Vancouver he is working as a freelance stylist, bringing that European flair as well as an androgynous approach to dressing men and women. His inspiration? Powerful women including his mother. "She was a power 90's woman, decked out in Jones new York suits, short platinum hair and chunky jewelry like nobodies business!"

Wyse's show - Kenneth Barbie - was inspired by a blend of Kenneth and Barbie, the ideology behind how he dresses himself and how he approaches styling. Showcased was a fun, poppy and ultra girlie blend of male and female fashion - "Ken and Barbie on the town." Male and female models were chosen who had faces with the specific doll-like features of big lips and perfect eyes and were finished off with identical make-up. The unique look showm on the runway was a perfect reflection of how this talented stylist views fashion. "It was something that developed in myself. I've always had a feeling for ultra femininity and I've really liked playing with it in my own life. This is homage to it." 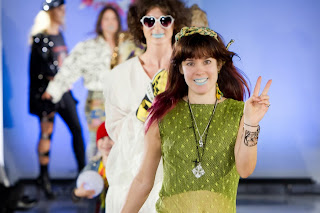 ...is an artist pure and simple who I have been fortunate to write on several times. She was born in a tent and raised in a cabin in northern B.C. that had no running water. Her parents taught her to appreciate nature and what it took to survive. Her strong musical skills led to performances all over the world. An innate creative eye led to work as art director on projects published in Dazed Magazine, Nylon, Playboy and Elle, as well as musical videos for herself and other acts. While in Los Angeles, she became intrigued by her work as a stylist and costume designer and decided to try her hand at fashion design. It was exciting to see this conceptual work on the runway in February 2012. Dandi has just finished work on her first fashion line, inspired by childhood wonderment and an unusual upbringing immersed in northern nature.

When approaching the Thrift Chic Challenge, she decided to change it up. "This is not what I would ever do for my own stuff. For this show I wanted to do something completely different - just a really fun and crazy." And that's what we saw. On the runway was a wild, unexpected, in-your-face mix of colour, prints and accessories that put a smile on everyone's face. Looks were not pre-planned, but allowed to develop organically on the models. Vintage, ethnic prints from Africa and India and even army camo were thrown together with a spontaneous abandon as only Dandilion Wind Opaine can do it. 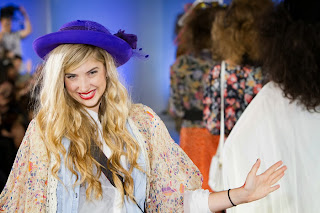 ...is from Kingston, Ontario. Born into a large family of ten, the budding artist channeled her creative energy into violin, acting, styling ad photography. Now she works as an English/Art teacher and is also the driving force behind The Claire Closet which empowers girls through eco fashion and art. Her personal style is an olio of hand-me-downs, thrift store treasures, DIY projects, donations left on her doorstep and garage sale gems. "All of my inspiration comes from the people in my life. I love people. I love their stories. It’s fascinating to see how a personality can illuminate one’s personal style."

When I managed to snag her for a few minutes back stage she shared that it was her first time to Vancouver and that she was loving the chance to meet new people and work collaboratively. Her collection originally had a whole different look, but as she pulled clothing it gravitated in a new direction. The final look is in her own words "Electro Swing" - a combination of vintage fashionista and Alice in Wonderland. I enjoyed the whimsy in clothing and styling, and felt overall her show featured the most cohesive collection. The addition of quirky eye frames and clothes hangers accenting the big hairdos offered great finishing touches.

Evan Ducharme and the 68 Pound Challenge Presented by Value Village 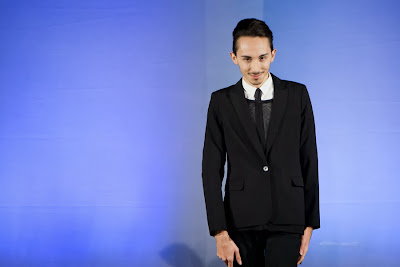 The 68 Pound Challenge is now in it's 3rd season. The first two featured the work of Kim Cathers of Kdon. She stepped back this year to let a new designer - Evan Ducharme - take it in his own unique direction, but was still there as mentor to guide him through the pressure cooker process. Ducharme is a transplant from Winnipeg and a graduate of the Visual College of Art and Design (VCAD) in Vancouver.  His graduate collection not only received wide-spread praise, it was the winner of the Fashion's Night Out design competition. Last season saw his F/W '13 collection titled "Belladonna" showcased on the runway at EFW to stellar reviews. His collections showcase "Eco" and "Repurposed" fabrics and are not mass produced. Everything is made to order or custom and produced by Ducharme or other specialized Vancouver artisans.

I unfortunately didn't manage to connect with him backstage beforehand, but the opening video gave some insight to the process. There he was - 6 weeks before showtime and at the ungodly hour of 5 a.m. - digging through the bags of unsold items destined for 3rd world countries searching for the right materials. In talking about the final collection, the designer wanted the garments to speak through silhouette and colour rather than through embellishment. Less is more. To keep things simple he chose a palette of white, gray and black. The theme was Halcyon - "Denoting a period of time in the past that was idyllically happy or peaceful." There was a definite warm summer breeze that blew through this runway show that started with bathing suits and continued on through a lovely flowing white gown and a man's suit. Elegant simplicity ruled the silhouettes whether male or female. Great proportions and lovely movement on the softer shapes drew the audience into the story. Kudos to this talented designer on a job well done!