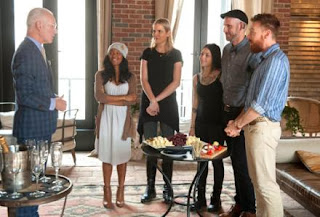 This week the judges have to decide which designer will show at Lincoln Center with Dom and Bradon - Alexandria, Helen or Justin. All five are given $9,000 and six weeks to create a ten look collection for spring. Wow - truly not much time and the least I think they have ever given. Another new angle - one look has to be created with unconventional materials. Absolutely no fabric!!! Of the designers, Alexandria is the one overcome with emotion - "Happy tears." I know she is reserved, but over the weeks she has earned a special place in my heart. Behind the wall she puts between herself and others is an intelligent woman and generous artist who mentors young girls.

Four weeks later, Tim Gunn is one the road. First he stops in Philadelphia to check on Dom who acknowledges the tremendous support her family has given her over the last few weeks. Her win would be their win. The inspiration for her collection came from relaxing in front of the TV and watching the movie Blade Runner, so she played around with the concept of Retrofuturism. She designed her original prints by creating watercolours. Tim's biggest contribution was to encourage her to print on knits as the colours were better and knits would work well with the silhouettes. Her unconventional look is a gown created from door mending braces. His worry for her is the lack of a single completed garment. Even the fabric is not printed yet - just proofed.

Next Tim heads off Los Angeles to pop in on Bradon. His inspiration came from growing up in northern New York state. The winters were long and hard, and he remembers getting excited when crocuses pushed up through the snow. Spring was a clash of nature here. What he tried to portray was the feeling of bright springtime vibrancy against glassy, snowy cool metallic colours. One interesting skirt looked like it was made from raffia, but was actually created from elastic. For his unconventional piece he used clothesline and painter's plastic (cut into a roll of tape about 3" wide and then knit). Tim is concerned about this look as everything else is muted and light, but this is very primary and heavy. Bradon is obviously devastated as he has five days of work into this. Tim ended by saying the collection was captivating and compelling over all, so just one look to fix really.

With only 11 days now until the designers are due back in New York, Tim starts to check on the three vying for that last spot. First stop is San Mateo to visit Alexandria. What this designer wants to put down the runway is a collection that is edgy, modern and strong. She has worked sewing, drawing, designing and moving forward every single day, and already has 30 individual pieces completed with unique detailing such as closures from fish hooks. Tim is happy so see so much work completed because it gives her lots of options. The collection is titled Neo-Nomadic Punk (a card tacked on the mannequin adds Urban Warrior). It's understated, current and very detailed. Tim feels it is very her and is impressed with all the construction details. For the unconventional challenge she included, unbeknownst to them, her camp kids by having them weave the pages of phone books. Tim is delighted he gets to visit Camp Couture. The program has grown from those first two kids to over 25 participants every week. They like making dolls that look like Project Runway designers in particular and had even created a Tim Doll.

With only nine days to go it was off to Union City to visit Helen. Her inspiration was clairvoyance - knowing the unknown. Very abstract. The way she made it more real was to take a photograph of her boyfriend's eye and use it in an abstract way to create an original print. Tim was surprised by the introduction of red. The collection was to have both bold and soft elements. For her unconventional challenge she chose to work with shower mats sprayed blue to match her original print. Tim's critique is that she needs to do something that speaks to innovation. Where is the excitement? What will keep it buoyant on the runway?

Last on the list was a stop in Raleigh to visit Justin. I had no idea Justin had a degree in

architecture. The collection is inspired by sound waves. He wants to tell the audience the story from before to after he received his cochlear implant. Before he was able to hear has a focus on pure - the middle the chaos and confusion of hearing after not being able to hear for 18 years which he hated - the 3rd was being at peace. 3D Printing was being used to create some of the accessories and accents. For his unconventional challenge he was trying to create a piece covered in test tubes. Tim's comment is the potential is there to blow everyone's socks off, but that it was not there yet. With only seven days left, I was nervous for him although Justin seemed relaxed.

One week later everyone was back in New York City at the Refinery Hotel to finalize who was showing in Mercedes-Benz Fashion Week and then - shortly thereafter - who this season's winner would be. The designers are extremely quiet as they hang their collections in the new work space with lots of discreet side glances to check out each other's work. When Tim comes in, it is with Raquel Rozas - Tide delivery brand manager - to introduce the Washable Fashion Campaign. The company is challenging the final designers to come up with a new garment for the show out of fabrics that are easy to care for at home. This will be one new look that can be popped in the washing machine. It is only for those who move forward, so first Alexandria, Helen and Justin will be presenting three looks to the judges.

Stress - thy name is judging panel. Tim takes a moment to review and question the collection decisions with each designer hoping to give them the best edge he can. He encourages them to be passionate about what they show regardless of the outcome. Of the three, he has the most reservations about Helen and the least with Justin.Turns out he is bang on. Before he leaves we see the classic, heart-felt Tim tears. He actually cares about each of them.

Okay - I have to admit Justin blew me away. This is the one designer who has never won a challenge and really didn't stand out until close to the end. Some designers excel when given outside challenges, others when given the freedom to follow their instincts. Obviously Justin is in that second group. His first look (a nod to his deaf years) is a play of white/black/shadow; the 2nd represents chaos (a nod to the confusion right after surgery) with 3D printing accessories and fabric painting; the 3rd his unconventional challenge (a nod to where he is now) - a gown from test tubes that looked like fringe or fur. Heidi's mouth dropped open when she saw it. I loved his use of the unique hairpieces for cohesion but Heidi and Zac totally hated them while Nina agreed with me. From start to finish, Justin nailed it and earned top honours. Judges comments include - I am so glad Tim Gunn used his save, very fashion forward, I love the story, the unconventional dress is a hit, beautiful sophisticated but the hair has to go, very proud, chic, all pretty wearable, be careful with the accessories and something very poetic about your designs.

Alexandria (A surprise IN) -

The designer's favourite look in this collection is the middle look and it got a smile from Zac as well. She feels the looks have strength and a nonchalant ease that is cool and modern - but admits she is concerned about a few of the proportions. I loved all three looks and I love this designer. So glad they chose to include a 4th designer and that it was her. Judges comments include - I don't know if it's enough of a new voice out there, I love it, fashion forward, really cool, so much detail, I want to have all of it (Heidi), a lux quality, detailing very professional, very modern, fun and cool, the most professional execution I have seen from you, I knew it was you, for New York Fashion Week these clothes are going to look very boring - are they show worthy clothes and something needs to happen to get it to have that magic runway moment. Heidi loves her work, but Zac and Nina just aren't fans. I agree with Heidi and am so glad she influenced the other judges. This style deserves the same attention as evening wear. Alexandria is, however, warned that the collection must be runway ready, not showroom ready.

Helen really seems taken with these looks, but I am not sure I am. The pieces are all great, but I'm not seeing the originality that won her several challenges. The eye print used to create the dress on the right doesn't pop as much as I thought it would and the cape is shaped in such a way that the model can't even lift her arms. Don't think you could take a sip of wine in this. The only truly different item is the acrylic belt on the red dress in the middle which I thought had a lot of potential, but Nina didn't like. Perhaps it was the challenges that drove her creativity. Judges comments include - I love this very minimal yet feminine silhouette your clothes have, black dress feels very modern, this print dress feels very tortured, can she move her arms in it, the red dress I don't understand why you gave it that belt, I am surprised it's not meticulous, you get the modern women, I commend you for taking big ideas - it's going to take a lifetime to achieve them, the last is like a concept that didn't come to fruition, I am so not happy with what you did today, feels contrived, a fit afterthought, execution is poor, these girls look so unhappy and not sexy and stuck.