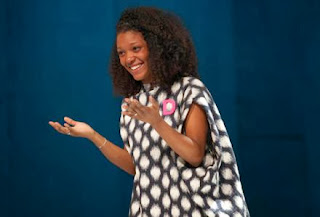 Here it is - the Finale to determine the winner. Whose collection will rock the runway at Mercedes Benz Fashion Week? Tim Gunn takes a moment to talk about what the next few days will hold. First on the list is creating another garment - the Tide Washable Challenge - so they head off to off to Mood Fabrics one last time. $250 and 45 minutes are allotted. How hard this must be as the look has to not only meet the challenge requirements, but be cohesive with their collection. AND it's only two days to their runway show. This garment will replace one of their original pieces as they will still only putting 10 looks down the runway.

Tim's in-studio critique is next. He offers great feedback for everyone involved and occasionally surprises the other designers by his take on a collection. I was most interested to hear what he had to say to Alexandria as Heidi and I loved her garments - Nina hated them - Zac was iffy. He was surprised by their reaction as well, so felt the message was she had to make the looks command more attention on the runway to keep the show from becoming monotonous. He encouraged her to get rid of all the basic t-shirts in particular that accompany many of her looks.Then he gives the truth about the pre-judge - it was a privilege to get that feedback and a disadvantage the others did not. It is, however, a two-edged sword. If the judges see the designer has made changes in the areas they pointed out, they will be happy. If it looks like their advice was ignored, it will be bad. She is obviously worried as some changes can not be made at this late date. She does decide to create at least one new top and change out a few others.


While most are still finishing their extra look, it's time for final model fittings. Bradon talks about the importance of which look goes on which model and decides not to remove the look that Tim questioned. Alexandria chooses to open with her unconventional challenge. She feels it will start the show with the pop the judges are looking for. Seeing the models loving the clothes rejuvenates her spirits. Justin is excited - and worried - about his 3D pieces. They are both unique and fragile. When they fall off one model during the fitting, he warned them all to walk very straight with no hip swinging. Dom spends extra time deciding which look goes on her muse model as that is the one that will stand next to her on the runway at the final critique.  Billy B is there again to help plan their makeup look for the runway.  Guest judge this week is actress and director Kerry Washington.

Backstage at Lincoln Center it is utter mayhem. One of Justin's models broke her ankle and the replacement has a smaller waist, but there is no time to adjust it. Bradon notes the model's keep bringing their food and coffee too close to his garments and continually asks them to move it all to a safer place. They don't listen and sure enough, one spills coffee down the front of his silk charmeuse gown less than 30 minutes before show time. He frantically blots it. Alexandria is such a perfectionist she obsesses constantly over every little detail. Only Dom seems to be gliding through it all with just the normal excitement level. All in all - the judges had a tough job and the scoring had to be extremely close. Every designer deserved to be here. As the judges take a closer final look they all admit it is anyone's game. As you listen to the critiques though, it becomes clear it is between Dom and Alexandria. How they decided I have no idea.

Retrofuturism (the future as it was viewed by artists and writers pre-1960's, retro Judy Jetson) - I have always loved Dom as I am a huge fan of colour and print. She created a strong collection that truly reflected who she was as a designer and the feminine looks included lots of low backs which are always appealing. There are a couple I didn't care for. The swimsuit was an odd note in the collection and made the model look blocky through the torso. The shiny silver dress looked more like a nightgown and was hard to walk in. A different fabric, or perhaps in black, might have worked better. Also, except for the swimsuit, the line was mostly dresses which in the past has been a negative as the judges have expressed a desire to see range. Dom was a close second for me, but based on her work all season - her win was well-earned. Comments included - extremely entertaining show, you told the story, a few problems, I would have started it with the jumpsuit, impressed you did the prints, the theme is challenging and for the most part you pulled it off, the bathing suit was the weak outfit - I wasn't impressed by the fit, you rocked the prints and your unconventional challenge was a stunning dress.

Alexandria (2nd, but my choice for winner hands down!) -

Neo-Nomadic Punk (a strong warrior like girl) - Alexandria took it for me. Her looks were young, hip, edgy and there were many I would love to have in my closet. She included her young students (unbeknownst to them) in the conventional challenge by having them weave newspaper. In the last group meeting with Tim, she was the one who expressed her thanks for this opportunity. She even lent Dom a zipper so she could finish her collection. She is a perfectionist who takes it all so very seriously. Love her and would have given her the win if I could have. Opening with the dress from newspapers was perfect. It was shocking and the layers on the skirt created a constant wave of movement as the model walked. Tim commented backstage that he could see Heidi in every one of these and he was right. This was the most modern of all the collections and oh so wearable. Wonder if she'll offer an online store? Comments included - young hip and now, I love your collection, I love that you started with a big old bang (unconventional material), really successful runway show, spice and attitude but yet vulnerable, an eye for quality, very sell-able, there is a dialog, soft chic and feminine, styled well, editorial, something effortless about your clothes, like that it's a lot of separates and exciting.

Sound Waves (journey before, during and after his Cochlear Implant) - The fact that Justin was here was amazing. He didn't really come into his own on the show until after Tim's save and was the only designer in the finale that hadn't won a challenge. During pre-judge, he picked his garments well and I thought he might take the win with his original accessories, fabulous unconventional challenge piece and great story. The very stark palette throughout was perhaps a mistake - mostly white on a white runway with a white backdrop. The design/construction elements were strong and interesting. He also offered a full range of looks from casual separates to dresses. On the negative side, a few of the pant crotches didn't lay quite right and the show needed something to give it a bit more pop with the stark palette. Comments include - beautiful collection, the shapes have a balance, 3D printing is excellent, liked the sheer fabrics toward the end, loved the sound waves dress, very polished, loved the accessories, very cohesive, liked the fact I saw many different shapes, a gentle architecture, modern and I wish I had seen 2 more wow looks.

Crocus Flower Coming Up Through A Snowbank - In my heart of hearts, I thought Bradon went into the finale definitely at the front of the pack. He had amazed me on so many challenges during the course of the show. I was utterly disappointed that I get the same feel when viewing his collection. There were individual pieces I loved - such as the elastic skirt that looks like rafia) and others I didn't like at all. The look that jarred for me was for the gold jacket with the dark floral pants. When you stepped back and looked at all looks together, I'm not sure it felt as cohesive as some of the other collections - a lot of ideas that didn't quite tie tightly together. He did space them well in terms of flow. I personally was not that fond of the unconventional materials dress, but it might need to be seen in person as it was one of the judges favourites. Comments include - loved your inspiration, (The judges all disagreed on the first look), your hand is expressive and abstract, loved the unconventional materials dress, I have admired your laser focus so it was a big surprise to see it not focused (Nina and I agree here), it's disjointed - too many things going on and if they don't know you they won't understand the story so should have been cohesive.