on June 03, 2014
By Guest Blogger Katharine Rene - A sponsored vegan athlete with FemSport Athletics, and a promoter of healthy living & true happiness. Her motto - "Be Natural, Be YOU"! Check out her website at www.KatharineRene.com and follow her on twitter at @KatharineRene 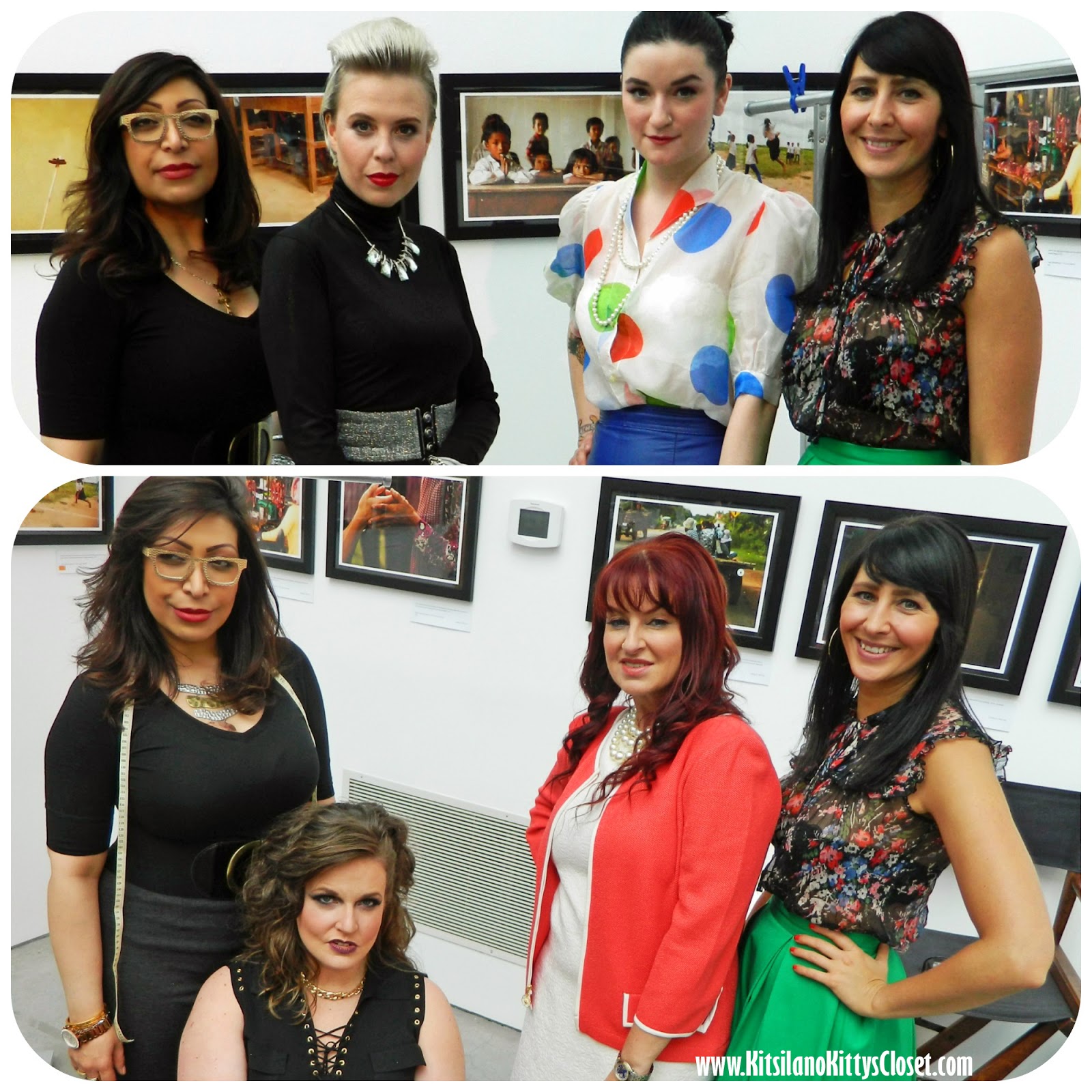 This past weekend, Helen Siwak of Kitsilano Kitty’s Closet hosted Sugar vs. Spice - A Styling Showdown & Luxury Shopping Party at the unambiguous Waterfall Building in Vancouver. I found the building not by address, but by the rows of rain that fell down inviting me to the tucked away event, like curtains to a stage. I knew I was in for a treat! From afar, I could see the hustle and bustle through the opulent glass walls; white chairs, make up artists, and designers who picked colourful spring clothing off the racks while others ate and mingled. I checked that my nude heels were clean, adjusted my faded ripped jeans, and clasped my transparent pink blouse with just a single button--afterall a fashion event is a fashion event even for a writer!

After checking in with the host, I was immediately shown around by a very friendly woman named Veronica from Devil May Wear (locally made clothing with an eco-friendly edge). Devil May Wear had donated a rather large gift basket to this event and anyone, including me, received a complimentary raffle ticket into the draw. As it goes in the fashion world, everybody knows everybody so I was pleased to make the rounds right away! I met Jihan a busy curve model for Wilhelmina Vancouver. She and I excitedly spoke about the ideology around a person’s size or weight. “Honor your curves” she likes to say. Just then, a woman who obviously knew Jihan bounced into our conversation with strikingly buzzed hair! Turns out this confident blonde bombshell Angela Krewenchuk is Editor-in-Chief of Fashion Anthropoligist, a sister company of Retail Insider (Canada’s #1 source for fashion news reporting). She had daringly buzzed off her shoulder length hair and had a makeover of her own. 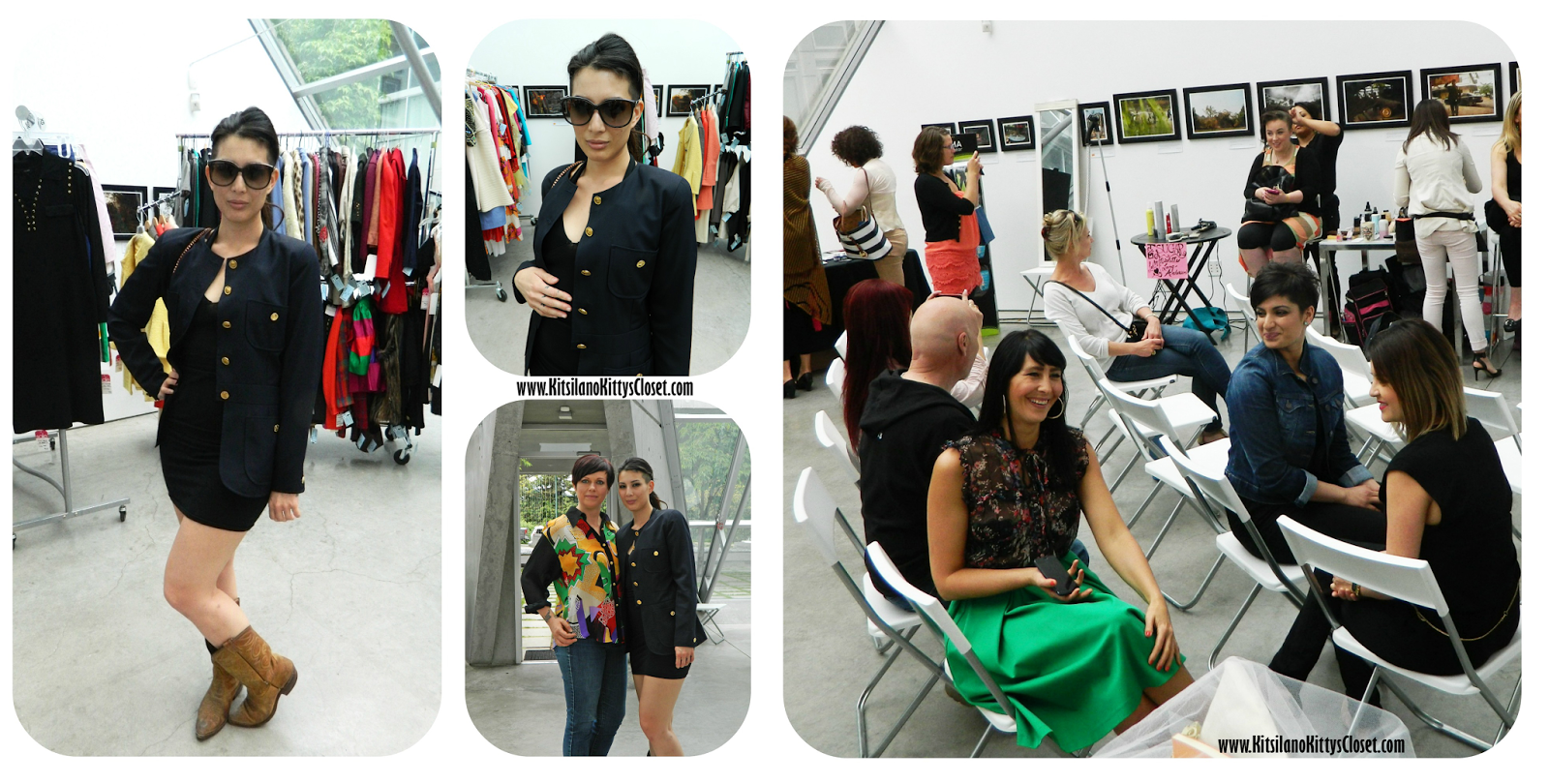 This event had two teams - Sugar and Spice - which were competing with head-to-toe makeovers, while the donations for their services went to charity. Team Sugar was lead by Personal Stylist, Nicolette Lang-Anderson from London (and originally South Africa!). I met her near the fashion racks when she suddenly pulled a lavender J. Crew dress for me to try on. From her bold, dark bangs, see-through yet innocent black blouse (wink!), piercing emerald skirt, all the way down to her pastel red slingbacks, she was a sight to reckon with! Her team was made up of hair and makeup by The Makeup Squad. Carrie Cheng applied make-up while Terra French was performing hair services. This sweet-as-sugar team gave all their donations to The Osteogenesis Imperfecta Foundation (a charity that responds to over six thousand “brittle bone disease” inquiries per year). 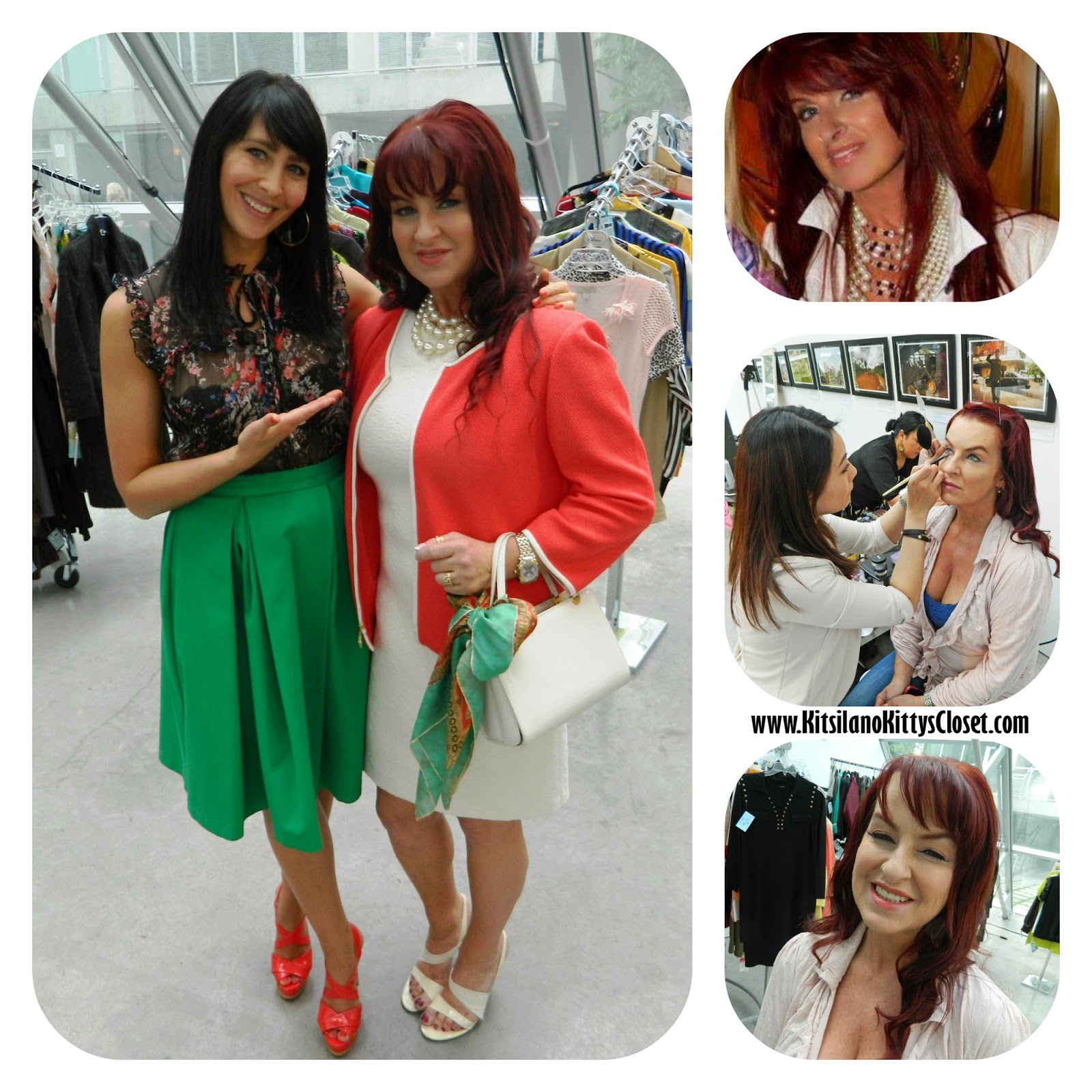 Modelling for Team Sugar was red-head Shannon Thompson, a private investigator who, when she’s not on a job, likes to be noticed! Away (for the moment) with her ripped jean jacket and bejeweled high heels! They wound up curling her edgy straight hair into soft curls, dressing her in a sophisticated, high-neck, Elie Tahari white shift dress with pearls, and a crisp, red St. John jacket. Accessories were clean-cut: a boxy white hand purse with a green sash tied to the strap and thick, white Christian Dior heels exposing her feet and toes between straps. She wore a bit more blush and a lighter lip, which definitely softened her look!

Team Sugar’s second model was fashion photographer, Paige-Sierra who is seldom found out of her signature high heels. Stylist, Nicolette, plucked her right out of her white/ wooden pumps and into much shorter Liz Claiborne 1980s kitten heels. Her longsleeved, top and black short shorts disappeared as Nicolette transformed her into a gorgeous doll wearing a deep blue leather pencil skirt and a vintage Ted Lapidus silk polka dot blouse. Her bun and deep red lip were fitting as her look was polished with a long double string of pearls and a simple, white purse. 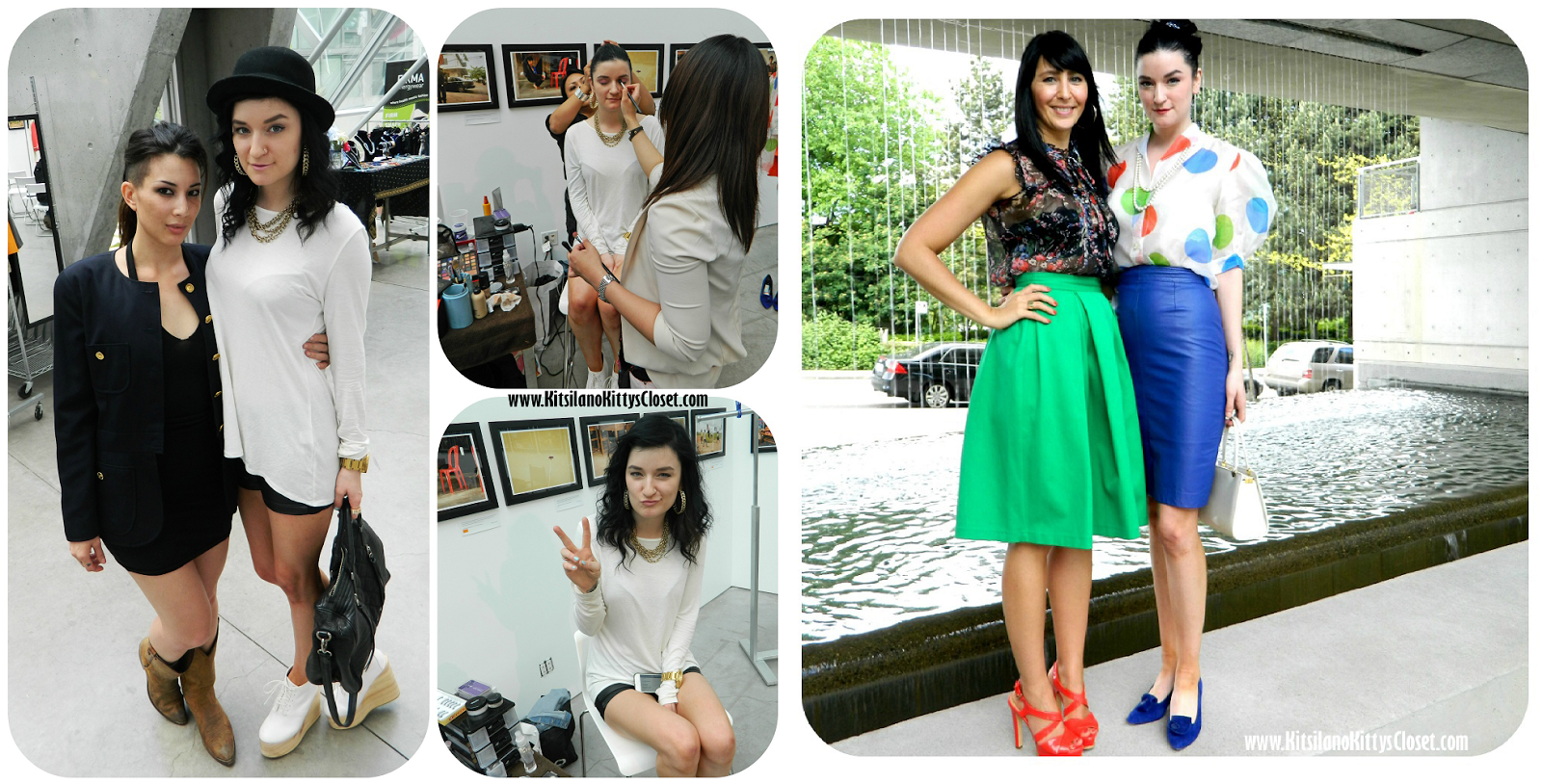 Meanwhile, Team Spice was lead by Fashion Stylist and Creative Director, Style by Dona. For fifteen years Donna has been romancing with fashions of far-off cultures around the globe! Now based out of Vancouver she plays a lot in the media, dressing the celebrities of television, music videos, and more. I noticed a charming flare to this fast paced social butterfly who’s motto is “More is More”. “Clearly!” she laughed as she pointed to her excess jewelery upon each of her wrists. Her team had hair and makeup experts: Tianna Tran, Aura Reed & Neet Ajula, Crystal Martinez & Terry-Lynn. Their charity of choice was one passionate and close to their hearts, A Wish To Wed. Make Up Artist, Tianna Tran co-founded A Wish to Wed to enable terminally ill patients the opportunity to receive matrimonial services and marry their beloved before it is too late. For beautiful souls who’s time is limited, Tianna gives her’s. Team Spice’s first makeover was on a man who wound up dressed like a diva and surrounded by a small filming crew and camera. A whisper in my ear told me that he was Josh Rimer, a YouTube personality and host of The Sassy Scoop (with over seven million views), as well as being a Canadian comedian. I would have never recognised him from his original button up shirt and black pants! After his drastic transformation, Josh strutted for the cameras in a little black shift dress (Comrags), a sheer yellow blouse clasped together with a metallic gold belt. His Tahari black patent heels were high and polished matching his dress while his golden turban matched his chunk jewelry. With his rosy cheeks and racey blue eyeliner, Rimer without a doubt put the fab into fab-u-lous! 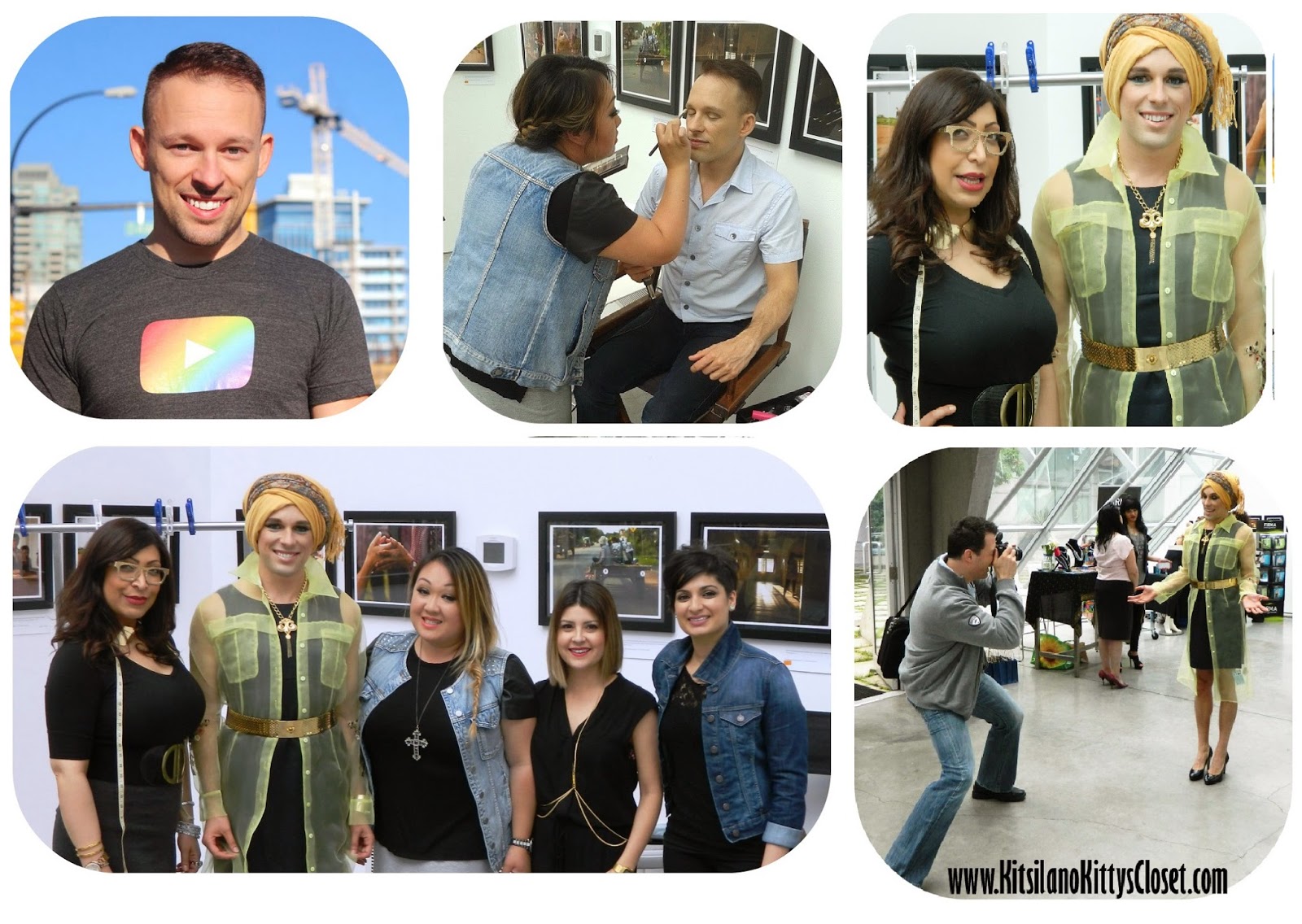 The second Spicy model was formerly conservative Kerry M. Gibson (President of EcoCentury Technologies Inc.--a small clean tech company) and coordinator of Elevate and Celebrate. She started by wearing a feminine blue wrap dress with soft wavy hair, neutral makeup, and a blue beaded necklace. After being applied with deep crimson lipstick, metallic purple cat eyes, deep liner, and a hairstyle that went as wild as a beach babe at a rock concert, she was more than willing to complete the outfit! Her pretty blue pearls morphed into a golden chain choker while her flower petal dress changed into a vintage, black Escada dress. Details of the dress included grommet studded shoulders and an Ian Astbury lace-up collar. It must've been that pink clutch and fishnet stockings that made her sneer like a naughty girl for the cameras once the final look was revealed! 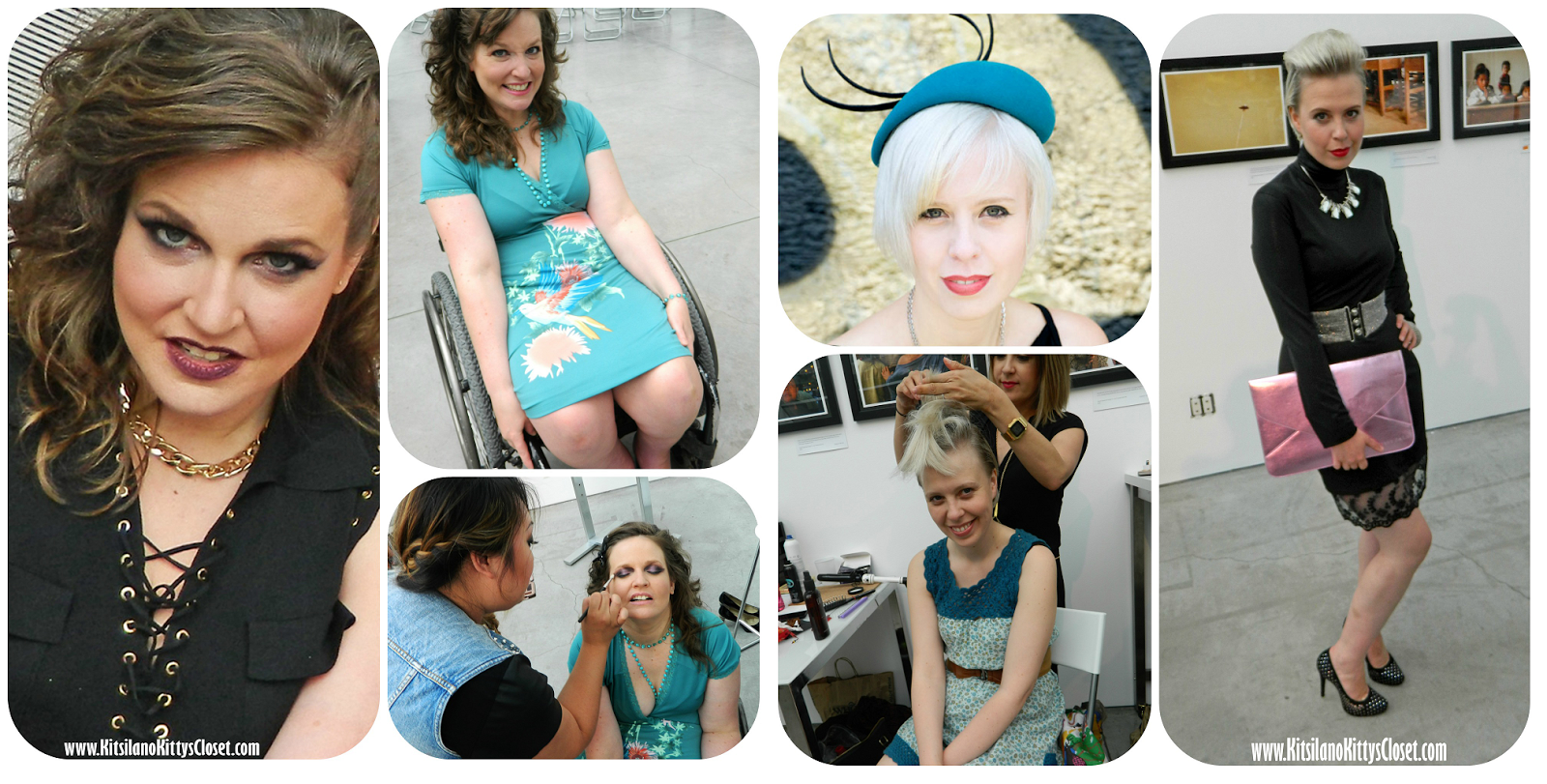 Last of the models was Dominique Hanke (designer at Hive Mind Millinery, stylist, and mother to two). She arrived in a safe country style floral dress pulled together with a brown belt. Miss Dona styled her in a Norma Kamali black dress, long sleeves with a seductive lace border above her knees. All cinched together with a thick metallic silver belt, a chunk diamond necklace, and a massive metallic pink clutch. Once she slipped into her Schutz studded heels, her makeover was officially sassy! The lacy collar and sweet smile quickly transformed into a bold pursed lip and and over-exaggerated hair bob! officially sassy! Having enjoyed watching and applauding the fun makeovers, I felt quite hungry. It was a sunny day and the sun was beaming into the glass so I mosied over to a table with refreshments and food, hoping there’d be some vegan options. Sure enough, Vit Vit Vegan had provided their vegan gourmet food for the occasion, complete with kale and pumpkin seed falafels alongside some raw chocolate balls...I had seconds of each! The fun continued as I strolled around observing the other sponsors of this event. I couldn't help but notice exquisite photographs hung on the walls. I later found out that these photographs were taken in Cambodia and Ethiopia as part of Art Zaratsyan’s self directed documentary project about humanitarian work of HOPE International Development Agency in developing countries. His images are bold in colour while they capture the hope and emotion in every frame. 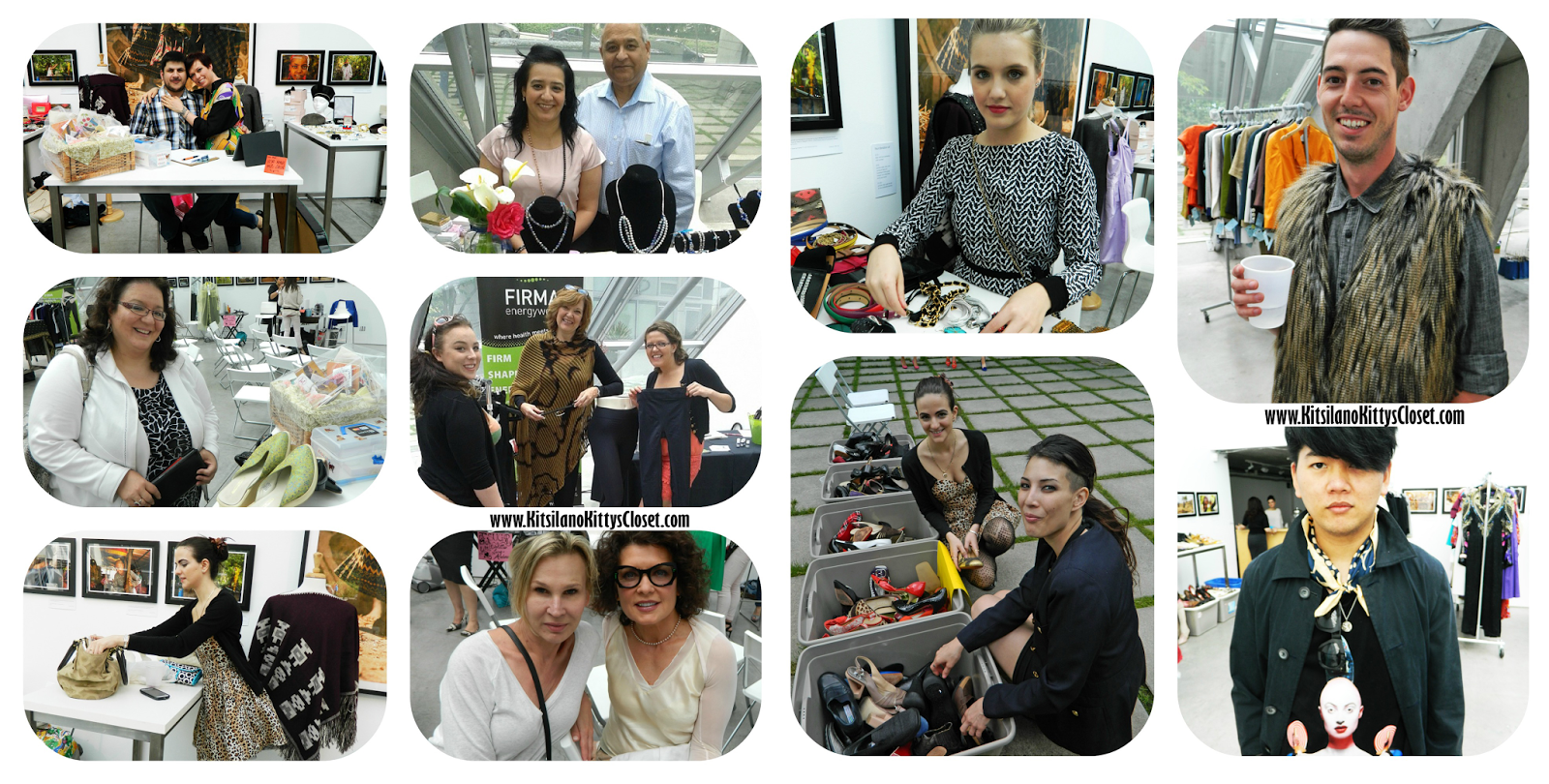 I continued around the room when my eye caught a table full of mala beads, which of course I was drawn to! I spoke to Fatima Sumar, the Principal Designer of Fantabulous DeZigns, and tried on a few of these crystals used by spiritualists to promote prayer, and balance. The next table I meandered to was FIRMAenergywear, a clothing line that uses active biocrystals to enhance medical benefits in a natural way. Another sponsor to the Sugar vs. Spice event was Modern Working Woman, a digital business and lifestyle magazine for today’s entrepreneurial woman. How appropriate for them to get involved in Helen Siwak of Kitsilano Kitty Closet’s event.

The designer clothing and donations of footwear by host, Kitsiilano Kitty Closet, was off the rack! I truly enjoyed watching the palpable talent in makeovers and meeting the interesting Vancouver fashionistas try on her luxurious clothing! Fashion brings out a mood, whether its a woman shooting a sexy sneer at the camera or having a gay man curtsy and giggle! It changes things, the way people perceive an experience, or approach a situation, and best of all, fashion is timeless.
Christian Dior Comrags Escada events Helen Siwak Katharine Rene Liz Claiborne Nicolette Lang Andersen Norma Kamali St. John Style by Donna Tahari Ted Lapidus The Sassy Scoop Vit Vit Vegan