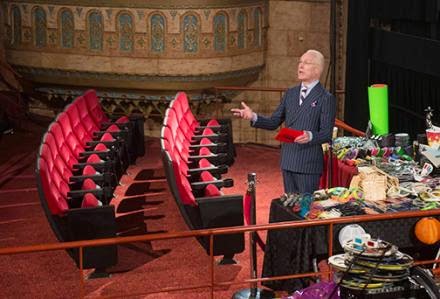 The designers wake up in their Gotham West Apartment in New York City to find a movie theatre style carton of popcorn on their kitchen counters with a note sticking out.

Good morning designers - we are sending you out for a little morning matinee. We have arranged a private screening for you at the Village East Cinema [in Manhattan]. Hugs and kisses Heidi and Tim.

Once ensconced in cinema seats, a movie trailer starts off featuring fashion clips and ends with Tim addressing the designers to give them this week's challenge. There were a few groans. It is both an unconventional challenge AND a team challenge. In the past many designers really looked forward to the unconventional challenge, but from the audience's response I don't think the group as a whole is as excited this season. On top of that, a team challenge is never a welcome event. Let's face it, a bad team pairing can send you quickly to the bottom. 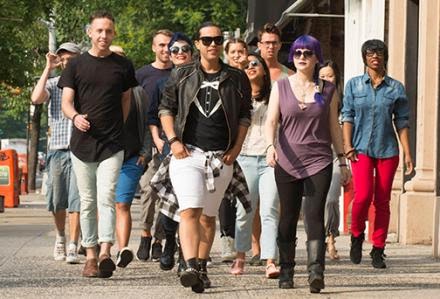 The materials this week are an array of movie and movie experience items found in the theatre such as camera and lighting department materials, the art department props, costume and wardrobe department materials and even concession items. Tim loves this challenge because it's about fashion and film. Then with a smile he shares, "I have another twist. You are each sitting in groups of three, so the designers you are sitting with are your team mates."  There is a mixed reactions as many are not happy. The team with probably the least cohesive aesthetics are Hernan, Carrie and Sandya. How they will find a common ground is on everyone's mind. 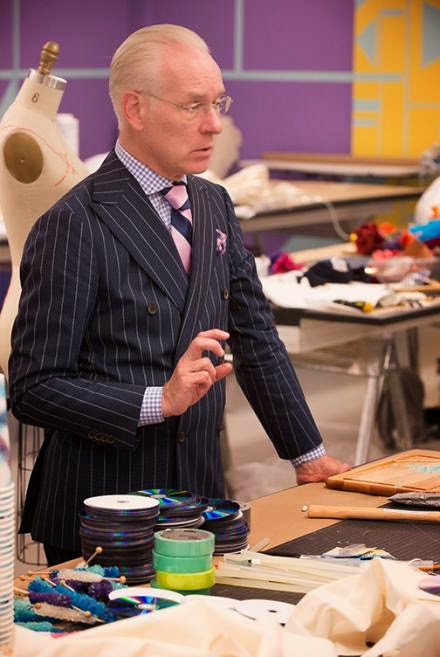 Each team has to create 3 cohesive unconventional looks. They have 15 minutes to assemble as much material as they want, but can only leave the theatre with what they can carry. It is a one day challenge. Everyone goes crazy as they wildly grab all they can.  Tim stops to ask if they're talking with their teammates. Really? When would they have time to do that and still have a chance to grab something good.  Off it they go to the workroom to begin designing.

Tim pops into the studio to give them a little more feedback. There will be one top team with the winner being chosen from this trio - and one bottom team with the loser being chosen from this trio. There is no team leader. Each is responsible for the work of the team. However, all are told not to sit in the back seat and let the others drive. He comments that Sandhya is lucky she has immunity this challenge and that really does turn out to be prophetic. Judges this week include Heidi Klum, Zac Posen, Nina Garcia and fashion blogger Garance Doré. 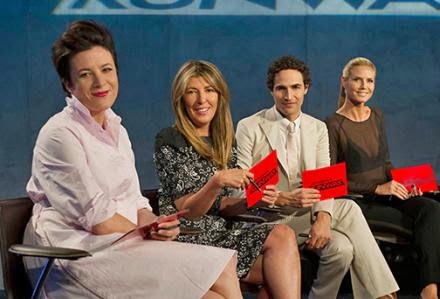 The green team was singled out on the runway before top and bottom teams were mentioned.  The judges liked Fade and Sean's designs, but did not like Angela's. Heidi added if Angela's had been as strong the others, her team might have been the top team this challenge. Angela who is fairly timid pushed to do something a little different from her team mates. I can't decide if her speaking up was in response to Tim's advice to make your voice heard, or if it was in response to her obvious lack of confidence.  You have to have confidence in your designs to push yourself to new places. In the end - it didn't matter as the judges did not like her work and told her so.

This team decided to chose green/black as the palette and go in a Sci-Fi, futuristic direction. Sleek, structured, nothing drape-y. They are all relieved that they are feeling the same vibe. Amanda reminds them to be careful about using material that looks too close to fabric sharing, "The judges love it when you make your own fabric."
Zac - This is great. You're used text and fonts - something that immediately says movie kiosk. You've taken it to a new place. And you've used transparency in a really interesting way. You did something really cool. I'm going to expect really big things from you now. You can tell you guys vibed nicely together.
Heidi - You collection felt like the most original. It was cohesive, we have 3 completely different dresses, but they look like they belong in the same fashion show.  It's really, really special. My favourite is the middle one (note - the one on the left above), it's so unusual. But also the other two dresses are stunning too.  You did a fantastic job.
Nina - The most exciting part of this is the colour because right there you notice them. What I also appreciate is you gave me 3 different shapes. You have an A-line, you have a ?? and then there's this body con silhouette. I could see Heidi wearing that. It looked like they're together, but they're very different.
Garance - I think it was very stunning when the 2nd dress (on left above) started walking on the runway because the letters float. I thought it was very smart because you really created an effect. People would be like - Whoa, what is that? The green really takes the collection all together. I still can't believe you did all that in one day.

While Carrie and Henan try to find some common ground at the start, Sandhya suggests they just do their own thing and then find common ground to bring them together. A bad choice and unfortunately made by the one designer who is safe. After Tim's review - Hernan gets a bit too pushy, Sandhya agrees to try to make something cohesive, but they go too far and the judges feel all the looks are the same - they lack that individual touch.
Heidi - At no point did no one think they all look the same? They look like 3 identical dresses. To me they look like 3 girls out of a music video. It doesn't look like a fashion show. For us now what we have to see is what is the worst one here, taking yours out Sandya because you're not in the running anymore. I feel yours on the right Hernan, at least it's a but more fashion with the piece around the neck - the bustier top even though it doesn't fit that great. What I love about this challenge is the designers manipulate the material. You guys just put the film roll on it.
Zac - This doesn't look complex, the shapes are a mess. The pieces are rough. No more excuses. We're looking at what we have in front of us.  It looks like the editing floor.
Nina - Sandhya, you're very lucky you are immune because yours is the worst out of all 3. It's awful. It looks sloppy. It looks ugly. It just looks bad and it brings your other 2 down. I'm angry because I think we do expect a lot from you and you won the last episode.
Garance - I think it was way too literal. Why try to go glamorous with such a material that doesn't move with the body, it doesn't work together.  I think that was one of the mistakes.

Obviously there are no judges comments to add to these, so the pictures will have to speak for themselves. I have added just a small note from their time in the studio when they discussed direction.

The green team decided to go with high fashion, avant garde looks and even consider taking the metal film frames apart to make headpieces. They seem pretty connected and relaxed.

The purple team chose to mesh their styles by creating a set of sexy cocktail dresses. The colour palette was to focus on blue.