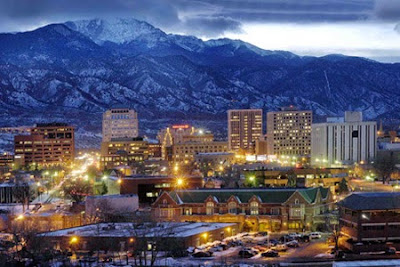 It had been 3-1/2 longs years since I visited my oldest brother and his family in Colorado Springs, Colorado. The last time I was down was to attend the high school graduation ceremony for his oldest child. The weather was warm and mostly sunny.  Every afternoon a thunderstorm would quickly roll through, but otherwise it was warm and beautiful.  Not once did we have to change our plans.

Here I was on the plane again with my oldest son in tow, heading down for the graduation ceremony of his youngest child, fully expecting a similar experience.  That belief was shattered while still in transit from Denver as I spoke with the locals returning home. They were having an unusually rainy period that had lasted over a month and all were going crazy. Sure enough - we arrived to see rain and it continued through that first day. The second day was grad and there were occasional moments of respite, but gray clouds and sporadic rain were still the order of the day.

Day three was set aside for sightseeing as my oldest son had never visited Colorado Springs before. The sun would pop out for a moment and then the rain would hit - back and forth. All of a sudden the skies cleared and we felt it was now or never. My brother quickly popped us in the car and off we went on a quick 2-3 hour micro tour.. From that moment on it became a weather gong show with moments of touristing tucked in. 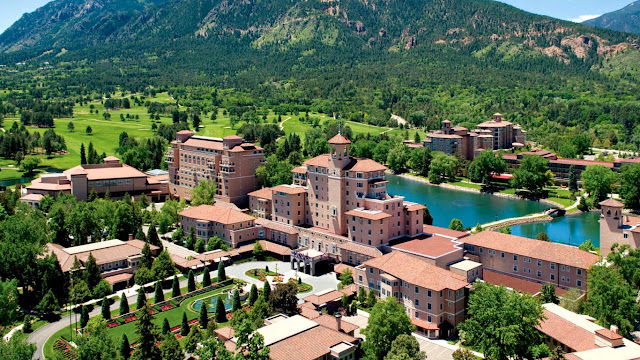 The saying in Colorado Spring is, if you don't like the weather just wait five minutes. As we entered the freeway, the clouds returned and the rain pounded down so hard we couldn't see the lines in the road. Undeterred, we continued on to the five star Broadmoor Resort and Hotel. Fortunately, as we arrived the rain paused, allowing us to enjoy exploring the grounds and hotel. 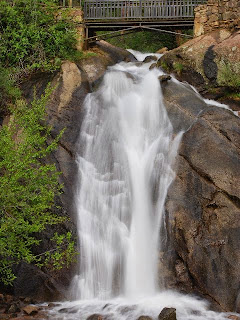 Construction on this beautiful resort began in 1918. The hotel is a member of Historic Hotels of America of the National Trust for Historic Preservation. Its visitors have included heads of state, celebrities, professional sports stars, and businessmen. The buildings surround a beautiful small lake that includes a swimming area, paddle boats and circle walkway.  As I walked inside I was struck by the very luxurious European look of the interior. Even the ceilings were decorated with either paintings or ornate textural elements. Service was top rate. Even though we were just tourists we were greeted, spoken with and offered the use of the umbrellas kept in a stand by each door.

Back to the car and on to our next destination - Helen Hunt Falls.  It was the journey, not the destination, that made this memorable. Access to this falls is up a narrow, winding two lane road full of potholes. The skies opened and heavy rains ensued. Water filled the potholes making them invisible, so we were constantly hitting them.  It seemed like every time we turned another blind corner there was a large truck coming the other way. When we finally made it to the falls, it was raining so hard that we decided not to venture out and were limited to what we could see from the car. Still a beautiful view. For anyone who comes on a sunny day, there is a nice trail to take your further up the waterway.

After a brief look, we did a u-turn and had just started back down the hill when the next weather pattern hit - HAIL! So the rain was pounding, hail was bouncing off our car and we were hitting hidden potholes right, left and center. I could only feel grateful that I was in the back seat with a limited view. By the time we reached the bottom the weather had changed back to light rain.

Next we drove through Old Colorado City on our way to the Garden of the Gods.  It was an area I had never seen before full of smaller historic housing and interesting tourist shopping areas.  If the weather was nicer we would have stopped for a stroll, but looking at those walking around - clothing drenched and hair dripping - led us to just enjoy the view from the car as we drove through.

We were close to giving up on our last stop, but pressed on as I truly wanted my son to see this wonderful work of nature.  As we neared the Garden of the Gods - in true Colorado Springs fashion - the clouds vanished in the blink of an eye and we were driving in beautiful sunshine with intense blue skies.  After all the rain, the view sparkled as the air was so clean. 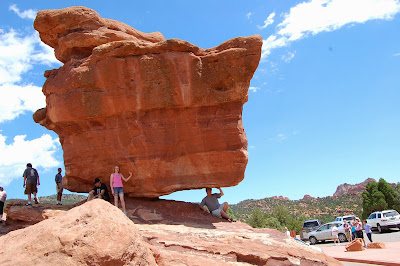 I always feel like the Garden of the Gods looks like an alien landscape. Surely they must film here. Giant slabs of red rock thrust up out of the earth at strange angles. As you approach it looks like just a few isolated rocks, but as you drive through it just keeps getting bigger and more impressive.

There is one tourist spot everyone stops at called The Balancing Rock. This large rock only has a very small attachment at the bottom to the rock beneath, yet tourists not only stop to photograph it, but climb on it to take pictures.  I can only assume the park regularly checks it's stability.  Even driving by it made me hold my breath.  Here and at a few other viewpoints we popped out of the car to stretch and enjoy the view. At the edge of the park there is a fabulous store you just have to stop in.  While it has a large clothing section as well as the standard tourist items like coffee mugs - they also offer many other unique items. One sections has a wide selection of crazy hot sauces as well as things like spicy Habanero microwave popcorn.  There is also fudge, baking mixes, jewelry and home decor.

While returning to my brother's house, the weather slowly turned back to gray. I could only think back over the last 3 hours and the very schizophrenic weather we experienced. I was glad there was only two places we couldn't get out of the car. However, as I said before - if you don't like the weather, wait five minutes. Don't let this article put you off visiting Colorado Springs. It's a beautiful area with lots to do and the weather usually includes tons of sun with just a late afternoon shower that blows through quickly.

I would go back again in a minute, especially if I could work in a few days at the Broadmoor! And next time I want to take a trip up to Pike's Peak - the tall snow-capped mountain  you see in all the scenic photos. If you're able to stay long enough to adjust to the altitude, there are numerous trails to hike. And listen to all the locals - DRINK LOTS OF WATER!  It's an important requirement to avoid an altitude headache. 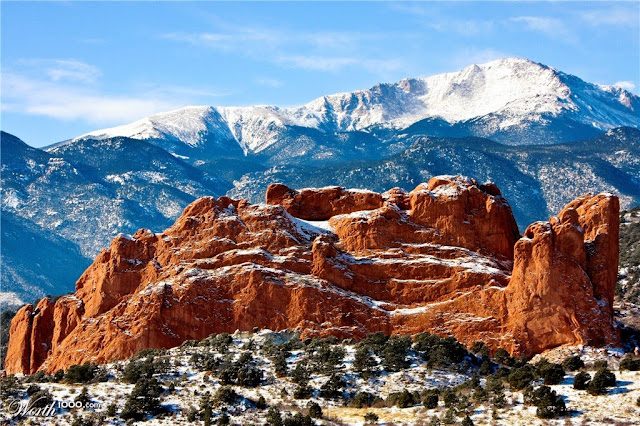