on May 18, 2015
Runway images by Christopher Pike Photographer
Portfolio images by James Knipe 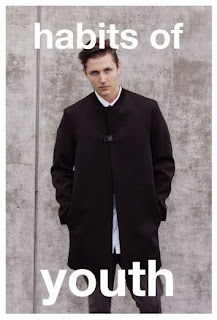 Kwantlen Polytechnic University's fashion design grad presentation - The Show 2015 - was held at the River Rock Casino Theatre in Richmond on April 9th. This year 39 strong student collections graced the runway, making it very difficult for me to choose just a few to highlight in solo articles.  (You can check out my show overview for Metro Living Zine at - http://bit.ly/1Ilohai).

Menswear is something I always enjoy seeing and there were several strong collections to choose from this season.  In researching the different students, I quickly settled on James Knipe.  He had strong illustrations and, in addition to his grad collection called Habits of Youth, his portfolio showcased a couple other concepts including West & Ford and a child's line called Riley James. This designer is also a multi-talented artist involved in Graphic Design, Film and Photography.

Knipe's collection had a nice mix of classic silhouettes with modern elements - digital graphics, interesting prints and neoprene - that bodes well for his future in this competitive industry.  The three looks shown were what I would call great mid-range pieces - they could be combined in a more casual day look or mixed to create a more upscale evening look.  A nod to his graphic skills was offered in the form of two digital prints - one on a t-shirt and the other on a short-sleeve dress shirt. The palette also offered that great mix of the very marketable black and white, but with a turquoise pop as a surprise element.

Want to know more?  So did I.  The Q & A below offers a great step behind the scenes with this talented new designer.

Where were you born, where did you grow up?

I was born and grew up in Cranbrook, BC.  I moved to Victoria after graduation.

When I was young, I was always a very adventurous and creative kid. One of the favourite things I liked to do in my spare time was to get together with my friends and make movies. It was always me and my best friend who rallied up our friends and forced them to be in our films. When they weren't around, it was just the two of us who played all the characters and produced the whole movie. I was also really into drawing caricatures of my friends and family. 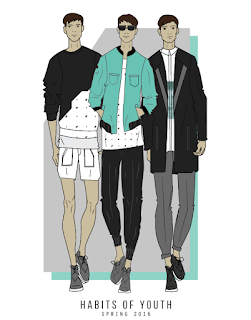 What were your interests in High School?

In high school I seemed to put my creativity aside and focused more on academics and playing sports. I had a really good time playing both volleyball and basketball, which seemed to take up most of my time.

Looking back, can you remember any signs that you would end up in fashion?

Every since I was young I always seemed to take an interest in clothing - what people were wearing and how they expressed their style. It wasn't until later in high school where I started sketching and designing clothing. I still suppressed that side of me for fear of being different or standing out – especially growing up in a small town where most people I went to high school weren't that open to anyone who expressed their differences.

Talk about when and how you decided to study fashion design. Was you family supportive?

After high school I immediately (the day after graduation) moved to Victoria, BC, where I would live for the summer before attending my first semester in University. I was enrolled in the business program because it had always interested me. I figured it would be great to fall back on if I ever did pursue a career in fashion. After not liking my courses during the first semester, I decided to talk to my parents about my concerns and how I wanted to do something more creative. I wanted to be in fashion. My family was super supportive. It was actually my dad who encouraged me to look into Kwantlen and told me about how great their program was.

Talk about your time studying Fashion Design. What was hard for you, what was easy for you, are they any high, low or funny moments you can share?

The thing that I found hardest during the program was all of the production aspects which included manual and computer drafting as well as sewing. I had to learn how to sew coming into the program, so it was frustrating when I wasn't able to perfectly convey my ideas due to a lack of skills. Towards the end of the program however, I began to enjoy sewing and pattern drafting now that I had the confidence to execute my ideas properly. The parts I enjoyed the most were design related and when we had to put together a whole brand. In 2nd year there’s a project called “Lifestyles” which basically challenged us to create a brand that everyone wanted to be a part of - not because of the product, but because of the brand itself. This is where I fell in love with branding and all of the steps involved and realized how important it is when building a business or a clothing line. 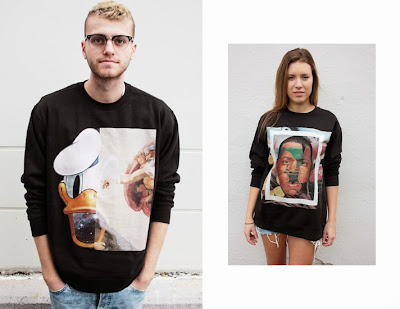 Why did you choose to study at Kwantlen Polytechnic University?

I chose to study at Kwantlen because it is the only University in western Canada that offered a degree in Fashion Design and having a degree was very important to me at the time. The only other school in Canada is Ryerson. However, I had heard that their program is less hands on in terms of sewing and pattern design. With the fashion industry, these are vital skills that one needs to have, which Kwantlen provides.

My grad collection was inspired by my love of minimalism as well my time I recently spent in Europe. I spent 6 months on exchange living in Helsinki, Finland, and also had the opportunity of travelling to the other Scandinavian countries. I was so inspired by the architecture and how minimal, clean and stark it was – especially in Helsinki. I also found much of my inspiration from the street style over there where everyone just seemed to have such a cool, sometimes over the top style that just worked. I wanted to bring those influences back here and marry them with my love of American sportswear.

In Vancouver there seems to be a large emphasis put on active and outdoor clothing because of how active this city is and how many great natural sights there are to see in the area. It’s great that so many companies are catering to those kinds of people. However, Vancouver also has a large arts and fashion community that many people don’t know about. I wanted to give clothing to those creative individuals who don’t want the “heritage, hipster” look that can be found all over the city. It’s great for those companies who have established themselves and are successful doing that, but I personally wanted to offer something different. I wanted to produce clothing that made you stand out and be noticed for something that is a bit more fashion forward and contemporary.

Because it’s catered to a younger market, I also wanted to make sure it was still accessible in terms of price, but still retain a high quality. The collection is for day and evening and is a mixture of sportswear inspired separates that can all be interchanged and worn together. I also wanted to integrate custom pattern and graphic designs that I had developed myself. I’ve took an interest in photo manipulation graphic work so I wanted to showcase this side of me as well and give each piece a personal touch. 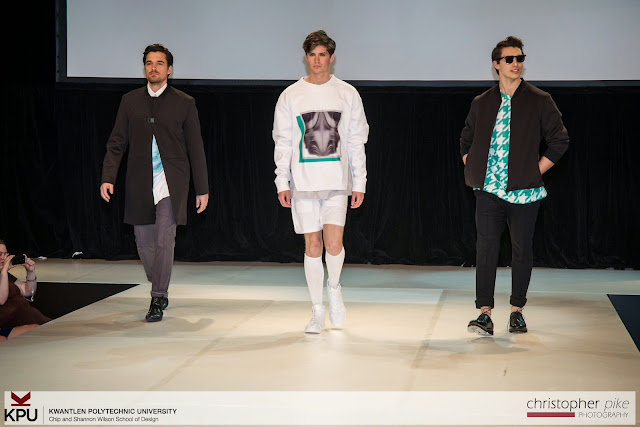 What is the palette? What fabrics did you use?

The colour palette was monochromatic which was inspired by the architecture and art in Helsinki, but because it’s for Spring, I added in an accent teal colour to give it a pop and keep it fresh. I used a variety of conventional fabrics for the t-shirts and bottoms, however for my outerwear I wanted to use fabrics that had a more futuristic hand to them. I used a neoprene for the jackets and a textured, three layer fabric for one of my sweaters. Both of these fabric held their shape very well and I was able to achieve the boxy, modern silhouette I wanted.

Do you have a favourite look?

My favourite look is definitely the all white look which is a pair of white shorts and an oversized sweater with a graphic of a manipulated face on it. It really conveys my line as a whole and I believe that when people look at it, they can really get a sense of my customer and my brand message. 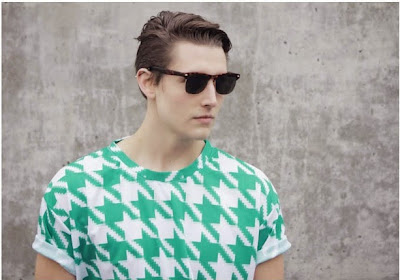 What do you think you can bring to the fashion world that is new?

I think that there is a great deal to still be done in the world of menswear out there. More and more these days, men are caring about what they’re wearing and really paying attention to new styles and silhouettes but are often afraid of trying something new. I wanted to make high end, fashion forward menswear that can be accessible to any man. That being said, there are so many inspiring menswear labels out there that are already pushing the boundaries and being successful so to be a part of that world is where I would like to be.

Where do you go from here – are you going to work for others for awhile, launch your own line, take a break and travel?

I had the opportunity to travel last year and saw so many places that it’s not at the top of my list (although there’s still much more travelling in my later future). For right now I want to work for a company and gain industry experience. Whether I choose to launch my own line in the future will ultimately depend on the market and if there’s something new I can bring to it – but I am not ruling out that option.

Can you share a quote on what fashion design means to you if possible? 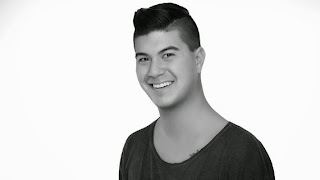 To me fashion can mean anything. I think it’s more than just the clothes themselves, it’s about being able to express your creativity through style and to express who you are as an individual without saying anything. Fashion is something that everyone takes a part in each and every day when they wake up and get dressed, so I never want to take it too seriously but rather have fun with it and enjoy the creativity behind it.