This story is one I've been wanting to write for a long time. I have already shared it with a few friends, but here we go. It begins simply............I lost my wedding ring.

When Glen and I were married in 1984, we were both poor as church mice. He didn't want a ring as he worked in the trades and it just wasn't a safe thing to wear, so we bought him an 18" gold serpentine chain.  I fidget, so didn't want a ring with anything that stuck up - not a gem, not a sculptural element. I would have ended up twirling it constantly and driving everyone crazy.

The best option financially that fit the bill was a simple ring in the style above. The small diamonds are inset so that the whole surface of the ring is flat. Of course it came in several sizes (the diamonds getting bigger as the price rose), but we could only afford the most modest version. That was fine with me. I was just happy to begin my new life with Glen and as a symbol of our choice to spend our lives together, it was perfect. 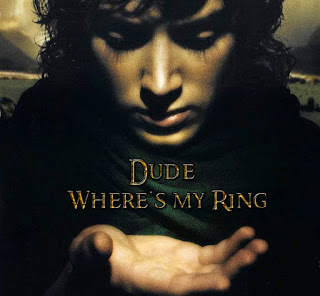 When the oldest of my three kids was in grade 11, he took a great class that taught a variety of fun skills including jewellery casting. He wanted to make me a silver ring of his own design, but needed to know my ring size. So I pulled off my wedding ring - something I NEVER did - and let him measure it.  This is the moment I totally messed up. I didn't put the ring back on right away, just sat on the couch talking with him while holding the ring in my hand.

It was over three hours before I realized the ring was no longer on my finger and I had no idea where I dropped it. For the next several years Glen and I carefully checked the vacuum bag after sweeping and regularly dug into the folds of the couch I had been sitting on. It was no use. My ring was gone and I was heartbroken. It may have been simple, but it was filled with memories. Finally. as we neared our wedding anniversary, I decided I wanted to replace it. We headed out together and picked the same design, just one more up the scale. It wasn't the original, but the symbolism was still the same.

Now is where it gets really fun.  We sold our house that same fall and were packing up everything to prepare for the move to our new home.  Magically, the ring appeared, but you'll never guess where. It was at the back on a shelf in our wall unit behind two rows of books!!! How it arrived at this location and why did I not hear it drop onto the shelf if it fell out of my hands here is a mystery that will never have an answer.

I was so happy to have the ring back and began wearing it on my right hand. Unfortunately the fit was not great and it kept dropping off, especially while we were travelling in Europe exploring Prague, Vienna and Budapest. Many days I would realize my ring was missing while we were out touring, only to sigh with relief when we got back to the hotel to find the maid had turned it in.  Something had to be done.

Years ago I had connected with an amazing, uber talented goldsmith - Pernilla Ahrnstedt of Aurum-Argentum on Granville Island - and included her story in Fame'd Magazine. I made an appointment to have her resize the original to match the new one and then find a way to combine them into one ring. We went over several designs and in the end decided the best choice was to have her create a burnished gold spacer ring, then fuse the three together.

I just picked up my new/old ring this week and couldn't be more thrilled! It not only has sentimental value, but a unique history that is fun to share.  Now to find my son's ring which I also lost, found and then lost again at the new house. SIGH! Another story in the making.
Aurum-Argentum goldsmith Granville Island jewellery Other Pernilla Ahrnsteadt wedding ring