Very few books receive five star reviews on Rotten Tomatoes. An Honest Liar is one and I wholeheartedly agree. This is not a "based on the life of" movie. This is a documentary featuring The Amazing Randi himself as well as his life partner of 25 years, Jose Alvarez. 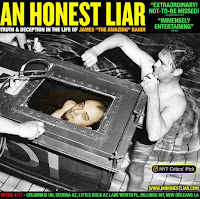 Born in 1928, Canadian-American Randall James Hamilton Zwinge found what would become his passion as he watched a magician perform on a local stage. He started as a "mind reader" but walked away after he predicted the winner of the World Series one year. People began to ask him life-changing questions and he decided to become an "Honest Liar."

Magicians create illusions which defy the senses but always admit they are tricks, making them honest liars. Under the brand name, The Amazing Randi, he became an escape artist that literally nothing could hold. That ended one night when his body could no longer hold up to the demands - a night that almost ended his life. Retired at the age of 60, he went on to devote his time to "...investigating paranormal, occult, and supernatural claims, which he collectively calls 'woo-woo'." 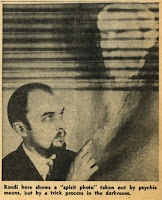 All through his career, he felt psychics, faith healers and the like were truly just magicians who did not tell the truth and it offended him. He felt it tarnished all magicians. What they did was a trick.  He and Uri Geller had a long standing feud. Despite the proofs Randi offered the public - including publishing a book called The Truth About Uri Geller - Geller continued to have a long , financially successful career that continues to this day.

Randi also took on faith healer Peter Popoff, whose ministry took a dive after Randi proved his "revelations" were done over a radio channel to an ear mic - information communicated by  his wife. Popoff was totally disgraced, yet managed to launch a lucrative new ministry after a few years.  A sad comment on the gullibility of the general public.

Famous moments include a scam he set up at a PSI research facility and appearances on high profile talk shows re-creating all the feats first done by Geller in an earlier show.  They also followed his long term relationship with Jose Alvarez that takes a difficult turn - no spoiler alert. Much is made after this incident in marketing this movie -

"AN HONEST LIAR is a feature documentary about the world-famous magician, escape artist,
and world-renowned enemy of deception, James 'The Amazing' Randi. The film brings to life
Randi's intricate investigations that publicly exposed psychics, faith healers, and con-artists with
quasi-religious fervor. A master deceiver who came out of the closet at the age of 81, Randi
created fictional characters, fake psychics, and even turned his partner of 25 years, the artist
Jose Alvarez, into a sham guru named Carlos. But when a shocking revelation in Randi's
personal life is discovered, it isn't clear whether Randi is still the deceiver - or the deceived."

In truth, I think this marketing angle is a disservice to Randi, Jose and the movie. What happened, the reasons for what happened and their actions are totally understandable given the times that they occurred in. 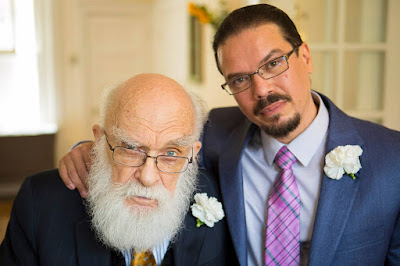 Over his time exposing charlatans, The Amazing Randi appeared on The Tonight Show Starring Johnny Carson, was interviewed by Barbara Walters and was featured on Penn & Teller: Bullshit! He co-founded the Committee for Skeptical Inquiry (CSI) and is founder of the James Randi Educational Foundation (JREF).The JREF sponsors the One Million Dollar Paranormal Challenge offering a prize of US$1,000,000 to eligible applicants who can demonstrate evidence of any paranormal, supernatural or occult power or event under test conditions agreed to by both parties. His work exposing faith healers won him the prestigious MacArthur “Genius” Award in 1987.

One fun moment in the movie is offered when he teams up with a famous very out there rock star. Again - no spoiler alerts. You'll just have to watch the movie!

I would highly recommend this film, now available for viewing on Netflix! Absolutely five stars in my book. 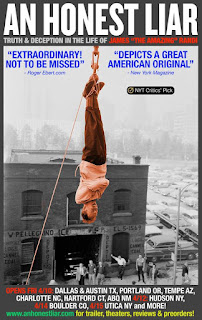