on July 07, 2015
Day two of touristing in Toronto dawned bright and early for me.  I don't know why, but I seemed to wake up early most days on this vacation. No worries - a writer always has something to fill their time. As this was the last day before returning to Vancouver, and we had such a long, amazing, tiring day yesterday, today was to be at a leisurely pace and not start until noon.

For the first couple hours I answered emails, took care of social media and then spent some time "putting pen to paper." Writing - when it's only purpose is to let my thoughts flow - is particularly enjoyable. Around nine I had reached my limit and it was time to treat myself to a guilty pleasure. It didn't take long for me to get ready and out the door. First stop of the day was Starbucks for a latte and small bite, then it was on to my destination.

Only two block from the condo was The Bay on Bloor Street. Several times a year The Bay offers a great sale on their costume jewellery. I support local artisans as much as possible and own many cherished pieces. But I find what I wear on a daily basis seems to get lost or broken - earrings in particular. It's like socks and laundry - I end up with one of this and one of that. Where does the other earring go? So once a year, I head over to The Bay during their sale and snag a nice collection of interesting but inexpensive pieces to fill the void.

Then it was time to head out with one of my friends for a short jaunt (the other unfortunately had a full day of work). We started with a leisurely stroll to a local restaurant - The Bishop and Belcher - where we enjoyed mimosas and a full English Breakfast - bacon, sausage, potatoes, eggs, beans, grilled tomato and toast. I couldn't finish it all, but it was delicious and the waitress treated us like royalty. After we were filled to the brim, we flagged down a cab to take us to our one planned outing - Evergreen Brick Works.

It's honestly a little hard to describe. If you don't wander and explore, you could easily miss some of the interesting sights here.  This quote is from their website -

The first building we entered held a garden market, followed by a country store and then Cafe Belong at the back. We wandered the store offerings and ended up purchasing some soup mixes, a jar of curry and some chocolate caramel popcorn to take with us. Outside there was a bike shop and then a large open pavilion where two drummers were entertaining visitors. Depending on the time you visit, there is a market with a variety of vendors selling their wares. By the time we arrived this day, the market was just closing down. The Brick Works even offers an ice rink in the winter.

Working our way behind these buildings, we took some time to sit, soak up the sun and enjoy the peaceful setting at a large pond. Trails meander through the surrounding park for those who want to explore. Continuing on we passed a large, interactive children's garden full of things to do. There was a ton of busy, smiling kids there enjoying themselves to the nth!

Then we entered a modern community centre. In a nod to their roots, the lobby showcased an enormous, antique brick press. Through another door was a building housing the historic kilns.This has been left mostly as is and used for storage, art shows and even in one more open space, for wedding receptions and other events. They were setting up a wedding reception that day with giant crystal chandelier, dance floor and white table settings.

It was time to head back to the condo for some downtime as the day before had been so busy, but after an hour I decided to wander down nearby Church Street (also known at The Village) - a final exploration before heading home. Toronto has a thriving LGBTQ community which embraces this neighborhood as their own. With pride celebrations in Toronto just over (June 19-21), the street was still awash in rainbows - from the TD Bank to business decorations to even a cross walk.

There was a mix of old and new architecture, but it was the old buildings converted into restaurants and shops that drew my eye.  The area reminded me of Brooklyn. For those I know in Vancouver the feel was a mix of Gastown (in terms of the look) and Commercial Drive (in terms of the feel).  I also noticed murals covering some buildings and in feature spots on others. When I passed a sign for an LCBO (Liquor Control Board of Ontario), I decided to pop in and and pick up wine to bring to the evening meal.

The entrance took me into the most amazing Loblaw Grocery I have ever seen. I stood in awe as I took in the sushi counter, the salad counter and more. I should have made a walk through as later that night my friend informed me over supper they have a two-story cheese wall with ladders to access the more expensive offerings located on the top shelf - some under lock and key. I would have loved to have seen that. Back to the condo and up to the 38th floor for a last light meal of gourmet salad and a final chat, then it was down to the room to pack. 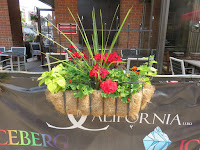 Unfortunately departure was a gong show. I worried I didn't set my alarm right and woke up at 6 a.m. I had arranged the taxi for 10 as I thought my plane left at one and the drive would take over 40 minutes. Wrong! The plane left at 1:55 and as it was Sunday morning, the drive only took 20 minutes. The taxi also arrived 20 minutes early - fortunately I was there waiting.  So that left me arriving at the gate by 10:10 for a 1:55 departure.

Our plane landed an hour before we needed it, but delays started to get posted. WHY? Well, that plane blew out a tire on landing - word has it was a pretty rough ride - so they had to find us another. This meant a move to another terminal with pilots and counter staff leading the way. It didn't stop there. The flight crew was on a delayed flight arriving at the old terminal. They landed and ran over only to find the delays had put one attendant over her legal allowable hours. A replacement had to be found. Finally, an hour late - and four hours after I arrived at the terminal - our plane took off. 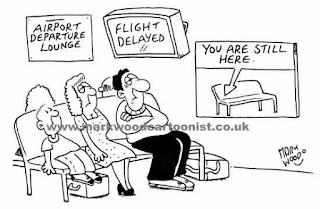 By the time we arrived in Vancouver five hours later I was dead on my feet, but happy to be home. I can't wait to return to Toronto. There is so much more to see and do and a few things I would like to see again on a more leisurely basis. And I definitely need to eat at El Catrin again. Soon..............just need to get those travel dollars in place.
Bloor Street Brick Works Church Street Commercial Drive Evergreen Brick Works flight delays Gastown LGBTQ Loblaw market national geographic Starbucks The Bay The Village toronto travel Vancouver