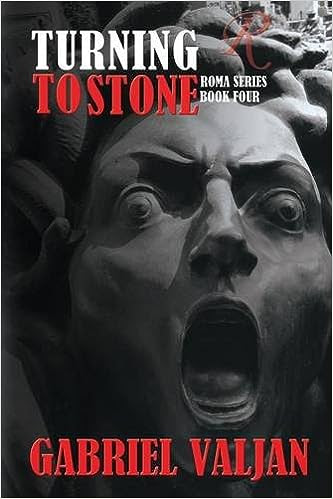 Forensic accountant Alabaster Black has always been steps ahead of her former employer, Rendition, a clandestine and apparently lethal organization. Once the star investigator of financial crimes, she fled from the United States to Italy, under a new name: Bianca Nerini. She carries on her work with a group of trusted friends, although a mysterious contact by the name of Loki reaches out to her on occasion. In this fourth installment, Bianca is in Naples against the Camorra, a crime syndicate unlike the American or Sicilian mafia.
Review

At the end of Threading the Needle, we are introduced to commissioner Aldo Giurlani. After the team wraps up the case to his satisfaction, he opens the door for the next book by asking Gennaro to head off to Naples to do special investigative work. He can take the whole team with him. Gennaro knows retirement is looming, but accepts the challenge.

The international intrigue in Turning to Stone takes us first down a more traditional path - the Mafioso families (referred to as The System here) we have been exposed to in book and film. In this story, three crime families go to war, but it is the Camorra working behind the scenes that we need to keep our eye on. From this beginning the plot takes a new twist. Their new nemesis,  Matteo, is a part of the System but well-educated and taking terrorism to a new level by bring it into the realm of international finances.

The whole cast is back - Bianca Nerini (aka Alaster Black), Dante, Gennaro, Alessandro, Farrugia and Silvio.  Also returning are U.S. FBI Agents McGarrity and Murphy as well as U.S. Attorney Michael Farese. The question again arises - is Farese friend or foe? He seems to show up like a vulture after every significant assasination. Loki - Nerini's unknown online connection - also makes regular appearances offering frustrating clues that need to be untangled.

Author Gabriel Valjan again offers a complicated plot with lots of twists, but the death toll rises in this sequel as the families are driven to war. Dante and Nerini continue to struggle to build their relationship and fabulous food again appears to add a softer note.


Behind the scenes interview with Valjan HERE!