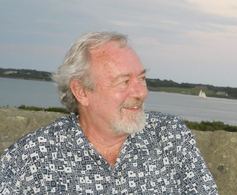 You have had a very varied career path. Can you share a bit about your journey to becoming a writer/published author?

When I was 17, I was with a date in the backseat of my best friend Michael Joyce’s ’57 Chevy when he recited a poem he had written to his date in the front seat. We were on South Park Avenue in Buffalo, New York, headed out of town for some reason. I remember the line, “Run run run, children on a sugar cube road.” I was impressed. No one I knew had ever written a poem before. The next day I wrote my own poem, and I couldn’t stop. Up to that point I had figured I would be a painter like my mother. I have been writing and publishing the 53 years since, living by the word one way or another.

What prompted your move to Samoa to teach and what did the experiences of living there for over 26 years bring to your writing?
I moved to Samoa in 1981 because Ronald Reagan had been elected President. I had experienced enough of his anti-progressive, anti-intellectual rule when he was governor of California and I was at UC Berkeley. I had been to Samoa five years before, on a wander. A former lover (and future ex-wife) was now chair of the community college’s English department. I had always liked teaching—the performance part. I taught there for seven years—English, Literature, and Folklore—before moving on to grant-funded preservation jobs.

Samoa taught me a lot. At 36, I wasn’t about to change much; but I still had a lot to learn. About being a minority, the outsider; about how entertaining differences could be; about humility and a whole new way to be polite; about naked nature and living in it; and a lot about Samoan history and culture. My last 13 years in the islands I was Territorial Historic Preservation Officer.

My first four novels, in the Jungle Beat mysteries series (Thomas & Mercer), are all set in Samoa, with a Samoan detective narrator and casts of primarily island natives. For me, the four books comprise a contemporary ethnography disguised as police procedurals. I had to write about what I had learned of this place where things were different.

The sometimes languorous, sometimes lingering pace of my storytelling I owe entirely to a quarter-century in the tropics, where everything slows, time naps, and leisure means being given the chance to appreciate.

Writing for me is the other world. I guess maybe like heaven is to those believers. The difference is that I get to go there now and then. It’s not always easy, but it is always worth it. After the hard part of starting and framing (and restarting and reframing), and once the central actors have arrived—in costume (all rehearsals are dress rehearsals here)—and begun asking me what is this all about, inside that next book is where I want to be. Of course, the actual—sometimes called the “real”—world too often jealously intercedes. But when I can escape and get there—and I try every day—it’s like home free! And I get to play with my new (and some old) friends. All around goal is it.

The chore? The mistakes. When you’ve written yourself into a cull-d-sac. When it just does not fucking work. When you begin to sound too much like yourself. When your actors quit out of boredom. Or any time you can’t go there.

What inspired New Jerusalem News' story line? Have you visited or lived in this area (or a similar one)?

The anonymous model for New Jerusalem is Newport, Rhode Island. For the past eight years I have been retired on Conanicut Island in the middle of Narragansett Bay across from Newport. A few years ago—right after I got here—there was a big protest—Save the Bay—over a proposed LNG terminal up in Fall River. (Just another ethnography.)

One of the strengths of this book is the sheer number of individuals you developed that were very real - right down to the way they spoke, reacted and spent their days. How do you develop such unique characters so fully? Do they become real to you as you write?

For me, novels have always been about their characters. I don’t remember plots; I remember people. (You will remember Lydia nailing the burned toast to the kitchen wall.) Once a character arrives and insists on staying, I do spend notebook pages free-writing them into existence. For major characters I have to have an actual, human model in mind, or, more likely, a composite of real people. One of my favorite people in New Jerusalem News is Lydia, the aging painter tasting the freedom of her dementia. Lydia, bless her, is the emboldened hybrid doppelganger of two of my favorite lady artist friends. Sometimes, I bring back dead friends to enjoy their company again.

As I said, in my other, preferred world these actors and I spend quality time together, for a year or more. I miss them when the book is done and we part.

Is having the main focus on the daily lives of the characters a trademark in all your books, or is it unique to New Jerusalem News? What are the challenges to keeping the reader interested and turning the pages with this slower pace of story telling?

Ah, yes, the challenges to keeping the reader interested and turning the pages.

As a young man I spent enough time performing on stage to learn that dread of the audience losing interest. (It is palpable.) I think this is (or should be) the novelist’s overriding fear—reader disinterest. In this age, with an audience media-trained to judge entertainment by the frequency and violence of explosions, murders, and orgasms, what is a pacifist puritan author to do? It is a challenge.

Often times, I’ll leave it to my actors. Improv. I’ll set up a scene and tell them, go for it, make it good, don’t lose anyone. I guess it may be a trademark of all my books. My characters seldom miss a meal.

Are there any new books on the horizon?

Oh yes, the Dominick Chronicles will continue. The next saga, Some People Talk with God, is due out next June, to be followed by Next Exit Paradise, Port Athens, and Unholy Grail, all from Yucca/Skyhorse Publishing.

Do you have any advice for those just beginning on their writing careers?

What? Are you crazy? If you are going to start, don’t stop. Write every day. Write all kinds of things. Face deadlines bravely. Savor details. Marry well. Good luck with marketing. Buy my books.