10 Facts of Life Gnarly Taught Me


Fans of the Mac Faraday Mysteries need no introduction to Gnarly, Mac Faraday’s German shepherd, the only K-9 to receive a dishonorable discharge from the United States Army—which they still refuse to discuss.

Highly intelligent, Gnarly has a mind of his own. He is a favorite character for many readers and I enjoy writing his part. Not only is he fun, but being so intelligent, I have actually learned some facts of life from him. Below are just a few things:

1) When it comes being tough, size does not matter. Even though Gnarly is a hundred pounds of fur and teeth, he learned the hard way that bravery outweighs brute. In A Wedding and a Killing,  he got his clock cleaned by a six-pound Chihuahua named Benny.

2) When your owner isn’t around—anything goes.

3) Pay no attention to the cat. No matter how innocent you look, humans will still notice the mess in the kitchen, as they did in The Lady Who Cried Murder.

4) Nagging is a powerful negotiation technique. 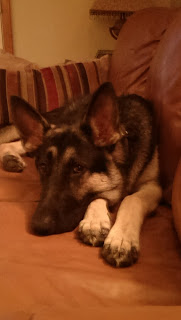 5) If you can touch it with your tongue, it’s yours—especially human food.


6) Humans have the 30-second rule in regards to dropped food. For dogs, it’s the thirty-year rule.

7) Humans have complicated everything—mainly their priorities. For humans, it is all about sex, money, and power. For dogs, it is sex, sleep, and food … not necessarily in that order.

8) Dumpster diving is not as much fun as it looks—as Gnarly learned in The Murders at Astaire Castle.

9) Humans are too uptight. They fail to appreciate the little things in life like sticking their heads out the car window and letting the wind blow through their hair.
10) Dogs rule!

Behind the scenes interview with the author - HERE!