Interview with Eric Burkhart, author of Mukhabarat, Baby! My Life as a Wartime Spy for the CIA 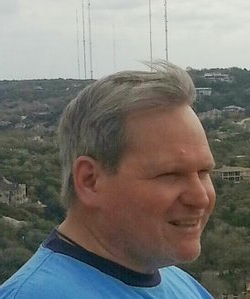 Can you share a bit about yourself growing up and what drew you to embrace a career as a CIA Case Officer?

This is such an important question to ask, because I have noticed that many Agency Case Officers share childhood experiences. I was raised in France, with French being my first language. My father was in the U.S. Army, and our family made Europe our home until my father's retirement in 1977.

As a child I was fortunate to experience a number of different cultures. This enhanced my willingness and ability to assimilate into foreign environments as an adult, something which all CIA Case Officers must learn to do. Traveling to unfamiliar places where people speak unknown languages and practice different religions, can be very intimidating. Therefore, growing up surrounded by different languages and cultures proved invaluable to me as I progressed in my Agency career.

I was also raised in a conservative household, and patriotism was woven into the fabric of my family's traditions. I was raised with a rock-solid faith in the principles for which our nation was founded. CIA officers are dedicated to encouraging freedom around the world, as the intelligence collected from all corners of the globe help our government support Democracy.

When did you leave this career behind, and why?

During my first tour overseas tour in Kosovo working as a CIA Case Officer, I was tasked with meeting a foreign national who had access to important confidential information. This individual poisoned me on three consecutive occasions, while we were meeting over dinner. Although the toxic exposure almost caused my death and resulted in permanent nerve damage, I was able to continue my career for another decade. The Agency was very supportive during this time, and when, in 2010, it became too difficult to continue work because of my health, the Agency sponsored my 100 percent Disability.

You worked in Iraq in 2003; what inspired you to write a memoir of your time there over a decade later?

Although my memoir focuses on my time in Iraq from 2003 to 2004, I also write about other tours (Kosovo, South Africa) and about the Agency in general. I made the decision to write a book as part of Therapy once I had retired. During my career, it would not have been possible (or allowed) for me to write a book. Also, it wasn't until I retired that I felt I had enough experiences to do a book justice.

One important point I would like to add. Agency officers spend their careers watching news stories provide a sometimes inaccurate perception of the life of a CIA employee. Certainly Hollywood promotes ideas about the CIA and espionage in the 21st century was that has no basis in reality whatsoever. I wanted to write about my colleagues and the everyday responsibilities they accepted working clandestinely for their nation in hostile environments. The glamour never makes an appearance; instead, it is replaced with terrible food, no running water, limited to no contact with family, and the fear of losing your life.

CIA offers receive very little positive reinforcement, as they must live cover stateside and not discuss the operation they completed to locate a wanted terrorist fugitive. I wrote my book in order to give them a voice, without having to give up their identity.


Given the time delay, did you struggle at all to accurately remember specific event details or interactions with individuals you mention? If so, how did you go about fact-checking?

CIA Case Officers are trained to pick up on and remember details. The stories that I chose to write about rose to the surface of my memory, because of that reason. Fortunately, I have close relationships with many of my former colleagues. On more than one occasion I was able to reach out and clarify some particular detail in a story.

Writing one's first book can be challenging. How did you approach the writing process? What did you enjoy the most? What was the hardest?

I am fortunate to know a few published authors, including Lindsay Moran, author of the bestseller, Blowing my Cover, My Life as a CIA Spy. Lindsay and I were part of the same training class, and she was serving in Macedonia when I was in Kosovo. She had a front-row seat to the toxic exposure event, and assisted with the proof-reading of the relevant chapters.

As for the actual mechanics, I began the process by identifying the subject matter of each chapter. Second, I outlined each story/chapter, and brainstormed for weeks to make sure that no details were excluded. I was fortunate; with Lindsay's guidance, the writing came relatively easy. The most frustrating part of the process, was putting to paper the difficult details of certain events, knowing that in the end the CIA review process was likely to redact the best parts of the book.

Is there any advice you can share to help other new writers ready to start work on their first book?
I believe a successful effort must come from the heart, especially when writing a memoir. Choose a subject that refuses to let you go, and you may discover that all along the story just wanted to be shared. Also, if writing non-fiction, consider getting the permission of the persons about whom you intend to write. I sleep well at night knowing that no one in my book was surprised by their inclusion.

Where do you go from here? Will there be other books?
I have worked very hard to regain my health to the point that I can return to work. I hope to return to the Agency in a training capacity sometime within the next year. At this time I can't imagine writing another book.