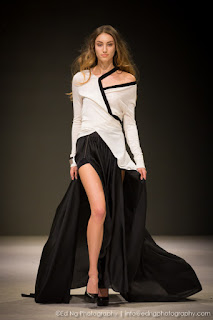 It's hard to believe this is my 19th season covering Vancouver Fashion Week (VFW). That's right, 9-1/2 years.  I wanted to write and the opportunity arose in July of 2007 to help launch a new magazine focusing on the professionals working in the Vancouver fashion industry. I jumped excitedly into the deep end and had to figure it out as I went along.

I showed up to my very first VFW totally oblivious and wearing my low-end Zellers attire and cheap Payless shoes. Despite the fact I didn't have extensive credentials and lacked a cool wardrobe, I was treated with respect regardless - something I will always be grateful for.

Usually I don't attend the opening gala as I sit through all shows during the week, but a couple things drew me. First, it was a great chance to connect with industry friends I had not seen in a long time. The runway between scheduled moments was a free for all of people snapping images together and photographers arranging groups shots. There were a lot of smiles and hugs.

Then there was the Industry Originator Awards. The list of nominees was strong this year and included several names of people I have connected with over the years such as Ivan Sayers, Lisa Gellert, Jacqueline Kirby, Wendy de Kruff, Michael Pope and David Fierro.  Some I have had the pleasure of interviewing, some have supported my journey and helped me learn the ropes. Each of them have a special place in my heart. You can check out the full list of nominees HERE!

Lastly, there were several runway shows in addition to the designers spotlight.  The Label (from Australia) and Simon Barth Couture (from Vienna) each offered strong collections with really unique, interesting elements. But the show I absolutely couldn't miss was designer RozeMerie Cuevas' S/S 17  JAC by Jacqueline Conoir collection. Not only is she a talented artist, she is also generous and kind, taking the time to give of herself to her clients and to the community, including mentoring students.

I connected with Cuevas in 2008. She was my first high end, established designer interview. The minute I walked into her huge studio/boutique, I was intimidated by my lack of proper clothing and experience. I felt like an impostor. However, she immediately put me at ease and opened our interview by sharing a really poignant story, the same one she shared with the audience last night.

Cuevas sewed from an early age and was always making clothes for herself and her friends. When she was in her late teens, a friend talked her into doing a fashion show at Richard's On Richard's - one of the hottest clubs at the time.  She showed up with all her clothes in trash bags only to see the "real" designers walk in with their fancy racks and pristine, logo'd garment bags. Self-doubt hit. Why was she here?

Nerves meant instead of watching the show she was hugging the toilet in the bathroom, but it was there she overheard a couple of women talk positively about her clothing. She was hooked - she had to be a fashion designer and headed off to Paris to study.

I was touched. It was just the story I needed to hear in that moment. Despite my lack of wardrobe and industry knowledge, if I really wanted to interview and write, I could make it happen. It all came down to passion and sheer hard work. I had the passion and was ready to work hard. I could do it.

I began to work with one of her stylists each season and over the next nine years, slowly built a great wardrobe and learned how to style my looks. In fact, last night my outfit was all JAC - a beautiful kimono inspired silk/linen jacket from Fall 2016 and a pleather/knit knee length black skirt from two season ago.

Cuevas is always challenging herself as a designer to grow, to never become stagnant.  Her first label was Jacqueline Conoir. Then she launched the younger, more daring JAC line. A few years ago, an invitation came to work with partners in China to launch her brand there.  Asian customers were hesitant at first. The style and look was so different from what they were used to. But all it took was a trip to the dressing room to try on one outfit for the women to get excited. They walked out with their head up, their shoulders back and exuding confidence.

By  2015 there were 25 JAC signature stores across China.  A year later that number has grown to 70. As a part of the China's Silk Road Expansion, JAC signed a project this year to be the anchor tenant moving its head quarters to LingPing - Yuhang district of Hangzhou. This is one of China's new Art Fashion Towns linking China and JAC to the rest of the World. And JAC was the only Fashion House to be recognized during Prime Minister Trudeau's visit to China during the G20 Summit in Hangzhou this year.

What an amazing way to start Vancouver Fashion Week. I can't wait to see what the rest of the week holds.