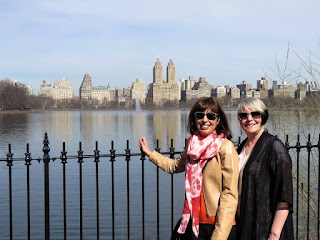 Two days left to go and they were going to be glorious. The wind was gone, the weather outside was sunny and warm.  And I had the privilege of finally meeting a social media friend in person after two years.

When I launched my first book - Life Outside the Box: The Extraordinary Journeys of 10 Unique Individuals - in February 2015, I decided to book a virtual book tour through iRead Book Tours.  Gabriella Contestable was one of the wonderful reviewers who gave my book a thumbs up and then reached out to connect. She is also a published author with one fiction book to her credit and a new non-fiction book coming out this year. She also is the president of Su Misura which organizes “tailor-made” sensory travel journeys for women celebrating Italian fashion and artisanship in Florence.

Magic happened this trip as the Airbnb I booked was only 2-1/2 blocks from her home and on the exact same street.  She popped by and picked me up this morning and we headed off first for a leisurely walk through Central Park.  I had never actually seen the small lake there and the trees lining some of our path were in blossom.  Beautiful. Although the pic I snapped makes the park look empty, there were walkers, joggers, tourists and artists all scattered around us. One handsome jogger agreed to snap our picture with the lake and skyline in the background.

There was a destination - the Cooper Hewitt, Smithsonian Design Museum.  First stop on arrival was the Tarallucci E Vino Cafe operated by Italian restaurant and caterer Tarallucci e Vino.  Gabriella had an espresso and a pastry.  I decided on a mushroom quiche with salad and a large latte. Other than when I met Amber, I've been living on instant coffee in the mornings. Having a well-made, quality latte was a real treat. There were a few places to sit indoors but it was just too beautiful outside. We snagged a table out in the Arthur Ross Terrace and Garden.

The stroll through Central Park and conversation over food gave us all the time we needed to catch up. It was time to head in and start exploring the exhibits.  It was then that another moment of magic happened.  A handsome and extremely friendly young man behind the entrance desk - Eric R. DySart - looked up and broke out in a huge smile. He loved my new hairstyle - asymmetrical with a black rectangle feature on the long side.  He asked if I ran a museum or...........

At my age, moments like this come rarely and I was truly touched. I dragged him out from behind the desk to get a picture together. Alas it is out of focus, but I have included it anyway as it is a fond memory. I have been approaching, talking to and interviewing people for over a decade. A moment like this stands out as rare. To the Cooper Hewitt, this positive and generous spirit is a true asset to your organization. Use him wisely.
..

One very cool thing at the Cooper Hewitt is guests are offered a special flat-end Pen at the admissions desk. This is used to keep track of any item that catches your eye. You just press it to an X next to the description and it stores the item in a passworded file specifically for you.  You can view pictures and descriptions of everything you scanned on your mobile device or at home on your computer just by going to the website and putting in your password.  Brilliant!


The first exhibit we explored was one called The Jazz Age: American Style in the 1920's. This is a multi-media experience of more than 400 examples of interior design, industrial design, decorative art, jewelry, fashion, and architecture, as well as related music and film. Giving full expression to the decade’s diversity and dynamism, The Jazz Age defines the American spirit of the period. 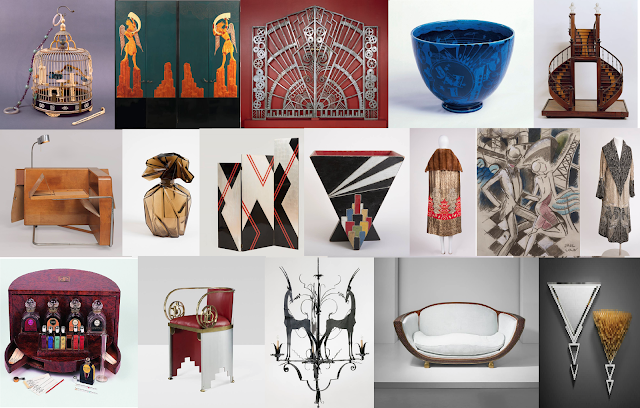 Related to The Jazz Age was a second exhibit we explored called Jeweled Splendors of the Art Deco Era. The Carnegie Mansion’s Teak Room was the setting for this showcase of more than 100 extraordinary examples of luxury cigarette and vanity cases, compacts, clocks, and other objects of the era are now on view in the . The collection included work from the premier jewelry houses of Europe and America—among them Cartier, Van Cleef & Arpels, Lacloche Frères, Boucheron, and Bulgari—dating from 1910 to 1938. 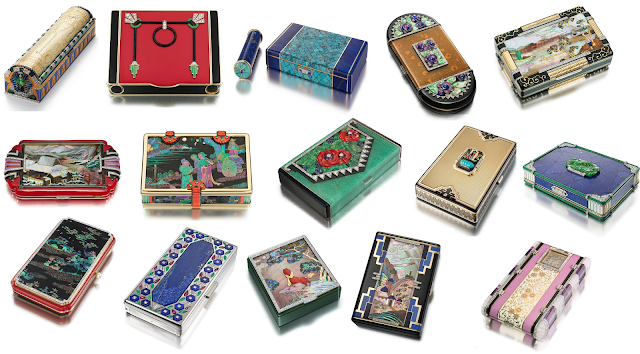 The World of Radio exhibit came next. A Depression-era, monumental batik mural designed by Arthur Gordan Smith titled The World of Radio provided the inspiration for this exhibition of iconic radios, radio design drawings, and photographs from the early twentieth century through the present day. Designed by  Radios designed by pioneering industrial designers such as Donald Deskey, Dieter Rams, and Henry Dreyfuss are installed alongside drawings by hand of prototypes for radio consoles and cabinets designed to enhance a modern home

Our final stop was an exhibit called Scraps: Fashion, Textiles, and Creative Reuse which offered the work of three designers who put sustainability at the heart of the design process: Luisa Cevese, founder of Riedzioni in Milan; Christina Kim, founder of dosa, inc., in Los Angeles; and Reiko Sudo, managing director at NUNO in Tokyo. Through more than forty works, this exhibition explores key facets of sustainability, such as the efficient use of materials and resources, the preservation of local craft traditions and the integration of new technologies in the recycling process.

Our senses now overloaded, it was time for Gabriella and I to enjoy a leisurely stroll back home while we talked more about what we saw and life in general. In a moment of inspiration, I snagged a second large latte to enjoy as tomorrow it would be back to instant. Although we tentatively planned to have supper together the next night (my last in town), things just didn't come together for it to happen. 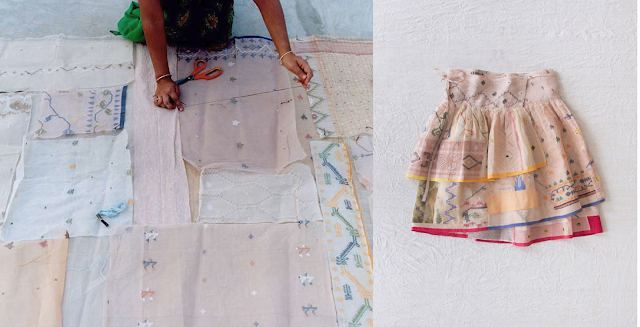 Back at the Airbnb, I changed to a cooler sundress as it really was getting hot outside and headed off to explore a destination suggested by a my friend Kean Tan - Chelsea Market. The market is a food hall, shopping mall, office building and television production facility. It is a block long and a block wide and just a short walk from the Hudson River in the area of Manhattan known as the Meatpacking District.

In my walk through, food and food related items seemed to be the main focus of most outlets with more than thirty-five vendors purveying everything from soup to nuts, wine to coffee and cheese to cheesecake. It has been open for 15 years and attracts 6 million visitors annually.

I decided to stroll the full length of the market - a long hall with occasional side shoots - to see what kind of food I wanted in particular and what was for sale in terms of merchandise.  You couldn't help but get hungry just looking at all the unique choices.

At the very very far end, the hall ended in a large room of vendors called Artists and Fleas.  I did a general walk through and saw many items of interest, but one in particular caught my eye. A vendor right at the entrance had this zipper dominated bolero and unique belt on display. The bolero made my craving meter fly off the register - well at least until I asked the price. It cost $250 USD.  The craftsmanship of this amazing work of art meant the asking price was well justified, but regardless, it was sadly outside my budget or I would have snagged it in an instant.  I'm still dreaming about it though. You can get more information on Artists & Fleas HERE!

While there were a lot of really crazy, interesting food establishments, I decided I was hungry again for pizza, something I don't often indulge in at home.  Of those offered, Filaga seemed to have the most luscious looking selection. I ate my large slice perched on a bar stool at their counter, savouring every mouthful.  Filaga also offers Crocchette Di Patate , Zeppole, Cannoli Siciliani, Calzone Al Pollo and Arancine (tried it, but not as good as the pizza), 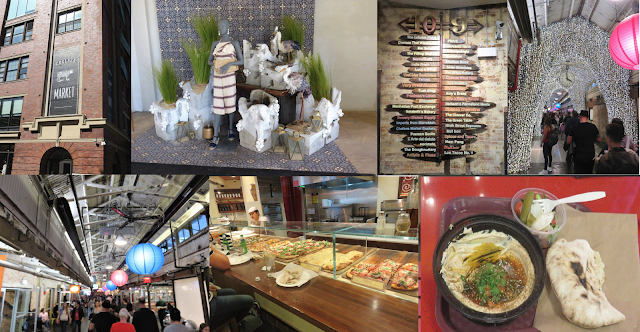 As it was only late afternoon, I decided to pick up something to take with me for later. and settled on hummus from Dizengoff, Named for one of Tel Aviv’s most iconic streets, Dizengoff NYC is an authentic, Israeli-style hummus stall (hummusiya) like the ones found around every corner in Israel. They serve freshly-made hummus (heavy on the tehina) – topped with rotating seasonal garnishes like hot spiced lamb with pine nuts or avocado with harissa – accompanied by fresh, hearth-baked pita, chopped salad, and Israeli pickles. While I went with the classic, the menu was so intriguing, I've decided to include it (minus the beverages) here.

It was definitely time to start heading home, but I decided to not take the closest subway. Instead I walked the streets for about another 8 long blocks enjoying the sun, the architecture and the buzz of the city that surrounded me. I only had one more day to go and wanted to enjoy the last of my time here as fully as possible.
art deco Artists & Fleas Central Park Chelsea Market Cooper hewitt Dizengoff Filaga Gabrielle Contestable Jeweled Splendors New York City NYC Tarallucci E Vino The Jazz Age travel World of radio