on April 20, 2017
My dear friend Randi Winter, a travel agent and former NYC resident with family still in the area, happened to arrive in town the same day I did.  Before we left, we decided to book one day together. That day ended up being my first day in town.

There would be no slow start to this holiday. Despite being tired and a little under the weather, I needed to get up and out the door fairly early this morning. I was a bit late.

The first stop for anyone who really wants to get into the feel of NYC is the subway. It can be confusing, especially on the weekends when some lines don't run. Despite the occasional struggle, I still feel it's well worth the effort.

As you go down the steps, you'll see a couple machines where you can purchase your one week pass. This pass is not only good on the subway system, but all buses. This time around the cost was $32 US for a 7-day unlimited pass.  The machine in my local station wasn't accepting credit cards that day, but fortunately I had cash on me.  Last time visiting, I purchased a fold up transit map so I had already laid out my course with it in the morning before I leaving home. I highly suggest this.

I was to connect with Randi and a young fashion designer - Kate Miles - at a coffee shop where they were having a meeting with Eric Gordon of Beyond Time Square about collaborating on a project. I got on the right train without a problem and got off at the right stop.  BUT - it was my first morning and I was tired, so I didn't have a solid feel for north/south/east/west yet.  After I few blocks walking the wrong way, I sorted it all out and arrived about 15 minutes late.

As soon as they finished, the three of us headed out for a day of exploring.  The first thing I discovered was I had forgotten the memory card for my camera at home. There would be no early pics for me other than a few on my cell phone which doesn't have a very good camera. SIGH!  I would have to pick one up sometime during our walk about.


The Museum at F.I.T. was our second stop. There we found two fashion exhibits awaiting. In the Fashion & Textile History Gallery on the main floor was a show called Black Fashion Designers, which explored the experiences of several generations of fashion designers of African descent from the 1950s to the present. 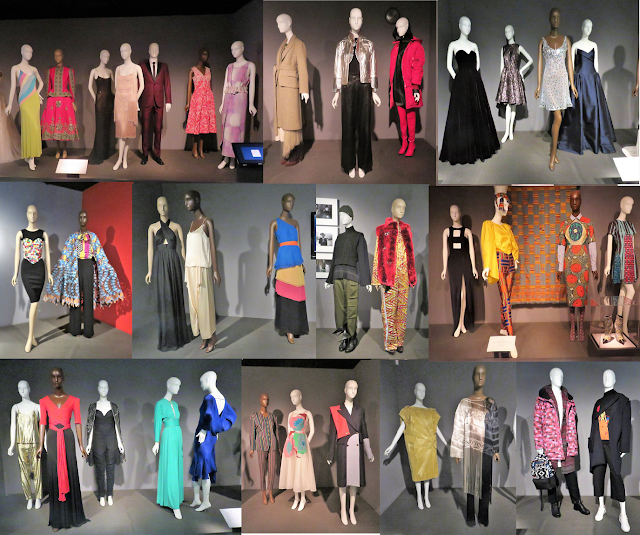 Downstairs in the Special Exhibitions Gallery was another called Paris Revisited 1957-1968, highlighting one of the most groundbreaking time periods in fashion history. 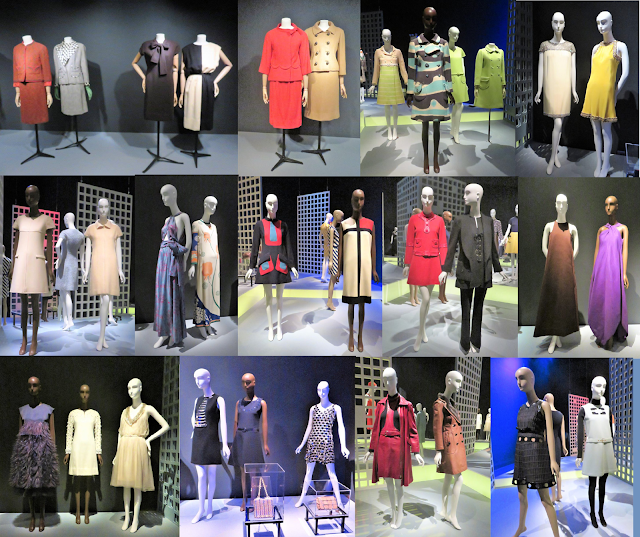 After walking through both galleries, we decided to head over to B&H Photography.  I stumbled across this amazing, huge, internationally known store on my last visit. Randi knew about it as well, but Kate had never been there. It was fun to introduce her to this unique experience.  The store covers a whole block and has two full floors. It is truly a photographer's mecca. 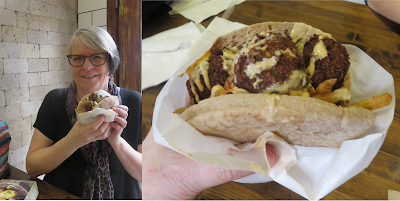 To get a memory card, you have go to the counter on the second floor and order it.  The order is then placed in a bag on a conveyor belt which goes around the top floor and then downstairs.  You take your receipt to the cashier to pay, then behind the cashier is the pick up area where it is already bagged and hanging on a hook.  All this for one little memory card. Too funny.

LUNCH TIME!  There were so many choices, but the three of us choose the easy option. Across the street from B&H is a tiny Kosher deli with a few seats called Pitopia. It's top offering in my opinion is their Falafel. It's the best I've ever had. When I tried Falafel in the past I always found it dry. Here it is cooked fresh to order - crispy on the outside and moist on the inside. Delicious! 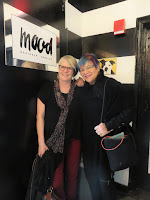 First you pick the type of pita (or the no pita option in a bowl) and then you choose up to five additions from a long list of possibilities including - Israeli Salad, Pickles, Lettuce,  Sauteed Onions, Tomatoes, Sauerkraut, Carrots, Cucumbers, Raw Onions, Charif , Chili Aioli, Garlic, Mayo, Tahini, Ultimate Buffalo, Honey BBQ, Honey Mustard. Sweet Teriyaki. Hummus, A few Fries or Scoop of Mac. Turns out it's traditional to have a few fries tucked in, so I chose that as one of my five additions.

Hunger sated, we headed off. Our next destination was one that drew women in droves - the shoe floor at Macy's. We decided, though, to make one stop along the way. Mood Fabrics has become famous through being featured on Project Runway. Honestly, as a lifelong sewer, most fabric stores are pretty much the same.  I did see some wonderful buttons made in Italy, but my favourite moment was snapping a photo with Randi under the Moods sign.


We arrived at Macy's and headed up to the second floor to look at shoes. The store's shoe floor is the largest in the world, with more than 250,000 pair of women’s shoes showcased in a posh 63,000 square-foot space. There was a shoe sale going on which was exciting. But even better, Randi knew the side rooms where all the seriously discounted shoes were. I picked up a pair of rhinestone encrusted black sandals for under $30 and a pair of metallic animal print  Michael Kors heels for under $70.  Fist pumping ensued.

Then we descended to the main floor to check out the annual flower show. It's impossible to explain what it was like coming down the escalator into a sea of floral displays. First the lovely aroma hits you. Then you're visually overwhelmed with a sea of colours and textures. It was such an interesting experience I went up the escalator and came down again to enjoy it a second time before I strolled through the large show. The theme this year was Carnival and they pulled it off beautifully.

Shoes purchased, flowers enjoyed - it was time to explore the garment district where Kate was interning.  We first jumped on the subway where I took a picture at the tile sign for Houston - pronounced HOW-stun - and just one part of the acronym SOHO (South of Houston Street). Our end goal was a street that had two of Kate's favourite shops on it.

Linda Pagan's The Hat Shop - This store has been a part of the NYC scene for 20 years. The owner used to work on Wall Street but walked away to pursue her passion.  I was excited from the minute I looked at the window display.  As it was Easter this weekend, the focus of many hats followed this theme.  We were fortunate that Linda was in the store and had a little time to chat with us, sharing a bit of her history and about all the hats displayed. Turns out there were several designers represented, each with their own unique aesthetic.

Linda shared a book with us that she has a featured chapter in - An Englishman in New York by Jason Bell (Photographer) & Zoe Heller (Introduction). I definitely need to order a copy.  Want to know more?  Check out this great YouTube video.


Jillian Kaufman's Archerie - This is the designer Kate is doing her current internship with. Jillian is self-taught and has been in the industry for over 25 years. Her label -  Archerie - is designed for women of all figures and ages They are clothes to be lived in. She shares, “For me it is the craft and the richness of the fabrics in which we wrap ourselves. As we travel through our lives our clothes become a language with which we define ourselves and our experiences."

We were fortunate that Jillian was in the store that day as well, so we had a chance to talk with her about fashion, her collections (I really loved the purple dress with unique neckline) and feminism. Yup feminism. In fact I bought a small book in her shop called We Should All be Feminists by Chimamanda Ngozi Adichie. I thought I took images here, but in my excitement obviously forgot. SO, I snagged some S/S 17 images from her website.  Best of all - she decided to be the model for this season's collection. LOVE IT! 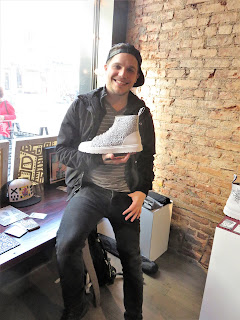 After being inspired by both of these incredibly talented and unique artists, it was getting time to start thinking about supper. The three of us picked up Kate's mum at a Greek coffee shop where she was waiting and headed over to PARM.  I enjoy watching a show called Unique Eats. Parm had been featured on one of their episodes. I was intrigued and fortunately everyone else was game.  It's a small casual Italian restaurant and sandwich shop with several locations. We headed off to the one in Little Italy on Mulberry Street.

As always, when walking the streets of NYC, slow down and look around. You never know what you'll see or what new experiences await.  On the way to Parm, we walked by a Dr. Martens Store. The doors were propped open, the space was packed with people and high energy music was playing. There was food.  In the window we noticed an artist drawing on a pair of white shoes.  First we walked by. Then we turned around, walked back and stepped in to see what was going on.

The store was having a special event evening.  There were tacos from Ola Viva Bar, beer from Old Blue Last and artist Rob Anderson was up front offering free customization with any purchase.  He had a permanent marker and was creating unique lined shapes as he talked, working until every last inch of the shoe was covered.  WOW! If we didn't have a destination in mind, we would have hung out here for a few hours.

A few short blocks later we found PARM.  We were just ahead of the crowd, so had no trouble snagging a table. 40 minutes later the place was crowded. Unique Eats featured the eatery's classic parm sandwich so I definitely had to try that. There were several options to choose from. I decided on the chicken parm. Even though I chose the smaller roll version, it was still incredibly filling with two big pieces of chicken tucked in. Kate and her mother shared a platter of some kind. Randi had the Eggplant Parm (not a sandwich). We all shared the spicy Buffalo Cucumber starter. You can check out the menu for this location HERE.