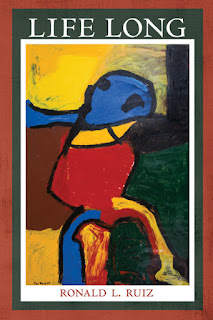 "To be fleeing cops and bad guys is scary enough, but imagine, as novelist Ruiz…does, that you’re also schizophrenic—and on the run, as it were, from yourself."  - KIRKUS REVIEWS

Ray Lopez is on the run with a duffel bag full of cash. Both drug dealers and the police are after him. But Ray is not a criminal. His last brush with the law was over traffic tickets. Recently released from the hospital with a diagnosis of schizophrenia, he is haunted by voices, auditory hallucinations, that frighten him and cause him to question his every move.

Ray’s journey from California to Laredo is perilous. Like so many Americans before him, he travels through unfamiliar territory with no clear way of knowing who will help and who will harm him. And he may well find himself on the wrong side of the border with a mind that has no borders.

Review -
​
This was an interesting book to read. In it we follow Ray, a schizophrenic, who ends up on the run carrying a bag full of cash stolen from some scary people. Not something he planned, it just developed by accident.

Ray rides buses over the coming days surrounded by other poor, trying to reach a safe haven and struggling not to stand out in the crowd, His drugs to control the voices are running low. He tries to blend in as he could be so easy preyed upon, but his schizophrenia and the fear of capture often make that impossible. Surprisingly, many along the way who could take advantage of him choose instead to give him sound advice.

Author Ronald L. Ruiz offers strong, solid characters and an unusual story line blended with a unique journey into the mind of someone mentally ill. How might they move through difficult challenges that take them out of their comfort zone? Here is one possibility.
​
Buy the Book:
Amazon ~ Barnes & Noble ~ Kobo ~ AbeBooksIndieBound ~ BookDepository
Add to Goodreads
​
Meet the Author -