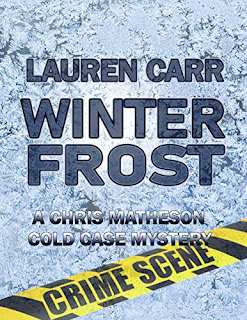 It all started with a chance encounter in
the city with Blair, his late wife.


Synopsis -
Chris Matheson and the Geezer Squad, working under the guise of a book club, dig into the events surrounding his late wife’s supposed death halfway around the globe. A state department employee shoots himself in the back three times. A CIA operative goes missing. A woman is targeted by an international assassin three years after being declared dead in a terrorist attack overseas.

Nothing is as it seems.

In his most personal cold case, Chris fights to uncover why the state department told him that Blair, the mother of his children, had been killed when she was alive. What had she uncovered that has made her a target? Who terrified her so much that she had gone into hiding and why are they now after him?
Review -

I guess I'm a Lauren Carr super fan as I've read all 25 of her books! So I was really excited to crack open Winter Frost - the latest addition to her Chris Matheson series.  As always, it was a wonderful read that I dove into eagerly and had trouble putting down.

Like the stories in her Mac Faraday, Twofer Murder, Lovers In Crime and Thorny Rose series, Carr imbues the Chris Matheson novels with strong storylines; murder; mayhem; mystery; great characters; strong, intelligent men: equally strong and intelligent women; a touch of humour; a good dash of danger; and best of all, several fabulous pets that each have their own unique personality.

Winter Frost starts with a totally unique plot twist that made me sit up and say what? - a random meeting on the street between Chris Matheson and his deceased wife who was buried several years ago. He bumps into her on the street, tries to follow as she flees, saves her life from a high end assassin, and then watches powerlessly as she jumps on a subway and disappears again.

What follows is a wild ride as we follow what happens to Chris after seeing his wife including assassins hot on his trail, the Geezer Squad (a real fav of mine) stepping in to help, learning the secret of where his wife has been the last 3 years, a threat to the safety of his mother and three daughters and an attempt to thwart and expose dangerous traitors. Touches of humour are added to lighten the mood here and there including the antics of Sterling - a super smart, card counting (yes he wins at cards), hat and sunglass wearing dog with attitude - and a super intelligent computer entity named Nigel. And I love that there are characters from her other series making appearances in this story.

Want to know how Chris' wife could be alive after being buried three years ago or who the Geezer Squad is or how they brought down the traitors?  I'm not telling! 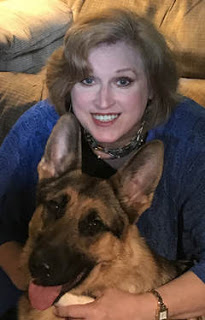 Now, Lauren has added one more hit series to her list with the Chris Matheson Cold Case Mysteries. Set in the quaint West Virginia town of Harpers Ferry, Ice introduces Chris Matheson, a retired FBI agent, who joins forces with other law enforcement retirees to heat up those cold cases that keep them up at night.Book reviewers and readers alike rave about how Lauren Carr’s seamlessly crosses genres to include mystery, suspense, crime fiction, police procedurals, romance, and humor.

​Lauren is a popular speaker who has made appearances at schools, youth groups, and on author panels at conventions. She lives with her husband, and three dogs on a mountain in Harpers Ferry, WV.​