The Naming Game (The Company Files Book 2) by Gabriel Valjan 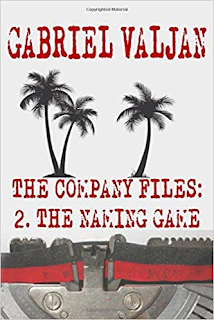 A brilliant script doctor is murdered.


A CIA officer is investigating the case.
Everyone is trying to survive the naming game.


Jack Marshall, a CIA officer, was really hoping to enjoy his vacation from work in DC and to spend some time in Malibu with his family, but a call from the LAPD’s Chief William Parker changed everything. Not only was script writer Charles Loew murdered, Jack has reason to believe FBI Director J. Edgar Hoover was somehow connected to the homicide.

In post-war Hollywood, everyone lies for a living but with Senator Joe McCarthy’s hunting for Communists, even one harmless secret has the power to destroy lives. With the help of his subordinates, Walker and Leslie, they investigate the case for Jack, and quickly enter the world of Hollywood scandals and blacklisted writers, which may prove more dangerous than fighting Nazis. When Jack’s own family is threatened, time is running out.

The second book in The Company Files series, The Naming Game is a historical noir that draws you into the familiar world of Hollywood names and reveals secrets from a forgotten era of Los Angeles history you never knew existed.

I first was exposed to author Gabriel Valjan's writing through his Roma series and became an instant fan. I love a reading a good thriller/mystery, so was intrigued when he launched his new series - The Company Files.  The first book was set in post war Germany and offered an intriguing mix of politics, history spies, subterfuge and of course murder.  I was curious where he would take this series in book 2.

For The Naming Game, the main characters have returned to the US and become embroiled in what lies behind the murder of a Hollywood scriptwriter. It is set during the reign of McCarthyism, a crazy time where parts of the government were radical about finding communists. Those working in Hollywood found themselves particular targets.  Many were blacklisted and unable to work openly. Fellow workers turned on each other to climb the ladder.

Jack again pulls in agents Walker (inserted as a scriptwriter)and Leslie (inserted as a receptionist to a psychiatrist) to start following the threads and see where they lead. We meet a wide range of intriguing characters along the way and are often left guessing as to who has secrets relevant to the case. The mystery behind the the increasing body count is slowly revealed - the element of danger always present.  Along the way the reader gets a great historical look into the inner workings of Old Hollywood.

Gabriel Valjan is the author of the Roma Series and The Company Files from Winter Goose Publishing as well as numerous short stories. He lives in Boston, Massachusetts, where he enjoys the local restaurants, and his two cats, Squeak and Squawk, keep him honest to the story on the screen.