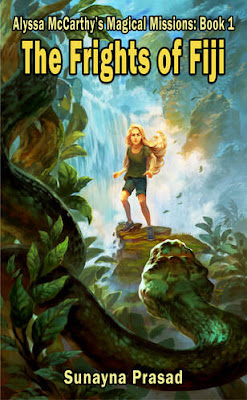 A world of magic and adventure awaits...

Sent to live with her strict, aloof, and uncaring uncle after her parents are killed in a car accident, twelve-year-old orphan Alyssa McCarthy longs for the life she used to have—one filled with fun and love. Then one stormy night, a message appears in the raindrops on the window that will change everything.

"Your life will never be the same again, as magic will interfere."

Before long, Alyssa is kidnapped by Master Beau, a banished sorcerer with a mysterious connection to her who can only regain his power by weakening hers. Suddenly hurled into a world of wizardry filled with fantastical beasts and marvelous technology beyond her wildest imagination, Alyssa must defeat Master Beau if she ever wants to get home again. But Master Beau will stop at nothing, including using Alyssa’s friends, to ensure he is triumphant.

Originally titled "From Frights to Flaws", this story is the exciting and enchanting first book in the "Magical Missions" series.

Sunayna Prasad's first book in her Alyssa McCarthy's fantasy series for young adults offers many things that these readers with find appealing.  Magic, magicians, a parallel world where they reside that the world doesn't know about, a teen being drawn into situations outside her control, adults that are inflexible and don't believe her and, in the end, she comes out on top.  Add in some modern technology that has twist in the magical world and you get the idea.

In the frights of Fiji, an evil magician wants to cause harm to Alyssa to gain benefits for himself.  She is introduced to the magic world and taken away to Fiji where she has to overcome his continuous attacks on her life and those trying to save her. Strange creatures abound - both good and evil.  I think pre-tween readers a bit of ahead of the curve as well as tween readers will enjoy reading this story.

Prasad clearly has talent, great ideas and a love of writing.  As an avid reader of fantasy and scifi, the one criticism I have of this book is I feel there wasn't enough time spent in the creation of this world nor clear rules of magic laid out before the author started writing.  There are a bit too many unnecessary details thrown in that interrupt the flow of the story line, a lot of distracting asides (especially about magic devices), last minute saves by beings we haven't met before and rules of magic that often feel like they were created as she wrote to fit a scene or get past a difficult point, rather than arising naturally from what she's introduced leading up to this point.

Again, I think younger readers will enjoy this book, especially the magic and the way she portrays Alyssa's interactions with adults. And I look forward to seeing more of Prasad's work as she grows and matures as a writer. 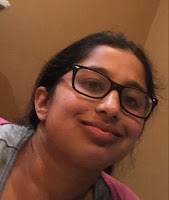 Sunayna Prasad enjoys writing fantasy books for children, as well as cooking, creating artwork, watching online videos, and blogging. She has also written The Frights of Fiji, formerly titled as From Frights to Flaws. She is passionate about modern life, fantasy, and world-building. Aside from her website, she also has a blog about different creative and entertaining topics, including fiction and writing, called “Sunayna Prasad’s Blog”.

Sunayna has graduated from college in May 2017. She lives in Long Island, NY.
Connect with the Author:   website ~ twitter