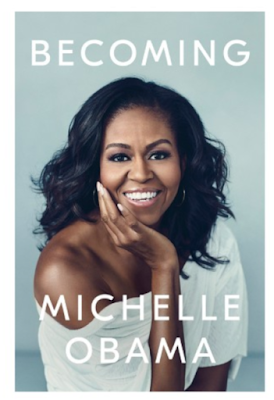 IN A LIFE filled with meaning and accomplishment, Michelle Obama has emerged as one of the most iconic and compelling women of our era.

As First Lady of the United States of America—the first African American to serve in that role—she helped create the most welcoming and inclusive White House in history, while also establishing herself as a powerful advocate for women and girls in the U.S. and around the world, dramatically changing the ways that families pursue healthier and more active lives, and standing with her husband as he led America through some of its most harrowing moments. Along the way, she showed us a few dance moves, crushed Carpool Karaoke, and raised two down-to-earth daughters under an unforgiving media glare.

In her memoir, a work of deep reflection and mesmerizing storytelling, Michelle Obama invites readers into her world, chronicling the experiences that have shaped her—from her childhood on the South Side of Chicago to her years as an executive balancing the demands of motherhood and work, to her time spent at the world’s most famous address. With unerring honesty and lively wit, she describes her triumphs and her disappointments, both public and private, telling her full story as she has lived it—in her own words and on her own terms. Warm, wise, and revelatory, Becoming is the deeply personal reckoning of a woman of soul and substance who has steadily defied expectations—and whose story inspires us to do the same.

I am always gun shy when it comes to celebrity memoirs. In fact, I often avoid them unless someone I know pushes me to give it a try. Becoming was no exception.  I delayed reading it time and time again. However, when I found her audio book available through my local library, I took a leap of faith and checked it out. I am so glad I did. It was life changing for me.
Respect to Michelle Obama for being truthful and honest about her life. This isn't just about her time campaigning and as first lady. Becoming is about her childhood, school years, parents, the positives of her upbringing, the difficulties of attending Princeton, the realities of student debt, what it was like to work first as a lawyer and then in non-profit, her passions, her experiences as a black person, mother and professional woman.  She shares the reality of how the demands of parenting fell mainly on her are bared and how it affected their relationship.
Her deep respect for Barack is revealed - his intelligence, his constant work to understand the world, his full commitment to her and to any job he embraced. She shares how hard it was to be the receiver devastating personal attacks, both while on the campaign trail and while as first lady, often untruths twisted from a single line taken out of context. We hear what it was was like to be in the White House - both public and private views - how she worked to keep her daughters lives as normal as possible, and the initiatives she championed while there. This really is a must read on so many levels. Well done!
As I explored this book on audio, I want to comment on that separately.  I was pleased they didn't hire a voice actor. Michelle voice was used throughout. That meant there were occasional times the sound of the voice recording changed a bit when she started recording again, and occasional times when she worked a bit too hard to enunciate. BUT overall it added 100% to the experience and those tiny imperfections made it very real. When she really got caught up in an important part of her story , her passion shone through.

SHOPPING IN THE U.S.