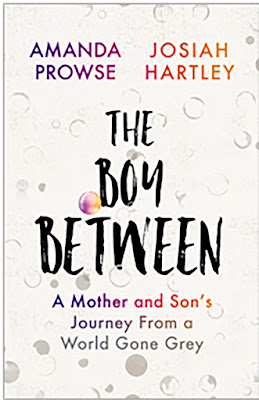 Josiah was nineteen with the world at his feet when things changed.
Synopsis -

Without warning, the new university student’s mental health deteriorated to the point that he planned his own death. His mother, bestselling author Amanda Prowse, found herself grappling for ways to help him, with no clear sense of where that could be found. This is the book they wish had been there for them during those dark times. Josiah’s situation is not unusual: the statistics on student mental health are terrifying. And he was not the only one suffering; his family was also hijacked by his illness, watching him struggle and fearing the day he might succeed in taking his life. In this book, Josiah and Amanda hope to give a voice to those who suffer, and to show them that help can be found. It is Josiah’s raw, at times bleak, sometimes humorous, but always honest account of what it is like to live with depression. It is Amanda’s heart-rending account of her pain at watching him suffer, speaking from the heart about a mother’s love for her child. For anyone with depression and anyone who loves someone with depression, Amanda and Josiah have a clear message—you are not alone, and there is hope.

This is an important book, but not an easy read for me as a mother. The synopsis is a bit misleading though. There were many signs slowly bubbling up that Josh (name used in book) was seriously struggling long before the crisis moment mentioned above.

The Boy Between does something very unique in the way this story is offered. It is written by mother Amanda Prowse and son Josiah Hartley, but instead of collaborating as they wrote a single dialogue - the events and how they are viewed are told by each person in their own words. You have chapters from Amanda alternated with chapters from Josh that follow the time line. It's shocking as a mother to read Josh's version of how Amanda's attempts to ease his suffering and "help" were actually viewed, things I probably would have tried in her situation.

The message that is presented clearly is that it is not his parent's "fault," nor is it their job find a way to make it all better. As well, it is not Josh's "fault." Serious depression is an illness, a very difficult illness, that doesn't have an easy fix. It is Josh's journey to explore what works and what doesn't. No one else can do it for him. No one else can know exactly the right path. What is needed is non-judgmental support, medical professionals who understand this illness who can explore a wide variety of treatments that might offer hope, unconditional love and a deep well of patience. Not easy for any parent. I know I would struggle. How does a parent deal with inevitable feelings that they must not have done something right if their child is suffering this much, and while dealing with them, not add to the load on their child's shoulders?
Full of insights and well written, I highly recommend The Boy Between.

Check out a great interview with Prowse HERE!

Amanda Prowse is an award winning international bestselling author best known for her contemporary fiction novels. A radio broadcaster and TV presenter renowned for her empathetic and emotional books, she is known in the UK as the 'Queen of family drama'. Her books have sold over 8 million copies in dozens of languages around the world.

Josiah (Josh) Hartley is the son of Amanda Prowse who has co-authored with his mother to tell the story of his journey through life so far. Born in the England, Josh was fortunate enough to attend one of the country's elite public schools from an early age and was awarded a place at one of the UK's top Universities where he planned to work towards a medical doctorate. But just at the moment when he should have been having the time of his life, he started feeling nagging tugs of self-doubt which spiralled into a depression during which time he planned his suicide. Luckily, his family intervened and after a roller coaster couple of years, he is alive and well and sharing his story to help other families who find themselves in the same position navigate their way through those difficult times.