Ditch the Pedestal - It's a Curse! 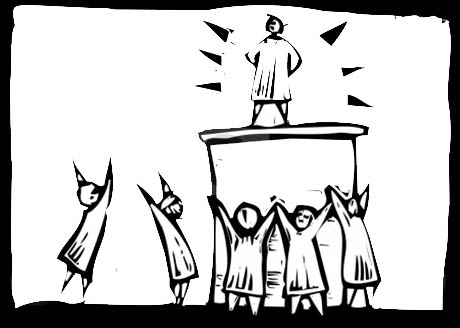 I've been thinking about the subject of pedestals for about a month now, playing around with how to approach the subject and what an interesting title might be. This morning the title landed like a bomb. That was the kick in the pants I needed.

When I literally leapt into writing by answering a Craigslist ad from a NYC fashion magazine, my life changed. I knew nothing about writing for magazines. I knew nothing about fashion - literally nothing at all. I grew up the daughter of a minister and low income. Hand me downs, K-Mart and sewing were my world. In this world, to focus on fashion/beauty was to be frivolous. Life was about service to others and being poor seemed to get you kudos.  Yet writing in the fashion world was the door that opened, so I embraced this opportunity with great abandon and no idea what I was doing. Eighteen months later, this led to becoming the co-owner of a local fashion magazine and that's where the craziness began.  Running a fashion magazine meant showing up events as a VIP, connecting with those wanting press, representing at fashion weeks - it was a new world that I truly didn't understand. Slowly people began to talk like I'd become "somebody." All I remember thinking was, "Seriously?" But it can go to your head.  Fortunately I had family around that always knocked me back down on my ass when needed. And it was occasionally needed.

Over time I became aware of a similarity between what I saw growing up and what I was seeing in this new world - the push to put people on pedestals.  In the religious environment, it happened all the time. As a minister's daughter I was all too aware of how many times this led to those who became idols falling off the pedestal in a very public and shaming way. Everyone is human, so the fact they made mistakes shouldn't have surprised anyone. But if you'd been put on a pedestal, you were not allowed to be human it seemed.

Because of my background, I was always really uncomfortable if anyone started to talk up my accomplishments too much.  I was one person. What I helped create was actually a huge group effort. Don't single me out PLEASE!  No one knew better than me that I wasn't perfect. I made and would continue to make tons of mistakes. I have a mouth that's not always connected to my brain and I definitely don't always think before I act. I have strong opinions.  From childhood I knew where being on a pedestal would eventually lead and had no desire to go there. It was a doomed path. 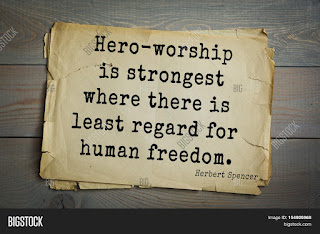 The downside was it made it hard for me to accept a compliment - scared me in fact - so I couldn't enjoy my achievements. It was also impossible for me to toot my own horn in a way that would advance my career. The upside was I wouldn't be standing on a pedestal when the public realized I was actually just a flawed human being working hard at something I loved. I could avoid the terrible fall. 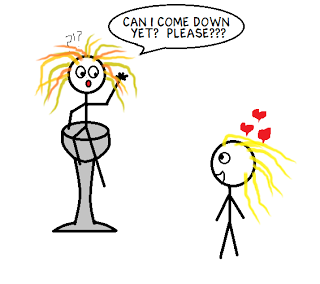 Why?  First because I wish these things were so common we didn't need to take notice. Secondly because society tends to take these people and put them on pedestals - and as I've said above, there is rarely a way to stay there without getting knocked around a bit.

I also find those who fall outside the classic societal expectations are pushed to be role models for an entire group. What stupidity! No one is perfect and no two people are the same. Can a single woman represent all women?  A man? A classic family? Not a chance. So why would we take a single person or couple and expect them to carry this burden of representing an entire group society has labeled them a part of?

A father was out with his baby without his husband having a coffee when a thoughtless comment made by the waitress struck a nerve. He shared it on Facebook. There were tons of posts from friends about how great a representative he was for his community. My comment was simply - it's not your job. Your job is to be a good father and husband. You do NOT have to represent all gay couples with children. BAM! 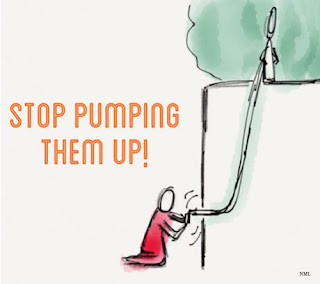 I have heard this same lament from people of all genders, ethnicities and religions. If it falls outside what North American society labels as the norm, every little aspect of what they do, how they act and what they say can be, and has been, used to make broad statements about the entire group mainstream society has labeled them a part of.  Ridiculous! That is a burden no one needs and it isn't fair.

We are all unique. We are all becoming.  We all do brilliant things worth celebrating. We all make mistakes that embarrass us. We get tired and say or do the wrong thing at the wrong time. We are all doing our best.  So let's toss the pedestals and labels out the door. Let's try to really see each person just as they are - accepting both their perfection and their flaws. No one should be placed on a pedestal. It's simply a curse.