More Than A Woman by Caitlan Moran (Audio book review) 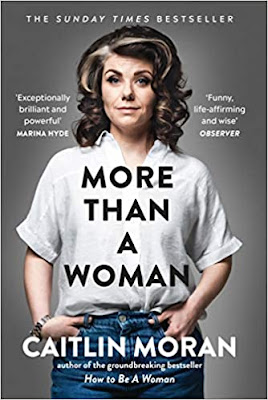 'More Than a Woman examines middle age, motherhood, sex and, of course, feminism all with Moran's signature wit'  - The Evening Standard

A decade ago, Caitlin Moran thought she had it all figured out. Her instant bestseller How to Be a Woman was a game-changing take on feminism, the patriarchy, and the general 'hoo-ha' of becoming a woman. Back then, she firmly believed 'the difficult bit' was over, and her forties were going to be a doddle.
If only she had known: when middle age arrives, a whole new bunch of tough questions need answering. Why isn't there such a thing as a 'Mum Bod'? How did sex get boring? What are men really thinking? Where did all that stuff in the kitchen drawers come from? Can feminists have Botox? Why has wine turned against you? How can you tell the difference between a Teenage Micro-Breakdown, and The Real Thing? Has feminism gone too far? And, as always, WHO'S LOOKING AFTER THE CHILDREN?

Now with ageing parents, teenage daughters, a bigger bum and a To-Do list without end, Caitlin Moran is back with More Than A Woman: a guide to growing older, a manifesto for change, and a celebration of all those middle-aged women who keep the world turning.

I listened to More Than a Woman as an audio book and highly recommend it. The author has a brilliant reading style that kept me glued to her story. Her voice comes through in the audio in a very real way, and that adds a very special element to the book.  After listening to it, I may buy a print copy as well as there are things I want to highlight. I want to be able to skim back through the book when needed to find specific quotes. But for the first time through - definitely listen to it as an audio book.
While this book is humorous, especially in the first half - later in the book Moran begins to share ideas she is passionate about in a more serious way. These are tucked in between other comedic moments, but I love that they are there.  I had to listen to her section about women and beauty a couple times. You are the BEHOLDER is my new motto.  I found myself wanting to shout DAMN RIGHT when she talked about how women are often publicly and brutally shamed and judged on social media in a way men never are. And there were tears when she talked about her daughter's struggle with an eating disorder.
This is a book by a woman, written to empower women.  It's a chance to look at the absurdity of expectations placed on us, often with our consent. And I love that she spent one chapter acknowledging men and the difficulties they faced. The picture she painted was one I had not realized, but it was so very true and so very sad.
Great book! Funny, serious, thoughtful, hilarious and full of truth!
Available for purchase on Amazon, Kobo, Audible, Abebooks, Alibris, Indigo & WorldCat 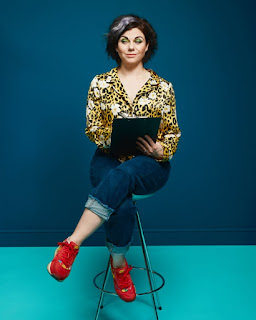 Caitlin Moran is the eldest of eight children, home-educated on a council estate in Wolverhampton, believing that if she were very good and worked very hard, she might one day evolve into Bill Murray. She published a children’s novel, The Chronicles of Narmo, at the age of 16, and became a columnist at The Times at 18. She has gone on to be named Columnist of the Year six times. At one point, she was also Interviewer and Critic of the Year - which is good going for someone who still regularly mistypes ‘the’ as ‘hte’.
Her multi-award-winning bestseller How to Be a Woman has been published in 28 countries, and won the British Book Awards’ Book of the Year 2011. Her two volumes of collected journalism, Moranthology and Moranifesto, were Sunday Times bestsellers, and her novel, How to Build a Girl, debuted at Number One, and is currently being adapted as a movie. She co-wrote two series of the Rose d’Or-winning Channel 4 sitcom Raised by Wolves with her sister, Caroline. Caitlin lives on Twitter with her husband and two children, where she spends her time tweeting either about civil rights issues, or that picture of Bruce Springsteen when he was 23, and has his top off. She would like to be remembered as ‘a very sexual humanitarian’.
= = = =
Love this letter from the author on her website -
"Hello you blokes,

(Which I use here as a non-gender specific greeting, as one of the things on my To Do List for 2020 is “make the word ‘blokes’ unisex”. It’s good to have a side-hustle.)

I hope you’re staying well in all this current Hassle. I’m squeaking with excitement to be able to tell you about my new book, More Than a Woman, which is coming out on 3rd September 2020.

Back when I finished writing How to Be a Woman a decade ago, I truly thought I had it all figured out. I thought I had vanquished the patriarchy in my mind, and nailed the general ‘hoo-ha’ of becoming a woman.

I firmly believed ‘the difficult bit’ was over, and my forties were going to be a doddle.

If only I’d known: when middle age arrives, a whole new bunch of tough questions need answering. Why isn’t there such a thing as a ‘Mum Bod’? How did sex get boring? What are men really thinking? Can feminists have Botox? Why has wine turned against me? How can you tell the difference between a Teenage Micro-Breakdown, and The Real Thing? Has feminism gone too far? Where did all that stuff in the kitchen drawers come from? And, as always, WHO’S LOOKING AFTER THE CHILDREN?

So now I’m a middle-aged woman who truly has seen it all, and has an extra grey streak in her hair to prove it, I’m back to talk about what happens next. With ageing parents, teenage daughters, a bigger bum and a To-Do list without end, I give you More Than A Woman: a guide to growing older, a manifesto for change, and a celebration of all those middle-aged women who keep the world turning. If nothing else, I truly feel I have investigated the phenomenon of Inexplicably Loud Male Sneezing to a forensic degree. WHY is it so loud? WHY? *starts crying* THEY HAVE EXACTLY THE SAME OLFACTORY SYTEM AS US. IT DOESN’T MAKE SENSE.

I truly hope you love it.