The Case of the Missing Glass Eye 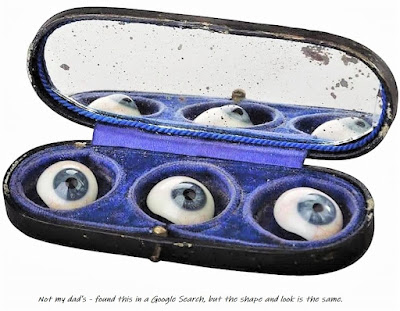 I don't seem to have a great memory when it comes to my childhood. I wasn't a happy kid. I struggled to fit in the box expected of a young girl at that time. It was a small town in the the Midwest in the late 50's/early 60's and my dad was a minister, so you can imagine. However there are a few that have stayed strong over the years. What I am calling The Case of the Missing Glass Eye is one.
Curiosity is a strong part of my genetic makeup. When it came to people, I was considered nosy.  When it arose in other areas, it was tolerated. I quickly lost interest in things and was always looking for something new. If left at home with little supervision, I would explore all the nooks and crannies of the house.  One day that led me to climb through a torn window screen onto a side porch and then up onto the roof. I was spotted, chastised, and the screen was repaired 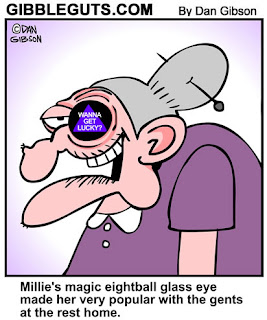 My favourite memory, however, came from exploring my parent's bedroom. I would go through their closet from top to bottom and play hidden in it's depths.  Under the bed and through the dresser drawers were also a target, but I never found anything great there.  I hit the motherlode, though, when I went through the drawers in their bedside stands.  I found my dad's glass eye!
A little backstory is needed here. When my dad was in his teens, he went fishing with some friends.  Unfortunately one of the friends was careless with his fishing gear and my dad ended up with a hook in his eye. Back then there was little they could do to save it.  So they deflated it and made a glass eye that would sit on top of it.  That gave the glass some movement, but it wasn't the same as a real eye. You can see the curve of the back in the image above.
Our dad's false eye was no secret to my brothers and I.  When we were misbehaving and dad got upset with us, that eye got a little bigger in a way that stopped us in our tracks.  I can't really say why, but when it happened we knew we had crossed the line in a serious way. This was especially true if he was driving long distances. He could turn his head and glare at us in the back seat without even slowing down. That eye and a fed up, "STOP THAT NOW!" always did the trick. 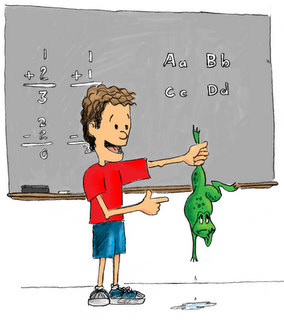 The day I found his eye in a little case I had a GREAT idea.  I was in grade school and they had show and tell once a week. I snuck the eye out of the house and took it to school where I hid it in my desk. When show and tell time came, I raised my hand to share. Grabbing the little box that looked a bit like a jewelry box, I walked confidently to the front of the class knowing my share would be the best. There I presented my treasure along with some sort of explanation.
I wish I could remember the teacher's and the students' reactions, but my memory stops there. My show and tell definitely was unexpected. True to form, once I'd shared, I lost all interest in that treasure. It no longer held any appeal. My curiosity drove me in a new direction. It was only when I arrived home I realized I had no idea where the eye was. I had lost it. Uh-oh!
Never once did I admit when young what I had done.  And it was such a relief that no one ever seemed to look for it or ask about it.  I dodged a bullet there. Somewhere in my 40's when my mum was up for a visit, I shared that story with her. She laughed. She never knew. I guess when my dad got a new eye - they had to be replaced every so many years - he put the old one away as a back up. Fortunately he never needed it.
To this day I still wonder where I left that small box holding a glass eye. Can you imagine another kid finding it and taking it home. "Look what I found mum."  Or would they have been freaked out and run away. Now THAT is a mystery, and one I will probably never have the answer to.
childhood childhoodmemory curiosity dodgedabullet elementaryschool falseeye family familymemory funny funnystory glasseye laugh Other school schoolmemory showandtell