Interview With Laura McHale Holland, Author of The Kiminee Dream I showed a facility for language in my youth, but it was for reciting poems and learning foreign languages, not writing. Counselors in high school encouraged me to become an interpreter and work someplace like the U.N., but by then, I'd lost both parents and was in a tailspin, hanging out with a wild crowd.

I dreamed of being a singer/songwriter but suffered way too much stage fright for that to ever come to pass. My sisters and I were never read to as children. We had a set of encyclopedias in the home, a few mildewed novels in the basement, and no children's books. We were encouraged to read only school assignments, which made reading seem like a chore to me. My escape was the outdoors—playing games with neighborhood children, running, biking, swimming.

It was while attending writing workshops at Columbia College in Chicago, which focused on recalling details from passages read aloud in class, that verbal and written language gelled for me, and my interest in writing sparked. Then it was a stop-start sort of venture for me until I finally made a commitment to complete my first book. Commitment to yourself and your craft makes all the difference.

The Kiminee Dream was inspired by my youth in Illinois. Born in Chicago, I was raised in the city until my family moved to a suburb when I was almost six. The interesting thing about suburbs back then was they were a kind of crossroads where country, suburban and city lives mingled and influenced one another. We regularly visited relatives who had lived their entire lives in the city, others who had resided in the country all their lives and some who'd been suburbanites for a long time. On our way here and there, we passed farm stands where we bought eggs and seasonal produce. The next day, we might drive the "expressway" to the heart of the city. I found that once you got past the superficial aspects of life, all of these people were very much the same in that they were rock-solid decent people, practical, with a huge capacity to care about others. I loved them all. They inspired many of the book's characters.

While Carly is the main character, you manage to seamlessly move between characters allowing a window into their worlds. What are the challenges to telling a story from more than one perspective? Are there any tips you can share with other authors who would like to try this?
The Kiminee Dream has an omniscient narrator, which doesn't seem to be popular these days, but I love the flexibility it affords. You can go way back for an almost panoramic view of things, like I do in the book's first chapter, or you can go in close and share what one person is experiencing, like I do, for example, in the chapter when Carly Mae's father is unjustly institutionalized. It is definitely challenging to balance the shifts so it all fits together and isn't jarring. I also like to use first person point of view in memoir and short fiction. I haven't tried first person in a novel yet, but I might someday.
How does the writing process work for you? Do you schedule a time every day, work madly when inspiration hits or ?

Right after waking most mornings, I feed our dogs (two Maltese-Shih Tzu mixes that don't look alike at all), make a pot of strong, black tea, and then write for up to 90 minutes, depending on when I wake up and what else I have to get done before I start work at my day-job. Lately, I tend to have one main project in the works, but I pull off of that from time to time to maybe write a short story, poem or even a short play. I used to wait for inspiration to hit but that didn't lead to consistent results. Now I show up as a matter of course and usually get good work done. Sometimes it's exhilarating, and then it's rally hard to stop.
As an author - what do you enjoy most about writing process? What feels like a chore?

There are points in the creative process where the words and ideas come together in ways that encompass what I envisioned and much more, taking things to a new level. It's like the subconscious comes in with a shimmering brush and gives the scenes a whole new sheen. Writing can feel like a chore when I'm under the weather and feeling like my voice doesn't matter. At those times, I just do what I can even if it's only a little bit.

You write everything from flash fiction, to novels, to memoirs, to short plays. Do you have a favorite form to write? Why?
Right now I'd say novel writing is my favorite form because creating such a work is akin to taking journey into a new land with surprising vistas, breathtaking curves, sumptuous meals and newfound friends. I have my own emotions as a creator rising. I also become deeply involved in the characters as they show up and evolve. And when I'm writing, ideas will just flash into my mind. Keeping up with them is akin to trying to hold mercury in my hands (toxicity aside). Deciding which of the ones I catch will work and which will have to wait for another time is a bit like working a puzzle. The whole process is immersive and highly satisfying.

When not writing, what do you do to relax? What types of books do YOU read? Do you have a favorite title you can share?

I hate to admit it but I turned into a real couch potato during the pandemic and stream way too much content on TV. Bridgerton? Loved it. The Handmaid's Tale? I'm deep into that now, too, for different reasons. The Underground Railroad? Slayed me. I do read a lot, too, though. And I like to read a variety of books. I just finished Cheryl Strayed's Tiny Beautiful Things and was floored by her wisdom. I've also recently read Elizabeth Gilbert's City of Girls and thought it was terrific. Gilbert is an amazing talent. Yaa Gyasi's Homegoing continues to be a favorite that I re-read from time to time, as does Chicago by Brian Doyle. And right now I'm reading, Wrong Way Home, a glorious short story collection by Mandy Hanes, who is another author who, like me, is independently published. 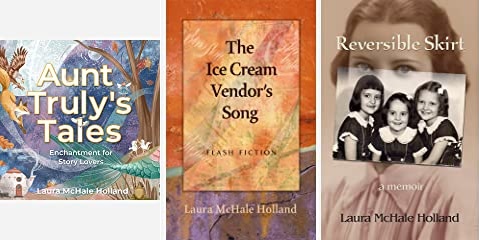 What do you have coming up in the next year? Any new books in the works?
I just released a collection of short stories inspired by Aunt Truly, a storytelling character in The Kiminee Dream. It's a fun, companion project to the novel. I'm also working on a new novel set in San Francisco in the mid-1970s. A few years ago, when I described to a young man how I arrived in that city with $200 to my name, banjo in hand, and found a little room for $79 per month in a Victorian flat shared with two other young women, he said it sounded like a fairy tale. And in some ways, it was. I'm trying to capture that magic, though the story doesn't follow my life at all beyond being set in San Francisco at that time.
connect with author: website ~ twitter ~ facebook ~ instagram ~ goodreads