In Order to Live: A North Korean Girl's Journey to Freedom by Yeonmi Park with Maryanne Vollers 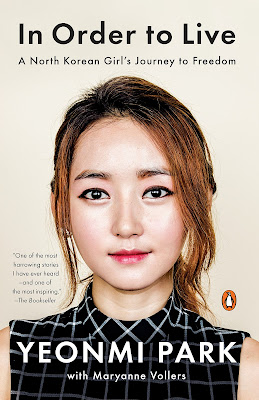 “I am most grateful for two things: that I was born in North Korea, and that I escaped from North Korea.” - Yeonmi Park
Synopsis -
In In Order to Live, Yeonmi Park shines a light not just into the darkest corners of life in North Korea, describing the deprivation and deception she endured and which millions of North Korean people continue to endure to this day, but also onto her own most painful and difficult memories. She tells with bravery and dignity for the first time the story of how she and her mother were betrayed and sold into sexual slavery in China and forced to suffer terrible psychological and physical hardship before they finally made their way to Seoul, South Korea—and to freedom.

Park confronts her past with a startling resilience. In spite of everything, she has never stopped being proud of where she is from, and never stopped striving for a better life. Indeed, today she is a human rights activist working determinedly to bring attention to the oppression taking place in her home country. Park’s testimony is heartbreaking and unimaginable, but never without hope. This is the human spirit at its most indomitable.
Review -
All I really knew about North Korea is what I read in North American newspapers over the years, in other words absolutely nothing about the reality of what it as like for the people living there.  Yeonmi Park made the brave decision to tell her story honestly and openly, especially what she had to do to survive in China, something she makes clear was difficult given her culture. However, telling it not only took the burden of carrying a secret away, it pulled back the curtain on the reality of women refugees. The face of that reality is human trafficking.
There were so many aha moments for me in this book. The author showed how the country indoctrinated their citizens so effectively, right from childhood.  There was only one reality given and one way to look at things. You were punished for independent thought or stray comments, seriously punished. The poverty, the hunger and the desperation were all laid out clearly.  When her mother and she fled to China, the slavery that took it's place was only better in that they were fed. With a shortage of girls, most were sold as wives, but had no legal status so they lived in fear - sometimes in very abusive situations.
After they finally escaped to South Korea, the prejudice and poverty were very real. What was most intriguing was how overwhelming Park found having to make constant decisions.  After having been brought up having all decisions made for you and then in China having your life defined by your captor completely, it was a skill they did not posses.  But once she began to understand freedom, there was no turning back. She stepped into the spotlight to become a advocate for those still in the grips of the traffickers.
I highly recommend this book. It is filled with a first hand look into a country that is hidden in secrecy as well as the reality of human trafficking and the prejudice refugees face.
Buy the book - Amazon ~ Audible ~ Barnes & Noble ~ Walmart eBooks ~ Apple Books ~ Google Play ~ Indigo
Meet the Author - 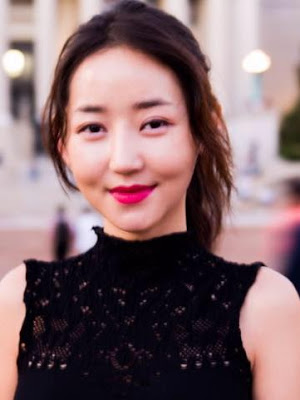 Park Yeon-mi (Korean: 박연미) is a North Korean defector and human rights activist who escaped from North Korea to China in 2007 and settled in South Korea in 2009, before moving to the United States in 2014. She came from an educated, politically connected family that turned to black market trading during North Korea's economic collapse in the 1990s. After her father was sent to a labor camp for smuggling, her family faced starvation. They fled to China, where Park and her mother fell into the hands of human traffickers and was sold into slavery before escaping to Mongolia. She is now an advocate for victims of human trafficking in China and works to promote human rights in North Korea and around the globe.

Park rose to global prominence after she delivered a speech at the One Young World 2014 Summit in Dublin, Ireland — an annual summit that gathers young people from around the world to develop solutions to global problems. Her speech, about her experience escaping from North Korea, received 50 million views in two days on YouTube and social media, with a current total of more than 80 million. Her memoir In Order to Live: A North Korean Girl's Journey to Freedom was published in September 2015.
Website - Instagram - Youtube - Twitter - Facebook
autobiography book bookreview books China History humantrafficking memoir nonfiction northkorea refugees review southkorea