Treana Peake and The Obakki Foundation - an update! 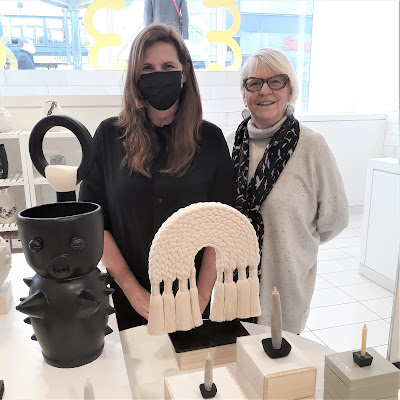 I have several friends that either live in downtown Vancouver or come from other parts of the city and meet me there. A long walk is always in order, especially on a nice day. Sometimes that walk is along the waterfront. Sometimes, especially with my friend Colleen, it's an exploration of events that are happening. Yesterday was one of those days.

Over the course of several hours we covered 8 K from Yaletown to the Pan Pacific and back with many stops along the way. One event notice she sent me struck a chord. It was for a Obakki Pop-Up shop at Nordstrom Pacific Centre running Feb. 11-13, 2022. The shop would offer a small selection of artisan-made products from around the globe curated with Valentine's day in mind including their new Obakki perfume, best-selling candle sets, one-of-a-kind vases, and more.
My mind was instantly taken back in time to 2010 when I was co-owner of a local magazine. I can't remember how I connected with Obakki, but I wanted to do an interview with founder Treana Peake for our magazine. I even set up a new category for it called Fashion Cares to give me more freedom when writing it up. At that time their main retail focus was a line of truly amazing, unique clothing. I am privileged to own several treasured pieces in my closet.

Paired with this was their brand's charity work in Africa. What she shared caught at my heart strings. Some of the fundraising came from their retail sales, but others came from unique projects like using the words of orphans they supported to create a t-shirt, making sure they saw the results and also understood how they were contributing. Women in villages they helped were given cameras to take pictures that showed who they were by taking pictures of their lives. These were blown up and sold at an art show. I loved how those benefitting were involved in the process. And I loved that the goal at every village the touched was to help them become self-sufficient.
I have followed, sometimes closely and sometimes from afar, as the retail brand adapted in response to a changing market, but had lost touch with their fundraising efforts. When Colleen and I stopped in to view the pop-up shop, I had no illusions that founder Treana Peake would actually be there in person. I just wanted to support Obakki by taking some photos and sharing. I was in for a surprise. Not only was she there, but when I explained who I was and how we met, she remembered.

I loved catching up. The Obakki Foundation has now expanded globally. They have connected with local artisans in each place and support them through selling their goods. Every single item sold in their pop-up shop has a story. When a piece is purchased, the customer is also given a card with the story of that artisan to take with them.

It gives me goosebumps to even write about that connection as I value the stories attached to each treasure I own. I didn't pick up anything in that moment as we had many miles of walking ahead. Instead I decided to visit their website when I was back home so I would have more time to ponder exactly which would be the perfect piece, the one that called my name.

Checking out their foundation website this morning -  www.obakkifoundation.org - I was astonished by the numbers. To date they have provided 3 million people with drinking water, given 20,000 children access to education and are currently partnered with 300 artisans. I highly suggest you read some of the wonderful stories they share on their front page, from beekeeping to pottery to sewing to drilling wells.

Next I headed over to the Obakki website - www.obakki.com/collections/home - where I found a huge array of goods to explore.  You can search by the artisan's country or by product genre - new, wall art, kitchen+dining, home textiles, pottery, jewelry, skincare, apparel+other, and gifts. I will be looking at each and every item before deciding which one is absolutely right for me.
Note - The pics I share here show only a little of what is in their on-line shop. You really need to check it out.
= = = =

Below is my very first article on Obakki written for Vancouver Fashion eZone in 2010. I became and instant fan.  Please remember this is old. For current information on both Obakki and the Obakki Foundation go to their websites listed above.

The Obakki Foundation - “Because.....”
by Marilyn R. Wilson

One of the first questions Treana Peake (owner/creative director of Obakki) answers in her blog is why she started the Obakki Foundation. “Because of the two-year-old orphan girl I met living on the streets of Romania, because of the baby that died of malaria one night when I was in Cameroon....” And the list goes on. Real stories of real people who touched her heart. Launched in November 2009, it has a strong focus on empowerment. “It's about giving people the opportunity to be creative – using thoughts, ideas, art and fashion to stand up and participate in improving the lives of those who need it most.”

Peake grew up with an innate passion for charity work. When travelling with husband, Nickelback guitarist Ryan Peake, she chose to step away from the glamour and explore impoverished areas. In her early 20's she helped develop her first charity, ICA, which has operated in Haiti, Romania, Jamaica and the Philippines. One day a man from Lewoh in Cameroon reached out to them and said, “My village needs help. Will you come and visit.” That initial trip brought home the need evident in all of Cameroon and ICA quickly established a presence. A year ago Peake asked the orphanages there to have the children answer three questions with words or drawings: What makes you happy? What makes you sad? What makes you afraid? Their answers provided the basis for an inspirational line of clothing and accessories that launched the Obakki Foundation's fund raising efforts. Included are a children's cotton t-shirt and dress, men's t-shirt, women's t-shirt, hoodie, canvas bag and silk scarf. On a trip to Cameroon last fall, the children were shown what had been created and given hoodies of their own. The message was brought home that they could have a hand in changing their own lives.

Each trip to Africa is a chance to launch a new campaign. The women of Cameroon are invisible in many ways, so on a recent visit the foundation took portrait pictures and then gave them each a disposable camera. The instructions were to take 24 pictures that showed who they were as women – mothers, caregivers, farmers, etc. The money raised from this project will go straight back to improving the lives of these women. For another campaign, children were asked to take Polaroid photographs of themselves which will be auctioned off in limited edition prints. Again, the funds go to improving the lives of the children involved. Peake hopes to do more than raise money with these projects. “I want to show there is poverty of course, but there is also life and energy and happiness. The beauty in Africa is really hopeful and inspiring...”

ICA and the Obakki Foundation are sister charities. ICA handles the field work and the Obakki Foundation is the umbrella fund raising agent. On the foundation's website you can purchase campaign clothing or chose to donate money, school kits and medical kits. Priorities in each area they visit include education, clean drinking water, medical needs and nutrition. Seven schools and three water projects have been completed with another eight or nine schools in the planning stages for next year. They have just finished a medical assessment to help develop a five year health plan for the region. As well, they are working in two orphanages and a school for the deaf. The ultimate goal for each village is to raise it to the level where it can become totally self-sufficient – something that has already happened in their first village, Lewoh.

When Peake first launched Obakki, the foundation was already an integral part of her future plans for the company. Unique in it's vision, “The Obakki Foundation is really about finding and nourishing creativity. It's going into these communities and finding outlets through art, dance, music and photography, then taking it back here and using it to raise money. It's giving people that platform to showcase their work and let them see that by sharing with us, they will be able to raise money for themselves.”