Interview with Matty Roberts, author of Child of the Etherclaw 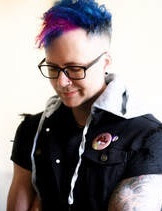 Can you share a bit about your journey to becoming a writer/published author? Was was writing a dream from childhood, or one that came at a later age?
Stories mean the world to me, whether they’re providing an escape, or the means to explore alternate possibilities. I’ve always enjoyed writing, but it wasn’t until my early twenties when I wrote a little fanfic (which will never see the light of day!) that I considered writing as something I might legitimately be able to do. Since then, I’ve written a number of short stories and several partial novels. While Child of Etherclaw is the first work that I felt fully confident in releasing, I have plenty more on the way.

This is your first published book and it's in the YA SciFi genre? What inspired you to move from journalism where you began to write this this story, in this genre, for this audience?

Sometimes life is less inspiration and more necessity. I had just started my career in journalism when the Great Recession hit and news organizations felt this hard. My newspaper completely shut down, and as a young journo noob, there was no place for me among the veterans who also needed jobs and had far more experience. I knew I had to change industries, so I went back to school and got into engineering. It’s great, but the drive to create never goes away. I don’t have any formal training in writing genre fiction, so I’ve spent years practicing, learning, refining, and taking to heart any and all feedback from peers and readers. It’s been a journey, but I feel that I’m still at the very beginning of it with the release of Child of Etherclaw.

Where did the inspiration Child of Etherclaw's story line come from? Where did the inspiration come from for the main characters that make it come alive?
Child of Etherclaw began as a short story exploring a rather radical approach to climate change mitigation—the Void Pillars. These are the massive hollow superstructures that reach into space and act as heat sinks that cool the planet. When I started to consider how they could be constructed, who (or what) could construct them, and why, that short story quickly took on a novel length. It also turned out to also be the perfect setting for several characters that had been banging around loudly in my head for years, demanding to be written about.
How much research on technical issues did this book require you to do?

Child of Etherclaw is very much soft sci-fi with a fantasy vibe, so I went a little easy on a lot of the technical accuracy. That said, I did apply a fair bit of my background and experience when discussing Fenlee’s engineering projects.
How does the writing process work for you? Do you schedule a time every day, work madly when inspiration hits or ?

Oh how I would love to be able to schedule a time each day. Unfortunately, life has other ideas, and I have to take advantage of writing whenever life grants me permission. Sometimes I’ll take a break from work and sneak a few minutes, or often I’ll wake up at 3 in the morning and instead of staring at the ceiling taking mental inventory of all my life’s regrets and embarrassing moments, I’ll grab my laptop and hammer out a few scenes.
As an author - what do you enjoy most about the writing process or comes easily to you? What feels most like a chore - a struggle?

I feel like characters come easily. I rough out who I want them to be, but once I start writing, they take on their own personalities and the dialog just flows. I’ve found myself rolling my eyes at my WIP from time to time after finishing a scene and mumbling out loud, “Really, Fenlee? Gotta make this harder on yourself, huh. Geez…”

I do find that I have a tendency to over-write dialog, so I end up shaving a lot down in subsequent drafts. This is challenging because by doing so, the story can lose valuable context. After cutting dialog, the process of going back through and ensuring everything still makes sense and later parts of the story don’t reference something I just cut tends to get a little messy. Not a fan.
What's next? Do you have anything new you are working on?  Will this book and it's characters become a series?
I’m making a great deal of progress on the second book in the Etherclaw series. The stakes increase dramatically, and Fenlee will have to do everything she can do overcome plenty of new challenges while coming to terms with certain secrets that will be revealed. Beyond Etherclaw, I have another sci-fantasy series I’ve been working on. I’m very excited about it, but it won’t receive my full attention until the Etherclaw books are complete.
connect with the author: website ~ twitter ~ instagram ~ goodreads
author authorinterview interview ireadbooktours People Scifi scifiauthor YAauthor YAfiction YAnovel