Tomorrow Will Be Different: Love, Loss, and the Fight for Trans Equality by Sarah McBride 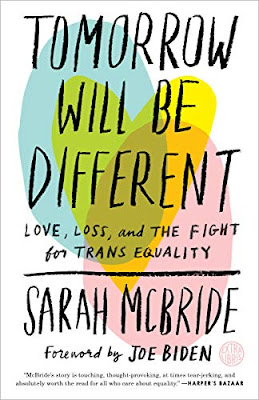 The fight for equality and freedom has only just begun.
Synopsis -

Before she became the first transgender person to speak at a national political convention in 2016 at the age of twenty-six, Sarah McBride struggled with the decision to come out—not just to her family but to the students of American University, where she was serving as student body president. She’d known she was a girl from her earliest memories, but it wasn’t until the Facebook post announcing her truth went viral that she realized just how much impact her story could have on the country.

Four years later, McBride was one of the nation’s most prominent transgender activists, walking the halls of the White House, advocating inclusive legislation, and addressing the country in the midst of a heated presidential election. She had also found her first love and future husband, Andy, a trans man and fellow activist, who complemented her in every way . . . until cancer tragically intervened.

Informative, heartbreaking, and profoundly empowering, Tomorrow Will Be Different is McBride’s story of love and loss and a powerful entry point into the LGBTQ community’s battle for equal rights and what it means to be openly transgender. From issues like bathroom access to health care to gender in America, McBride weaves the important political and cultural milestones into a personal journey that will open hearts and change minds.

Review -
It is a priority for me to embrace work from as wide of a variety of authors as possible, especially when it comes to non-fiction in general, and memoirs specifically.  These books help me develop a greater understanding of what other's lives and challenges are like. Such is the case with Tomorrow Will Be Different.
McBride stands firm as a strong advocate for equal rights for all, and works hard on Trans issues specifically as she herself (and her now deceased husband) is a proud member of the Trans community.  Throughout this book she notes how lucky she personally has been. When she chose to embrace her truth and publicly announced her transgender status at the end of her year as university student body president, she overall received strong support from family, political connections and even from a few frat brothers.  Shortly after transitioning she began an internship at the Whitehouse.
That doesn't mean the road was easy.  Her memoir shares her path from first coming out, to finding love, to working within the political system to end discrimination, to dealing with personal loss of her husband to cancer, to attacks on social media where she was encouraged to kill herself, to the frustration over all the hard won progress lost with the election of Trump, to being chosen to speak at the Democratic convention. What an incredible story.
This book allows reader ps to walk by her side through her journey of love and commitment to change, and to be privy to her thoughts during those moments.  You will get a glimpse into how the political machine works and the egos that undermine it. And it will bring a readers a greater understanding of trans issues. I highly recommend it.
Buy the book: Amazon CA ~ Amazon US ~ AbeBooks ~ Kobo ~ Audible ~ Indigo.ca
Meet the Author - 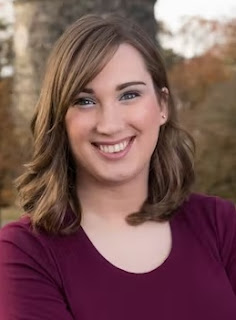 Sarah McBride is the National Press Secretary for the Human Rights Campaign and the author of "Tomorrow Will Be Different: Love, Loss, and the Fight for Trans Equality."

In 2012, Sarah made national headlines when she came out as transgender while serving as student body president at American University. A native of Wilmington, Delaware, Sarah serves on the Board of Directors of Equality Delaware and helped lead the successful effort to add gender identity and expression to her state’s nondiscrimination laws. In 2008, Sarah worked for Governor Jack Markell (D-DE) and, in 2010, for former Attorney General Beau Biden (D-DE). Prior to coming to HRC, Sarah worked at the Center for American Progress and interned at the White House, the first out trans woman to do so.