I was born and raised in Caledon, Ontario; however, as the only child to a single parent, I commuted daily to a private elementary school in Toronto, just down the road from my mother's real estate office. That was until my parents officially divorced, and I was sent to a Catholic high school in Caledon East. I am not Catholic; however, my mother liked uniforms and this school was more reasonably priced with transportation included. Considering my elementary education had been accelerated, I skipped a grade in high school, which also made making new friends challenging, since being a "brainer" is not very cool. After joining a number of clubs (student council, improv, etc)., I soon began making more friends, and funny enough, I actually met my future husband at the bus stop my very first day of high school, so I guess everything happens for a reason.


How did you become involved in fashion/photography?

I had always excelled in the arts, but it was not until I took a photography course in high school, that I found my true calling! I received the top mark in the class, and decided to pursue photography further in post secondary, first at Humber College ITAL where I obtained my Honours Diploma in Creative Photography in 2003, then I returned to complete my degree in Honours Media Studies at the University of Guelph Humber in 2008.


Photography and media is my current career, and VALT is currently my biggest project. Kat Eye Imaging is the company I launched in 2004, which specializes in all areas of commercial photography and imaging enhancement.

I believe you were involved in the Toronto Alternative Fashion Week. How did you become involved and what about this type of fashion week inspired you?

Kat Ferneyhough was a fashion designer featured at FAT since its inaugural year, and every year, I attended to shoot her collection. We both felt this was an amazing event, and were very surprised there was not a similar event in Vancouver, so we seized the opportunity!


I first visited BC in April 2004 with Kat Ferneyhough and a couple other friends. I had actually applied to UBC for geochemistry that year, so I was mainly here to tour the campus. Although life had other plans for me, I vowed to myself I would return to live here one day. I returned in 2005, to photograph one of Kat's fashion show in Victoria, and finally returned again 2011 with my husband to sway him into moving here - it was not very hard.

My husband and I officially moved to BC in May 2012. We drove across the country with a 5x8 trailer in tow, with the intention of testing out BC for minimum 1 year, as we were renting out our property in Ontario on a trial basis. We first lived on Mayne Island, enjoying a break from our computer focused careers and working at the Bennett Bay Bistro for the summer. In September 2012, we moved to Vancouver's West End, where we currently reside.


Talk about the journey to conceive and launch VALT last year? What are the biggest challenges?

I have previous event experience through working with Caledon Arts and Crafts for Youth (CACY - now simply known as Caledon Arts). I was their board Secretary, and annual Arts Show Coordinator for a couple of years. Through CACY, I also had the opportunity to be part of the planning committee for the annual Caledon Day event, which provided me with the experience of working with the Town of Caledon directly and all the logistics/bureaucracy that comes with public events.

Kat Ferneyhough approached me regarding becoming her partner in launching VALT , and although in hindsight I may not have had all the experience needed, I accepted the challenge, and the rest is history. Kat and I both strongly believe teamwork is essential to our success, and we are endlessly thankful to all the amazing people who have supported us and joined us on this journey. 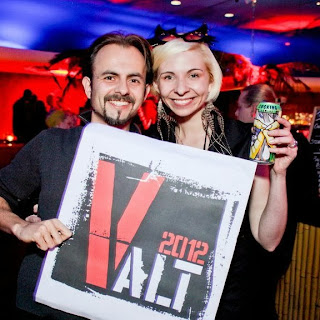 Balancing my life and VALT  can be very challenging, and I am still trying to figure it all out. The biggest hurdle this year was the death of my mother, and as the only child, all the responsibilities that came with handling her estate, etc. My mother had been battling cancer on and off for over a decade, but was very independent and supported my decision to move to Vancouver to launch VALT.  Immediately following VALT last year, I had to return to Ontario as her health had taken a turn for the worse, and I made it back just in time to spend her last 5 weeks with her. I am still dealing with all the stages of grief at different times; however, VALT provides the demanding creative outlet I need to focus my positive energy on. Every year, I will only work harder to make this event even more amazing in honour of my mother.

My favourite part of this event, is the shock and awe on attendees faces when they see something they did not expect. Therefore, I feel the best example of this last year was the finale of Mitmunk's collection, featuring two women walking down the runway wearing gas masks and bodysuits depicting male and female genitalia. Moments like this is what really sets us apart from other fashion weeks. Another important memory from #VALT2012 personal to me is the dresses I wore each night, actually belonged to my mother, who happened to be a very fashionable lady back in the day.

For information on attending Valt 2014 will have the opening gala on Nov. 20th and shows on Nov. 21-23. For more information go to www.valt.ca. To purchase tix go to http://www.valt.ca/attend/tickets/#.VFvANPmop7M

While the image below is not from VALT 2012, it is such a wonderful picture of these two friends and partners I just had to include.  Kudos on all their hard work!  Hope to see you there. 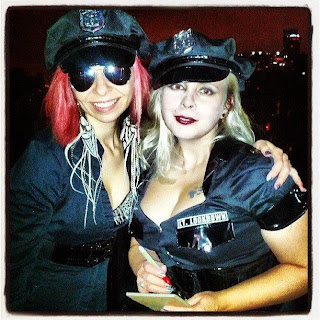