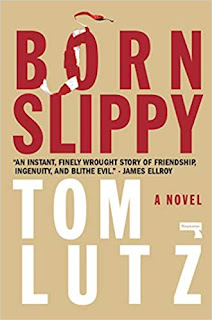 A provocative, globe-trotting, time-shifting novel about the seductions of -- and resistance to -- toxic masculinity.

"Frank knew as well as anyone how stories start and how they end. This fiery mess, or something like it, was bound to happen. He had been expecting it for years."

Frank Baltimore is a bit of a loser, struggling by as a carpenter and handyman in rural New England when he gets his big break, building a mansion in the executive suburbs of Hartford. One of his workers is a charismatic eighteen-year-old kid from Liverpool, Dmitry, in the US in the summer before university. Dmitry is a charming sociopath, who develops a fascination with his autodidactic philosopher boss, perhaps thinking that, if he could figure out what made Frank tick, he could be less of a pig. Dmitry heads to Asia and makes a neo-imperialist fortune, with a trail of corpses in his wake. When Dmitry's office building in Taipei explodes in an enormous fireball, Frank heads to Asia, falls in love with Dmitry's wife, and things go from bad to worse.

Combining the best elements of literary thriller, noir and political satire, Born Slippy is a darkly comic and honest meditation on modern life under global capitalism.

If asked to describe this book in one word I'd have to say "interesting."

From the first chapter onward, I just wasn't sure what I thought of the two main characters and their connection.  On one hand you have a basically lovable, regular guy - Frank - who works with his hands building homes and tries to do what is right as he stumbles through life.  Opposite him is Dmitry - libertine, amoral, self-centred, sexual swinger with wide tastes, unfaithful, questionable business practices........and the list goes on.  Yet these two characters seem to be bound together in some unfathomable way.

From their first meeting when Dmitry worked for Frank building a house, over and over and over again, through countless scenarios, Dmitry brings chaos and problems into Frank's life. Yet Frank continues to have a soft spot for him, to feel he is responsible for this man in some way - his moral compass.  Frank even says yes to applying for a passport and sending it to Dmitri so financial accounts can be set up in his name.  NO NO NO NO NO! How can Frank be that naive?

Born Slippy moves smoothly back and forth in time from present to past and back. We follow the life of Frank, both on his own and during the unsettling times that Dmitri appears. I found myself continually trying to figure out what drew Frank to Dmitri, and what drew Dmitri to Frank. They seem to have nothing in common, but their paths continue to intersect regularly over time. This journey will challenge Frank to his core and lead him down unexpected paths.

Born Slippy offers a complex, intriguing storyline while weaving in opposing views on the themes of morality, sexuality and friendship. 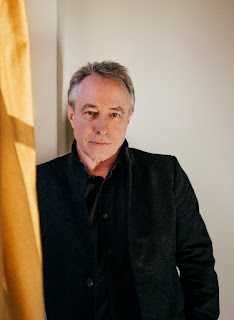 Tom Lutz is a writer of books, articles, and screenplays, the founder of the Los Angeles Review of Books, and is now Distinguished Professor at UC Riverside. His books include American Book Award winner Doing Nothing, New York Times notable books Crying and American Nervousness, 1903, the travel books And the Monkey Learned Nothing and Drinking Mare’s Milk on the Roof of the World, and published on January 14, 2020, Born Slippy: A Novel.

He has written for television and film, and appeared in scores of national and international newspapers, magazines, academic journals, and edited collections. He is working with a Los Angeles-based production company on a television show set in the 1920s, is finishing a third collection of travel pieces, a book on the 1920s (The Modern Surface), and is in the early stages of a book on global conflict along the aridity line.