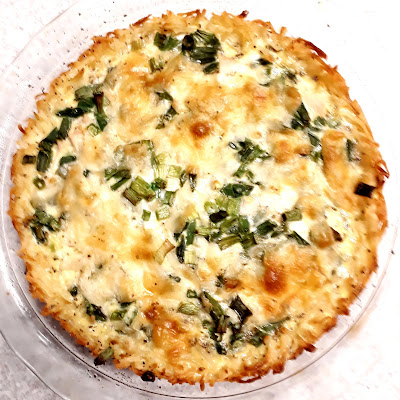 I really love savory pie crusts paired with quiches, my husband not so much. He doesn't mind pie crust if paired with a dessert pie, but couldn't care less about it anywhere else. Hence I never make them and haven't in years.  When I try now I am so out of practice they just aren't that great.
Hence my journey for quick alternatives. Sometimes I let them go entirely and turn the quiche into a baked frittata.  That works well, there are times like last night I want something more filling.  There is no end to the options I've tried from polenta to stuffing and more.  Yesterday I decided to revisit an idea I had used before - hash browns - but with a different product.
In the past I have grated my own and used frozen ones (thawed) with varying degrees of success.  This time I decided to used dried hash browns.  My younger brother has a son who LOVES potatoes in every form at every meal. He found the easiest to make were the Golden Grill Hash Browns at Costco and gave me a heads up.  They are sold in a flat of 12 in boxed that remind me of old school milk cartons.  All you do is open the box, add boiling water, and let set a few minutes.

This are so easy to store where they are a dried product, and easy to cook up in a flash. I've come to love using them as I find they brown much faster and easier than the other options - making hash browns from scratch or from frozen. And you don't have to soak them to get rid of some of the starch.  The boiling water is simply to reconstitute them. I still love using fresh potatoes for most recipes, but for hash browns, this is my go to.
Some of the ingredients I didn't measure so made my bet guess, and for the additions to the quiche I just went with what I had in my refrigerator. For cheese I used giant Parmesan Petals, but they weren't my favorite. I suggest using a shredded softer cheese, one you love the flavor of. I had green beans, chicken and green onions, so in they went. The egg mixture and crust mixture amounts are accurate. Don't be afraid to mix it up and make it your own. Enjoy!
= = = =

Quiche With a Hash Brown Crust
3-4 Servings depending on what you serve with it and who you are feeding
Pie Crust -
1 pkg.                 Golden Grill Hash browns (119g)
Salt, pepper, and olive oil or melted butter or olive oil spray
Filling -
4                          Eggs
1 C                      Milk, cream, milk substitute or a mixture of these
1 C                      Cooked green beans (or your fav veggie)
4                          Green onions chopped
1-1/2 C                Cooked chicken (approx. I used 150 grams)
Cheese - I winged this. I used large Parmesan Petals in 2 light layers (bottom and top). Not my fav. Next time I will use a grated cheese like Guyere or ??? and from checking other recipes it looks like about 1 cup is standard. I will do the same layers.
1 tsp.                    Dried herb - Oregano, Basil, Italian Herbs, Thyme or your fav.
salt and pepper
Optional - caramelized onions, leeks, shallots (instead of green onion), sautéed mushrooms.
Instructions -
Preheat oven to 350 degrees. While heating, open the package of hash browns and pour in boiling water to the fill line. Close top and let set until water is absorbed - about 5-10 minutes.
Prepare a deep dish glass pie plate with a baking spray such as Pam or by coating with some butter so the hash browns don't stick.  Dump the hash browns from the package into the pie plate and press down with fingers or a large spoon until you have an even layer of potatoes across the bottom and up the sides, just like a pie crust.  Sprinkle with salt and pepper. Brush lightly with a little olive oil, melted butter or spray with olive oil. Bake for 20 minutes.
While the crust is baking, mix the eggs, milk and seasoning (salt, pepper, herbs) until well combined.  When the crust comes out of the oven add the filling.  I did a layer of Parmesan petals (will do grated cheese next time), then the chicken, then the green beans, then I sprinkled on the green onion, then a layer of Parmesan petals.  Next I gently poured the egg mixture over the filling, and pressed down on it with a spoon to get most ingredients well coated and in an even layer.
Bake for 40-45 minutes until there are little brown flecks on top and the eggs are set. Let rest for 5 minutes. Cut and serve. Great with salad and hot rolls or focaccia.
cheese chicken crust easy easyrecipe eggs frittata glutenfree greenbeans hashbrowncrust hashbrowns onedish onedishmeal quiche recipe recipes