The Story of a Portrait

on April 29, 2022
I shared the memory of my conversation with the captain on the Smith's Fern Grotto Tour I took while in Kauai in a post called The Importance of "Random Piffle" Conversations. Today I want to share a second.
The Story of a Portrait underlines what amazing experiences can await when you take time to ask someone a question.  The question can come from something they have talked about, or be simply a basic door opening.  Many times it will lead no where, but when it does it is always very special. Trust me, it's worth the effort even if it doesn't often bear fruit. 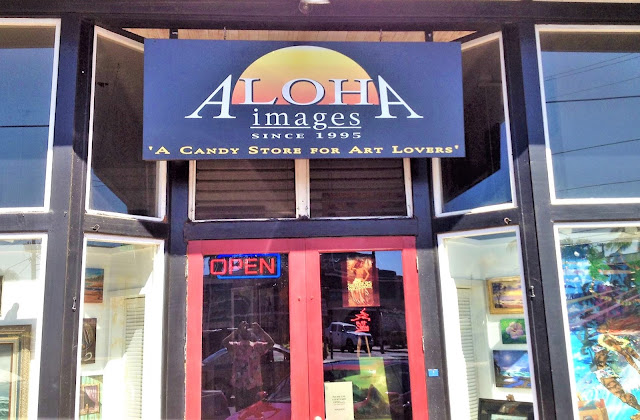 One of the places my friend Rosanne took me when I was visiting her was the town of Kapa'a, Kauai, where she was hoping to find a present. As we were walking up the quaint street, she pointed across the street to the Aloha Images Gallery and mentioned she had always wanted to go in, but it was never open.  We decided to at least peek in the windows and it looked really promising. 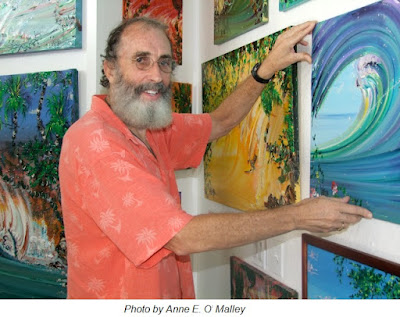 I discovered the main entrance was around the side. When we went there, we could see owner Ray Charron inside, BUT there was also a large sign that said private appointments only, call this number.  Rosanne bravely knocked on the door and when the owner cracked the door open a few inches, asked if we could come inside. I was really surprised when he said he had no customers at this moment so yes and opened the door. The next people who knocked were told no as we were inside.
Walking through the gallery I was so impressed with one painter in particular - Anthony L. Carnabuci - and asked all I could about him. Then after briefly viewing the rest of the artists' work, I ended back at the counter with the owner while my friend  continued to explore.  It was time for a simple question - perhaps a "Random Piffle" - and I simply said, "I hope I make it back here one day. If I do I would love to interview you. Would you be interested?" Usually I just get a yes or no, but today my question led to an amazing experience.

He said yes and that he had a great story. First he shared he found his passion in his fifties when he opened this gallery.  It was a second career for him, and one he truly loved.  Then he went on to offer a an amazing experience from his time owning the gallery that gave me goosebumps. These are the moments I live for.
One day a young man knocked on his door like we did.  When Charron cracked it open, the young man said, "I want to have an art show here tomorrow." After seeing a few pics of the portraits the artist did, the owner decided to take a leap of faith and said okay. The young artist then said I normally charge $5000, but will do them for $3500 tomorrow.  They only take 25 minutes. After hearing this, Charron had low expectations and figured none would sell. But he had already said yes, so decided to ahead with the show. 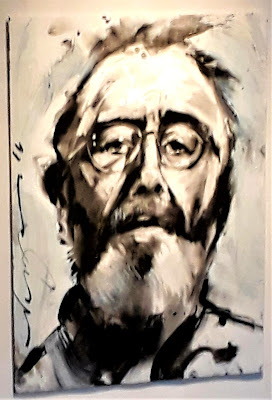 The artist arrived the next day with his supplies and told Charron he wanted to do his portrait first and that he worked on the floor. The owner sat down and the artist put his hand on his shoulder.  He looked right into his eyes and said not to look down, to just look at him. Charron said it felt like he had been hypnotized.  He spent those 25 minutes looking at the top of the artist's head.  Finally he was told it was finished. He looked down and was blown away. He sold two portraits that day and used his commission to purchase his.
At that point, the story ended and Charron excused himself. He went upstairs to his private space and carefully took something off the wall. As he came down the steps he told us not to look until he was ready.  He hung the artwork on a solo wall with a spotlight on it, and then asked us to come and have a look.   I wish I had a professional photo available as this snapshot on my camera doesn't do the artwork justice, but it's all I have.
I stopped breathing for a minute.  It was the portrait that artist created and it was unbelievably, absolutely, incredibly fabulous.  Only 25 minutes, working on the floor and just glancing up - how did he capture the owner so well. There were his glasses, there were his ears, the lines of his face that spoke of his  life journey, his joy and sorrow could be seen in his eyes. This was several years ago and yet it still looked just like  Charron.  I am full of gratitude for the gift of both hearing this story and then viewing this work of art alone in a locked gallery with my friend and the owner. A private moment shared. 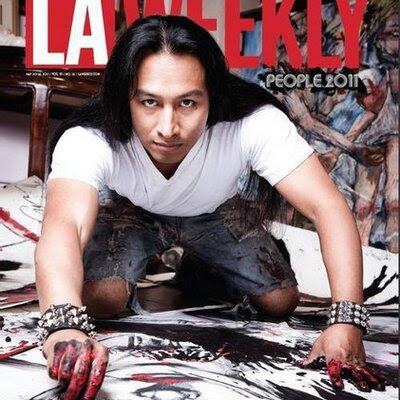 Who was this artist? Was he already famous back then or just at the start of his career? I have no idea. He is, however, famous now. His name is Robert Vargas. While I understand he has done wonderful portraits of many famous people, right now the buzz on social media are the murals he is creating in Los Angeles. You can view his work on his Instagram account at @therobertvargas.
Want to hear amazing stories, have unexpected doors open, or just connect with the world in a deeper way? Be brave. Ask a question.  Express an interest. And don't get discouraged if it takes time to bear fruit. The gems are hidden all around you and you never know when you'll be shown one.
= = = =
To check out the wide variety of wonderful art at the Aloha Images Gallery, visit their website atwww.alohaimages.com. And if you're in Kauai, remember it's by appointment only, so be sure to reach out.
AlohaImages art artgallery artist askaquestion chalk chalkportrait dooropening experiences expressaninterest kapaa kauai makingmemories memories Other portrait robertvargas tourism