On November 7, 2012, The Art Institute of Vancouver's highly anticipated "Atelier Fashion Show" hit the runway at the Red Robinson Show Theatre in Coquitlam.  An advance press release announced, "The audience will be treated to a peek into the designer's studio workshop and see some of the truly beautiful clothes being created there." Grad students showcased young, fresh looks for us to enjoy and it's always a pleasure to see what new elements their creativity has produced. They are the future of fashion.  An interesting show element offered this year were printed postcards instead of the traditional program.  Each designer had their own card featuring one look. The beauty is they can actually be used to send a note or collected like trading cards.  Probably the odd show program is saved as a memento, but I suspect most end up in the trash at the end of the night. Kudos - it's a great concept!

The Atelier Fashion Show opened with a short introductory film and then 3 dashing male models came out to pump up the crowd. Who doesn't love great looking male models strutting their stuff? It worked. There was a palpable energy in the space by the time they exited the runway. Next the audience was blown away when Laura Jackson's strong collection of edgy garments exploded from behind the curtains. These sexy, powerful looks created out of latex had tons of intricate detailing and some serious impact.  I think everyone in the audience sat up a bit taller.  There is a great interview with Jackson on stylist Nicolette Lang-Andersen's blog.  To read it click HERE.


The collections that followed were equally impressive.  Originality and innovation ruled as silhouettes flowed between daywear, evening wear, mens wear, ethnic inspired and lingerie.  Probably in sheer percentages, evening wear had the largest representation.  I loved the use of textures in many garments created with either very interesting, 3D and cut away fabrics or by the addition of feathers, trims, etc. The vivid red in the 2 gowns below by Patrick Zhan and Kristine Mackenzie created a wow factor and Jill Smolkin's suit in the middle would be a great staple in any business wardrobe. 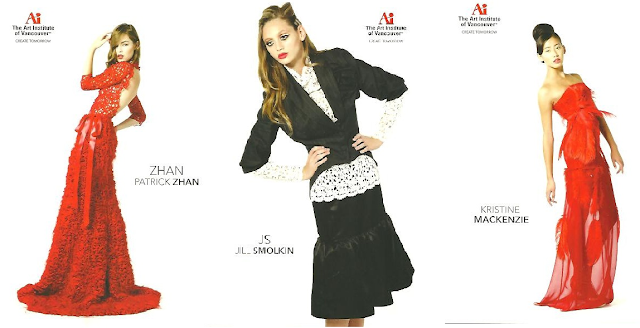 Interesting detailing was also in evidence.  The students pushed themselves hard in this area as the Atelier show truly was about "...a point of view and the skill set to make it happen."  There were a couple great "zipper" dresses.  My favourite was the black evening gown on the left below by Yan Yan with alternating solid and sheer panels.  The 60's inspired dress in the middle by Delayne Dixon was another of my top picks. I loved the contrast of the turquoise graphic paired with the black and white geometric print.  Of course - having Twiggy as the graphic was definitely nostalgic for me.  I remember growing up seeing her images everywhere - even in pattern books.  On the right is a dramatic gown by Trina Marie Cairns. The sheer amount of artistic skill and labour that went into this creation was mind-boggling. This fabric was hand-painted by the designer and the swirling trim accent on the top was laid out and sewn by hand. 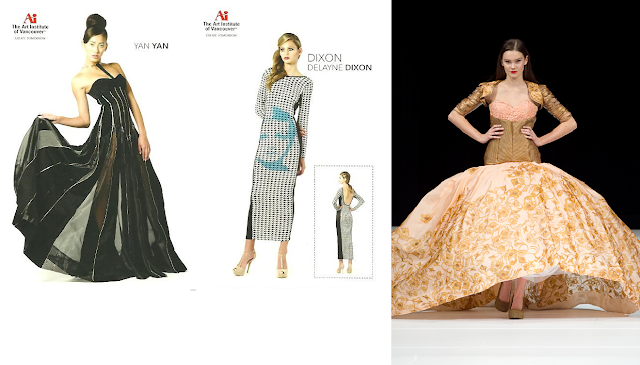 The last two images below don't have a specific theme.  I wanted to include at least one menswear designer and the collection by Aldrin Delumen stood out for the choice of the bright piping used to trim the jacket instead of the standard dark usually seen in the industry. In the first strip of runway photos at the top you can see how he completed the looks by styling with a hat and umbrella. It gave the collection a British feel. The elegant dress on the right by Trina Marie Cairns - yes the same uber talented designer I mentioned above - had it all.  Rich, warm gold tones, interesting textured fabric and a unique silhouette that combined a short dress with a white sheer train trimmed in gold - this dress embodied luxury and the look was runway ready. 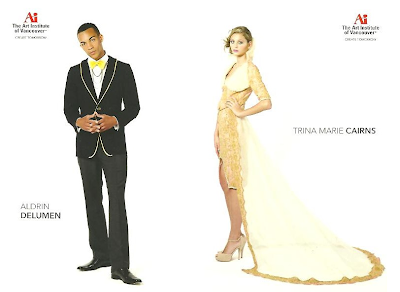 Our evening closed with the announcement of this year's 3 award winners - each receiving a beautiful bouquet of flowers and a few minutes on the runway to bask in the limelight.  Most Marketable Collection when to Yan Yan (creator of the black zipper dress in photo above).  Laura Jackson (black latex garments that opened the show - image near top) took Most Outstanding Collection.  Best Execution went to Nancy Harder (image below). 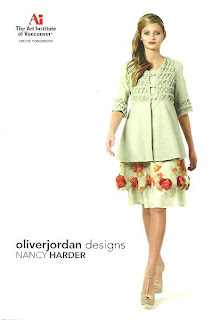 So many people come together to make a successful show like this happen.  Hair was provided by Jon Paul Holt and Stephanie Hoy of Avant Garde Hair Salon.  Make-up was courtesy of Caitlan Calihan of MAC Cosmetics.  Special thanks this evening also goes to all those people who laboured behind the scenes to create the experience as well as the many out front who took such good care of the audience - school staff, volunteers, models and more.