on November 28, 2013
All images courtesy of Peter Jensen Photography unless otherwise noted. 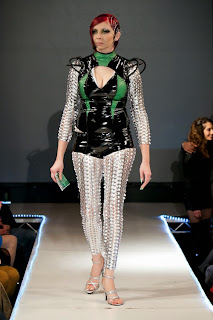 Closing night the theme was Techtopia - "The idea of a world in which humankind has improved by great leaps and strides and life is dramatically improved but by no way perfected, mostly with a great deal of aid by continually improving technology. A concept that would seem likely to many people today."  The audience noise level built each night as we all loosened up and let the designers and models HEAR how much we enjoyed their efforts. Tonight it reached it's peak and I nearly lost my voice. It was fun! Closing night was also bittersweet as, even though the shows were totally rocking, we all knew the party was coming to an end.

The evening's emcee, Kat Kozak (Kat Eye Imaging and VALT Co-Founder), embraced the Techtopia theme by channeling the spirit of a robot/cyborg. Her performance hit the nail on the head. From her truly inspired sci-fi outfit, to the crazy special effects contacts, to her slow controlled walk and gestures, to her deadpan voice - the audience was captivated. When the shows began, we were on the edge of our seats and ready. (Note - loved that at the end of the evening co-founder Kat Ferneyhough stepped on the runway to offer her thoughts and remind us of what everyone had been saying all week - VANCOUVER IS ALTERNATIVE!) 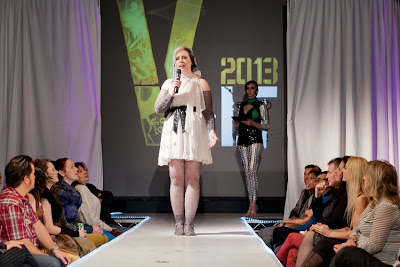 Sex With Strangers - Self described as "The Human League in a bad mood," the band calls their genre of music "dystopia-rock."

Maggie Fu Fashion - Upcycled tops, shorts, leggings and dresses that have been slashed and re-braided into wearable artwork.  I was lucky to meet designer Magdalena Lima Ortega over a year ago through a mutual photographer friend and was so impressed with her work that I wrote an article for this site called Maggi Fu - One-Of-A-Kind Wearable Art. Her show brought fun to the runway this evening with a great mix of models all offering their own version of sass and the audience went wild. In talking with Magdalena, she is exploring other higher end fabrics to create evening wear. Can you image a red carpet dress created with this technique?

Avant-AFI - Unique custom-made clothing, future fashions and vintage created by the design duo of photographer Chris Hutchison and Make-up Artist Joanna Bylo. This team of two captured the techno theme beautifully.  Sleek jumpsuits, bodysuits and separates in mainly black/gray along with great styling accents - such as the orange spiked mask seen below- made for a stunning show.  I particularly loved the bar codes printed on garments. The inclusion of that detail screamed techno future to me. A nice balance of edgy, but wearable looks. Kudos! 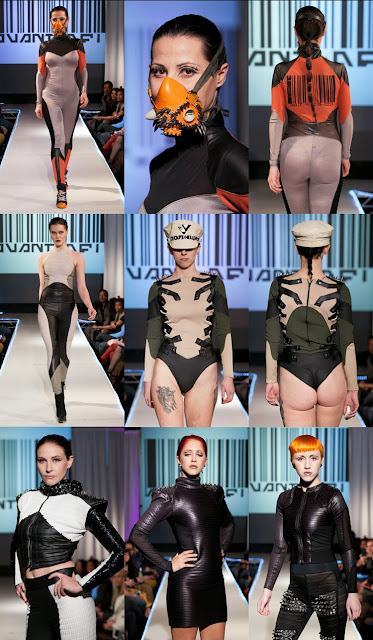 Boring Sidney Hats - Unusual hats of elfin design inspired by fairies, gnomes, elves, hobgoblins. This was fantasy at it's best. Each was unique in it's own right - each look a totally different and imaginative statement.  The first 2 on the left below were ones I would wear with the right outfit given the chance, then we have a feminine tulle number that suggests bridal to me, a top hat showcasing a brain and a chandelier inspired dramatic piece. These are statement making chapeaus for someone who is ready to own the spotlight when entering a room. The designer also offers unique hats for more traditional settings. Be sure to check out their website.

Mitmunk Leggings - Super-soft polyester-spandex leggings with brushed finish, hand-cut in their studio and printed with original designs of armour and chain mail, rich textures, vibrant colours and vintage graphics. I was so pleased to meet designer Wayne Elliott the first day - a truly nice person and uber talented artist.  For this show Elliott used the, "...visual textures of scratched metal armour, circuitry and the skin of beasts, evoking the ordered dysfunction of a society shaped by highly advanced artificial intelligence and genetic engineering."  Kudos to the models for embracing stilted robotic walks that brought this theme home.

Carolyn Bruce Designs - While this designer creates a full range of artisanal offerings, the focus for Techtopia was on her jewellery. Normally jewellery doesn't show well on the runway, but Bruce was the grand exception. Pieces were large, dramatic and unique - detailing easily seen from a distance - each displayed an all black garments that made them pop.  I love big jewellery, so was in heaven. Two favourites were the necklace on the model in the middle below and the great accessory piece on the hat in the image to her right. Obviously I wasn't the only one enthralled as I heard one piece sold right after the show.

Laura JAckson Workshop - Fashion & costume designer based in Vancouver specializing in using exotic materials for unique texturing and finishes. Sleek, sexy and dramatic - this collection was a perfect example of less is more. There was a mix of power and femininity in these looks that drew a strong response from the audience. Interest was created with silhouette and colour, detailing well thought out and well-placed. This was another line that created a few "fashiongasms" in women around me. My favourite look?  Probably the one on the far right, but mainly because it is one I could wear.

The Femstar Evolution - A creative collaboration between Dani (House of Barnes) and choreographer Hannah (Celinski Productions). For Techtopia, the choreography turned to slick, confident and #BAMF's - bad ass mother fucker's! Dancers Dani, Kelsey Merrick, Dylaina Victoria Gollub, Madi Harris & Justine Kirk again brought their own brand of mega-energy to the runway. Backing them was a 3rd original film created for their VALT performances - directed and produced by Victor Culpin. Costumes designed by House of Barnes and assistant Jayce Gowler (and sponsored by Boo La La Costumes which also provided the wigs) were black with a fringed purple sequins skirt that caught the light and added to the movement. The dancer's dramatic eyes and textured scaley skin detailing were created by a great backstage team - make-up by Elizabeth McLeod and airbrush artists Tracy Cake and Ashley Rose!

Dark Arps - Solo artist Jonathan Bierman sound is a mixture of techno, breaks and progressive house, overlaid with synths, sampled instrumental melodies, warped tonal textures and atmospheres, and supported with incessantly infectious beats and basslines. It is music for the head, heart and feet. 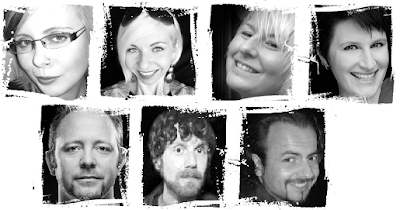 Hair and make-up for the runway shows provided by New Image College of Arts. 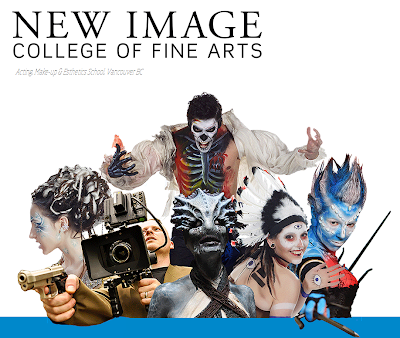