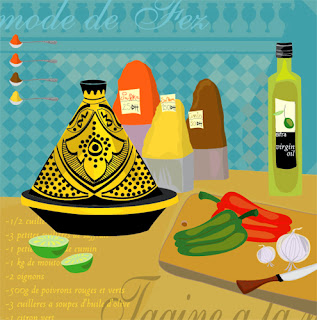 With two-income families the reality for most today, eating home cooked food at night is a challenge. This is especially true once you have kids and they get involved in activities both after school and in the evening. Crockpots, casseroles and more have eased the burden but it still takes time to prepare each dish individually.

Over the last few years several talented individuals have come up with ideas to help. Probably the most innovative is the one day of prep to create up to 40 Slow Cooker dinners. Frozen bags of ingredients are plopped in the crockpot in the morning and you come home to the smell of a finished meal at night. A few examples to check out are - Crockpot Slow Cooker Freezer Cookbook which offers 40 meals prepared in 4 hours, 20 meals in 2 hours, and 10 Slow Cooker Freezer Meals (the Coconut-Chipotle Chicken Stew is calling me). There are many many more sites out there with recipe ideas and preparation tips.

When my daughter received a crockpot for Christmas, I gave her a super easy 5 ingredient cookbook to get her started. Simple recipes are a great way to get a feel for what works in a crockpot and what doesn't. Then I started thinking about easy recipes I make at home. I remembered a show that helped people learn how to cook once and create 2 meals from it - one for now and one for later. I personally am a bit overwhelmed by prepping 40 meals at once and I honestly don't want everything I eat to come out of a crockpot as much as I love it.  So here's my take on a hamburger mix that can be used half in today's dinner and then later in the week in a crockpot soup that is perfect for a busy day. The second half could also be used in any casserole that uses cooked hamburger and onion or with additional seasonings, used to fill tacos and burritos. 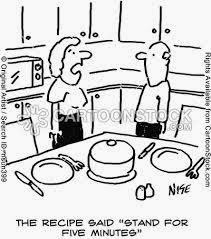 Add Ground Beef, onion and garlic (mushrooms and celery if desired) to non-stick frying pan and saute until all red is gone from meat and the onion is soft.  Drain and split evenly. Half goes back in the frying pan and half needs to be cooled put in a large Zipoc freezer bag. Squeeze out all air, seal and then store in the freezer until ready to make the soup. I would use within 2 weeks.

Option 1 - made with commercial spaghetti sauce
This is as easy as it gets!!!! You could probably cook in the crockpot as well, just be sure it's on low. For the crockpot you would also have to either layer them or stuff them as whole peppers standing upright.

Cut bell peppers in half from stem to bottom - the halves will rest on their side in the pan.  With small knife carefully remove stem and take out ribs and seeds from inside. Lay in 9 x 13 or 8 x 12 baking dish that has been Pam'd.

Combine hamburger mix, cooked rice/quinoa and 1-1/2 cups spaghetti sauce (or less if you like a dryer filling. Spoon into the 6 pepper halves dividing evenly. Cover with foil and bake in a 350 F oven for 50 minutes.  Remove foil, sprinkle on your favourite cheese and return to the oven for 10 minutes. Adjust cooking time depending on how soft or firm you like your peppers.

Note - pretty easy to increase this to 4 peppers - 8 halves. Prep 3 lbs of meat and divide (your soup will end up meatier as well) and increase the rice to 2 cups. Sauce to mix in and cover might work as is, but I would be prepared with a little extra in case. You'll have to eyeball this.

Option 2 - crockpot recipe adapted from a recipe at Family Fresh Meals.
This recipe uses the peppers whole. I have given reduced amounts for the 1 lb. hamburger mix above. Then in parenthesis have give the 1-1/2 pound version that will fill 6 peppers.

Cut the tops off the peppers. Remove seeds and ribs from inside. In a large mixing bowl, combine hamburger mix, ½ of the tomatoes, cheese, egg, salt and pepper. Mix well until evenly combined. Fill peppers and stand in crockpot. IF only making 4 and they are tippy you could wad a small foil ball and place in the middle. Pour stock over and around peppers. Next, pour the rest of the canned tomatoes in. Cover and cook on HIGH for 5-6 hours or LOW for 8 hours. 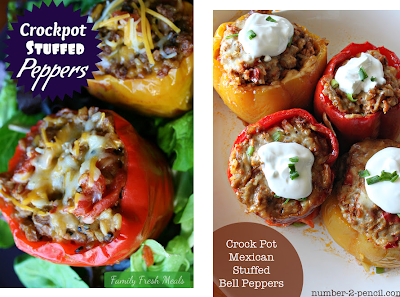 Option 3 - Mexican inspired crockpot recipe adapted from a recipe at No. 2 Pencil.
A great twist on a standard with a bit of zip. I would start with 1 Chipotle Pepper and 1 T Adobo Sauce and then add more if you want it spicier. IF you want it milder, I would use regular jack cheese instead of the Jalapeño jack. 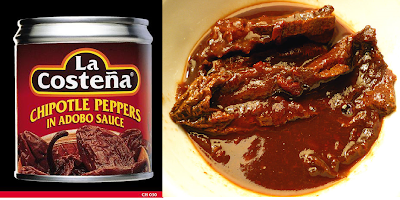 Place 1/3 cup water in bottom of crockpot, then nestle in the peppers so they stand upright. Cook on low for 6-8 hours. They suggest putting the last 1/4 cup shredded cheese on before cooking, but I think it should be added near the end, just long enough to melt it.

Absolutely disliked the first recipe for soup I posted once I tried it, so even though this takes a bit more work, I'm hoping this one is tastier.  It's on my menu list for this week. This came from the same website as the previous one - Southern Food - but I made a few changes to try. The original recipe added 1 package of dry onion soup. As there is already bouillion, season salt and soy sauce I feel there's enough salt and broth already and I have real onions in my premix. If it lacks flavour, I can always add another cube of bouillon at the end. I also changed the 8 oz can of tomato sauce to a can of diced tomatoes as I prefer the chunky bite.

1/2 of hamburger mix above


Combine all ingredients except pasta in a 5 quart slow cooker. Add water to within 1 inch of top. Cover and cook on LOW 8 hours. 30 minutes before serving, cook the pasta separately in boiling salted water.  Drain and add to crockpot. Mix well and serve immediately. Great with fresh, soft dinner rolls.

NOTE -  You could also substitute an equal amount of fresh. Hardier varieties such as carrots and green beans take longer to cook so need to go in at the beginning. Vegetables such as broccoli, cauliflower and zucchini would need to be added near end - probably the last hour, but you'll need to experiment - as they fall apart quickly.

There are lots of other soup and chili recipes for the crockpot out there that can be adapted to use the prepared and frozen hamburger mix at the top. If you find one that you think is amazing, send me a link and I'll add it to this article.
Adobo sauce Chipotle peppers crockpot freezer to crockpot hamburger Mexican stuffed peppers recipes rice slow cooker stuffed peppers vegetable beef soup