It All Began With A Blushing Design Skirt

on July 14, 2015
Sometimes an outfit comes together organically. It starts with a clothing item, a piece of jewellery, a hat or even just an idea and all falls in place. But the more likely scenario is you end up banging your head against the wall because you can't find the bits you need. If someone's really motivated and has the skills, items can be made from scratch. But more often than not, we give up and move on to a back up plan. This is one of those amazing experiences that just doesn't happen very often. Everything came together beautifully and it all began with a Blushing Designs skirt.

Last season I was watching Vancouver designer Shelley Klassen's Blushing Boutique runway show at Vancouver Fashion Week. Ava Vanderstarren (model, actor and co-founder of Innocence Lost Foundation) came down the runway sporting an outfit that caught my eye. The skirt was in a bright aqua colour that made me smile and had a feature seam front and back with a gathered detail. I love asymmetry and subtle details like this. The skirt was paired a short, tummy baring black top that I also liked, but I would need an underlayer as my abs just don't look like Ava's.

Several times I commented on this skirt and let Klassen know how much I coveted it. Then one day it was mine! The skirt came in a great fabric with a touch of stretch and was fulling lined. The designer even made a few minor alterations to make sure it fit perfectly.  I also grabbed the black top after discussing with Klassen a way of pulling the two pieces together with a third layer as the bare tummy look won't work on my body.  Look complete, I could hardly wait to debut this new outfit. Then things shifted left.

I was honoured to be attending Maria Kritikos' Ladies Who Lunch Annual Garden Party at the Arbutus Club. The colour of this beautiful aqua skirt seemed the perfect choice, but I didn't want to wear a black top with it. On went the thinking cap. I had a white, tunic style blouse with cap sleeves that would work. It was a little long to show off the skirt properly, but the best choice overall from my closet options.

I also had a great textured handbag - a bonus as I don't have a great handbag selection, I always end up buying shoes instead. And I had some jewellery that was on point. But I still needed a garden party hat and the only one in my possession was black - again not a good choice. With 24 hours to go, I headed out on a mission.

First stop was the Richmond Centre Mall.  As I was speed window shopping for ideas, I spotted a small dot of turquoise/aqua on a 50% off shoe rack in ALDO Shoes. Holding my breath, and trying to keep anticipation at bay, I wandered in.  They were perfect. The style was the same as an amazing pair I modelled on the runway at the Ladies Who Lunch Holt Renfrew show, but couldn't afford. The colours - Turquoise to Aqua - were bang on. I adored them. Regularly $100 - they were reduced to $50, a price I could just swing. The sales clerk was not too positive when she heard my popular size 9, but her beaming face when she returned from the back with a box in hand said it all. I didn't even try them on before purchasing.

My next stop was Michael's.  Perhaps I could come up with a few simple craft items to make a DIY matching fascinator. EUREKA!  I found a hand-tied, large, organza bow in the perfect shade of Aqua, two feather buttons in a colour scheme that would work, one feather pad in Aqua/Purple, a spray of white feathers (called a feather hackle) and a decorative charm with crystal accent.

Another miracle was finding my old glue gun.  We just moved last September and I still have tons of boxes unopened.  But there it was - waiting in a bottom drawer in my home office. This was just meant to be. Ten minutes of playing around with lay-out possibilities and I had the design worked out, everything glued in place and clip attached. 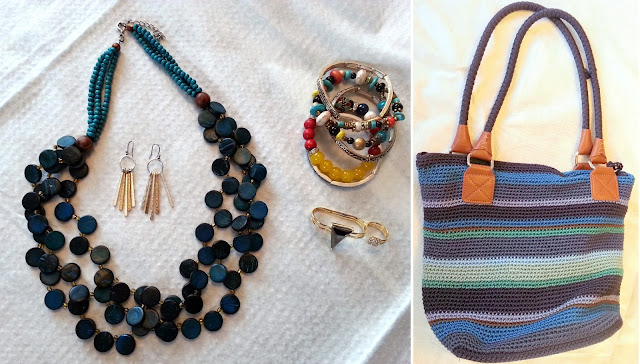 It was with great pride I showed up at the Garden Party. While the blouse did need to be a bit shorter and a little more fitted - I felt overall it came together well, right down to the colourful accent accessories. It was also a great story to share. The opportunity arose often as many were at the Holt Renfrew show and thought I had bought that amazing pair of expensive shoes.  Having a story to share is great ice breaker to open the conversation when you meet new people. Now I can't wait to wear this skirt again with the original styling I had in mind that will show it off so much better.

Thanks to Shelly for allowing me to add this wonderful skirt to my wardrobe and to Maria for her amazing networking event where I was able to show it off.