on September 25, 2015
"Inspiration is everywhere… one only
needs to touch something and the process
starts automatically… often at an alarming speed! I love making my work unique
and fun… and making YOU stand out!
- Carolyn Bruce

I still remember the very first time I saw Carolyn Bruce Designs on the runway at VALT (Vancouver Alternative Fashion Week) 2013. Big, fabulous, unique jewelry is a personal passion and the designer's show offered a candy store of fabulous steampunk pieces. WHO WAS THIS ARTIST AND WHY HAD I NOT MET HER BEFORE?

As soon as a break came, I hightailed it over to the media wall to try and make a connection. Other than, "I love your work," it was an utter failure. Bruce was surrounded by a sea of admirers and had even sold a piece right off the runway to someone from out-of-town. 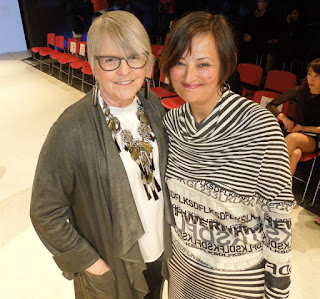 Next stop - Facebook. One of the beauties of this social media platform is the ability to connect and connect I did. I guess I didn't come across as too pushy as over time we began to become friends. When the next Vancouver Fashion Week came around, I was one of the first to sport a statement-making Carolyn Bruce Design necklace - a piece with beetles, bugs, spiders, spiderwebs and spikes. It was a huge hit. People would cross the floor to view this couture creation and then be surprised by the findings. It proved a great conversation starter and helped open several doors.

Next I took that same necklace to an event at Holt Renfrew with the same results. Conversations
with media and other guests would open as they sought out where I found my unusual necklace. The fact that it was a local designer was an added bonus.

Now when I walk into any occasion, I see Carolyn Bruce Designs sported by many in attendance, I am but one in a crowd. No longer an unknown designer, she has grown to become a must have brand with pieces seen at high end events and being worn by celebrities.

Want to know more? So did I. Although we have talked many times, the conversation never really covered her journey to becoming a designer and where her inspiration comes from. The inside scoop can be found in the behind the scenes Q and A below.


Where were you born?

What were you like as a kid – as a teen?

For as long as I can remember I have made things. My mother would go out and sell them for me. I have always had an entrepreneurial brain, wanting to make things, then sell them. I thought I would have been a millionaire by now. Lol.

Looking back can you remember a story from your childhood that shows a hint you would become such a unique artist creating edgy jewelry?

During the 60's I made love beads in long strands. I even made the nuts beads and added washers to make them unique and different than other necklaces I had seen. I just recently found one at my parents when I last visited them in New Zealand in July, had a laugh and brought it home with me.

What is the process for each piece you design - Where do you find inspiration?

A piece often starts by just touching something, almost anything. It can be frightening when out shopping with a friend as sometimes once I’ve touched a certain object, I get vision streams that come into my head so fast. The pieces literally almost speak to me themselves and the visions of the pieces comes from that initial touch. Sometimes I let go of things I am touching quite quickly as the visions can start to pour so fast it's startling. I make it stop by releasing the object.

Once I have decided on a piece - and I am back in my studio at home - the pieces start to grow organically. They kind of call out to me, but they don’t always automatically go together the way I envisioned.  First I lay them out in a design. I enjoy the engineering challenge I get from putting the findings together and - even though they may be totally unrelated - have them look like they belong together  I think that’s what intrigues people about my pieces. Organically a kind of story seems to evolve out of them as they are being made and people like to look at them and imagine what that story may be or create their own story. It is much like the way people look at a painting and each person will have their own version of the meaning of the painting.


How do you decide which findings to use? It just grows organically, that part is very hard to explain.

What is most interesting about the process? My creative stream is like an avalanche of creative visions that fall from my mind. Sometimes, before I even have one idea out, they overlap. They can be totally unrelated and just stream out of my mind. Then what happens is the ideas can back up in my mind. I have several pieces, maybe even up to 50 pieces sometimes, in varying degrees of completion and they’ll all be in partial stages of being assembled. Some fly out and are created in minutes. Other are developed over weeks or months.

What do you love most about being an artist?

Creative Freedom. You get to express the inner workings of your head in physical form. 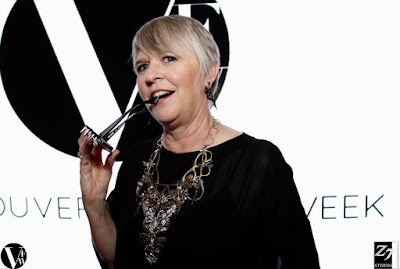 What is your biggest challenge?

Organization. It’s not a skill that enters my head very often, “Out of chaos, Creativity emerges” is a very appropriate saying for me. I can’t stop the streaming of creative thought.

You've created so many truly unique looks from glitzy, to coloured to dark. Do you have a favourite piece?

Yes, I like the horn piece from the first Valt I did in 2013, and my red and brown jade piece titled “Made by the Aliens.” They are powerful pieces - they emanate something. When you wear them it makes people stop in their tracks. I’ve worn both of them at several events and just wearing those pieces makes you somehow walk differently. They make people stop and look. You mean business when you wear those pieces, you feel it.

I know your brand offers more than just jewelry. Can you share some of the other unique items you offer.

I also make skull bottle stoppers and cocktail picks. The skulls have now been incorporated into dancing earrings. I also have the tea infusers, miniature teapot beaded pendants, and the bookmarks and crystal tree jewelry for Christmas, Diva Danglers for purses and Dog Danglers for dog collars. Then I have my lizards and dragon fly wall hangings, paper mache wall masks and mixed media wall hangings. I am an Artist through and through with an architectural background and a mind that doesn’t stop, that exists on little sleep. If I am inspired by touch and this flow of creativity, I will literally create almost anything.
What do you have coming up in the next 6 months?

Sept. 26th Brilliant Fundraiser for St. Paul's Hospital - a fashion runway show, live dance and vocal performances, along with silent and live auction. I am designing for the entire Seven Dwarfs and the Huntsmen section..
Oct. 23-25th Fraser Valley Bead Show - I will be showcasing both my work and some unique findings. Donations will be accepted for Beads of Courage, a program that uses beads to mark major milestones in the lives of children suffering from serious illnesses.

Nov. 27-29th Gifts Galore 2015 Show - A holiday craft and artisan fair that features local BC artists. Gifts galore was founded by JoAnn Gillies and myself in 2012.. The Grand Prize of the raffle is a $150 Shopping Spree, which is announced the last day of the show.


How do you define success?

Acceptance by people - whether they be general public, or friends and family - of what you do. Taking the jewelry and pushing it to places it’s never been before - like having it in an Art Gallery, hanging on the wall or having it showcased on the runway as the star itself.  My works are wearable pieces of art. They are Stand Out pieces for people that want to make a statement.