Fleeing the Hijab, A Jewish Woman's Escape from Iran by Sima Goel 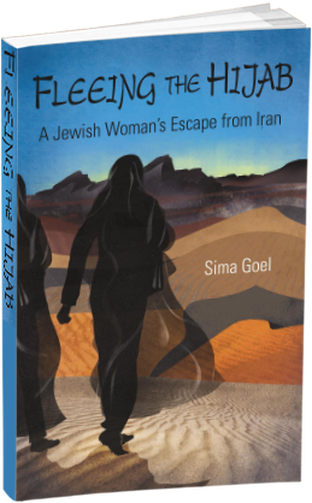 Fleeing the Hijab is a vivid portrait of a dangerous journey made by two teenaged girls through the Iranian desert to Pakistan, where, as homeless refugees, they struggled desperately to find some way to escape to the West. It is a story that needs to be heard and remembered.

A true account of Sima Goel, the Iranian teenager who crossed the most dangerous desert in the world rather than accept the restrictions of life in Iran of the early 1980s. Her quest for freedom is a thrilling, timely inspiration for people longing to create a life of meaning. It was the last straw!

The Ayatollah Khomeini had decreed that all women in Iran must wear the hijab, whether they were Muslim, Jewish, Christian, or Baha'i. Thirteen-year-old Sima had gone out into the streets of Shiraz to demonstrate for freedom under the Shah's oppressive rule, and now that he had fled the country, this was the result: a new regime, and a much more repressive rule. The changes Khomeini's regime forced on the population were totally incompatible with Sima's ambitions and sense of personal freedom. Blacklisted by her school, unable to continue her studies, mourning the murders of innocent family members and friends, and forced to wear the hijab, she realized she had to leave her beloved birthplace and find a country where she could be free to follow her dreams.


As someone who interviews people on their life journey, I was strongly drawn to review Fleeing the Hibab, author Sima Goel's true story of having to flee her beloved homeland.  My surprise came when I read the opening notes to discover this journey happened over three decades ago.  How would the author recreate those memories so many years later?  No worries.  From start to finish her intricate and detailed memories shared from the heart bring this story to life as if it was yesterday.

Several things stood out for me. Goel's love for her homeland comes through clearly - it's natural beauty, the wonderful culture and the food and the sorrow she felt at having to leave despite the fact her life was in danger. And her hopes that true personal freedom will one day again return are there as well. I felt the author also laid out how fear for your life and social pressure can change people. One of her worst enemies at school was a former friend. Lastly she opened the door on what a cycle of dependence being a refugee is. It is often a trap from which escape is difficult.

From Goel's need to hide at home, to her frightening escape across the dessert on foot at the mercy of men she did not know, to the frustration of being trapped as a refugee, to her final plane flight to freedom - the reader is drawn into her world both physically and emotionally. This book is as relevant today as when the events originally happened. A great eye opener for those living a life of great freedom in North America. 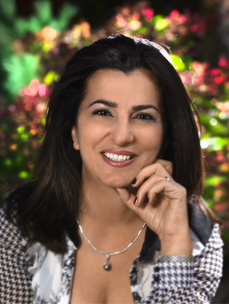 Iranian-born Sima Goel has always had compassion for those who suffer. Her instinctive need to speak out against oppression ultimately resulted in unwanted attention from the authorities, which led her to flee her beloved Shiraz and eventually to Montreal.

Sima Goel is a self-made woman. Her journey to freedom, recounted in her memoir, Fleeing the Hijab, A Jewish Woman’s Escape from Iran, reflects her belief that, without freedom of choice, life is worthless. She is a strong advocate for the disenfranchised and the rights of all, specifically the rights of women. With the publication of her book, Sima has fulfilled the promise she once made to herself: to speak out and share her truth that freedom is the most precious commodity of all.

Wellness chiropractor, health advocate, inspiring author and an in-demand speaker, Dr. Goel considers her most important role to be that of mother to her two teenage boys, and wife to her beloved husband.