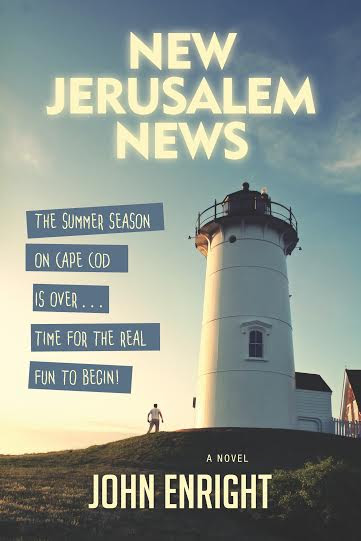 The summer season on Cape Cod is over -
now it’s time for the real fun to begin.

Synopsis -
Dominick is always just passing through. He is a professional houseguest who follows the sun and the leisure class from resort to resort. But this winter he lingers on a quaint New England island and in spite of his best intentions becomes involved in the travails of his eccentric geriatric hosts. An environmental protest against a proposed liquid natural gas terminal turns ugly, and by accident and happenstance Dominick becomes a mistaken suspect in terroristic bombings. But the book, of course, is really about its characters. None of them are young—white-bearded men and blue-coiffed women busy with aging, dementia, and ungrateful children. Dominick strives to float above it all in a life of itinerant escape. A New England comedy of sorts, New Jerusalem News, on another level, is an extended meditation on history, identity, and what it means to drift.

New Jerusalem News is a work of fiction set on an island in New England. Reading the synopsis is a bit misleading at the start. The plot sounds like high intrigue and fast action. Nothing could be further from the truth. But the statement that the book is all about the characters is bang on, and to focus on the characters means a slower pace to the story telling. This presents a challenge for writers. How do you keep the reader turning the page when there isn't constant action?  Enright manages beautifully in this well written book.

The main character - Dominick - is a professional house guest who uncharacteristically ends up spending winter months on a quiet island in the home of an elderly couple - Atticus and Lydia. While he tries his best to never get involved in the lives of those he bunks with, he finds himself slowly and increasingly entwined in their struggles - an environmental protest gone bad, health issues, a difficult daughter and more. He also finds himself in the spotlight as the main suspect at the center of a government investigation.

Over the course of the story we are introduced to several other interesting locals. Each comes alive as we listen to them speak and watch them interact with other. And fun is made of bureaucracy - how single minded the focus can be and how once wrong decisions are made, the cover up begins. Truth, and history, are written as you go along. I thoroughly enjoyed this book and consumed it cover to cover.

Check out my interview with author John Enright HERE! 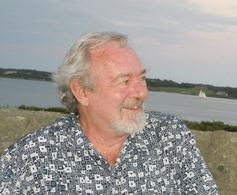 Originally from Buffalo, New York, John Enright holds a bachelor’s degree in literature from the City College of New York and a master’s degree in folklore from the University of California, Berkeley. After working in magazine journalism and book publishing, he left the U.S. to teach at the American Samoa Community College. He remained in the South Pacific for 26 years, directing environmental, cultural, and historical preservation programs and writing extensively about the islands.